Like machine vision, microscopy has traditional roots as a discipline unto itself, and a new life as an enabling technology that has affected scores of scientific and industrial applications.


Ask a microscopist what they do, and they’ll usually describe complex compound instruments that bring together a selection of high-magnification optics, stages, illumination sources, data capture, and other technologies for biological and materials research and development (R&D). However, as industries as diverse as semiconductors and pharmaceuticals use an increasingly common technological tool set, the definition of microscopy is colored depending on the end user.

Today, food industries around the world use low-magnification tools to guard against potentially dangerous pathogens and toxins that bare little resemblance to the traditional compound microscope. Outside the medical lab, electronics, flat-panel, and semiconductor industries use application-specific microscopes designed for offline quality inspection and failure analysis. Conventional medical microscopes, meanwhile, are segmenting into instruments that are smaller, cheaper, and easier to use for emerging markets at one end of the continuum. On the opposite side are systems that are highly automated for point-of-care and R&D applications in developed countries.

Let’s look at how machine vision hardware – including sensors, solid-state lighting, and optics – is helping to reshape the microscopy industry and make it more useful to a greater number of markets.

A Tale of Two Directions

“Microscopy itself is a huge field, but when you look at the common light microscope, there are two trends going in opposite directions,” explains Mike Bode, President of XIMEA Corp. (Golden, Colorado). “One trend is definitely to make the microscope smaller and easier to use for a number of industries by putting the camera directly into the instrument while reducing the variety of optics, filters, and other elements 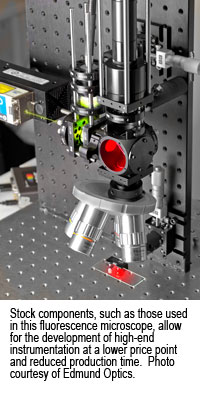 connected to the microscope – essentially building the instrument for a specific medical or industrial purpose.

“The other trend,” Bode continues, “targets the clinical and R&D side that still require complex microscopes but use automation to make scientists and doctors more productive. Slide scanners are one example. These systems automatically scan an entire slide at high resolution, generating massive images of several gigabytes that a doctor can review at a later date without sitting in front of the microscope and manually moving the slide around. Both trends could potentially profit tremendously from the new smaller and faster USB3 cameras such as XIMEA’s line of xiQ cameras.”

According to Greg Hollows, Director of Machine Vision solutions at Edmund Optics (Barrington, New Jersey), microscopy applications are following many of the same drivers of the semiconductor industry. “There’s a need for instruments that are smaller, faster, and cheaper, just like everywhere else,” Hollows says. “As medical needs of an aging population continue to grow and emerging markets demand better medical services, the market is seeing a need for additional medical testing. This is creating two main types of systems.

High-end systems, for large medical institutions, perform a large number of tests with high accuracy.  These systems are typically higher cost, with fewer deployments and require highly skilled technicians.  Another set of instruments are designed for selective testing, such as malaria, tuberculosis and other diseases, are intended for large scale deployment. As a result, these systems need to be smaller, cheaper, and easier to use – without the need of a doctor to run them. However, excessive cost pressures can lead to limitations in the components which can be utilized in these types of systems.”

“Cameras like our Flea3 USB 3.0 offer several benefits for automated microscopy, cancer screening, cytometry, and cellometry,” explains Mike Gibbons, Sales and Marketing Director at Point Grey. “Our life science customers want to be able to access the exceptional imaging quality and sensitivity of today’s CMOS and CCD sensors from a wide range of USB 3.0-enabled desktop and laptop computers. Applications like automated slide scanning require multiple images – in the hundreds to thousands – to be captured per slide. Many of today’s image sensors offer both high resolution and very high frame rate, which can help speed this process, and the bandwidth of USB 3.0 is critical to supporting this.”

“When it comes to high-end microscopy systems where performance is critical,” Gibbons adds, “cameras like Point Grey’s Grasshopper3 offer low noise with high dynamic range and excellent quantum efficiency (QE), along with exposure settings from 0.3 ms for high-speed scanner systems to 30 seconds for ultra-low-light fluorescence applications.”

XIMEA’s Bode adds that new SCMOS (scientific CMOS) cameras are making inroads against charge-coupled device (CCD) sensors, which have always been the choice for imaging applications that require the best QE and artifact-free images.

Although cameras in every cell phone and the move toward solid-state lighting for residential and architectural lighting are driving down costs while expanding the capabilities of sensors and lights for all machine vision applications, including microscopy, lenses face physical restraints that are not as easily overcome.

“If you’ve ever zoomed in on a cell phone picture with an 8-megapixel built-in camera and seen how grainy and poor the image is, then you’ve seen what happens when you poorly match a sensor to a lens,” says Edmund Optics’ Hollows. “Many customers want smaller and cheaper optics that perform at better than the diffraction limit, and that’s simply not possible. There are ways to overcome these constraints, such as using non-visible light with very short wavelengths, but that creates other problems and carries a big cost. The bottom line is the there are a lot of drivers in play right now that are changing the dynamic of the game in ways we can’t anticipate. Automated systems that use fluorescence to find food contaminant were not considered microscopy applications a few years ago, but I would counter that machine vision is blurring the line where food inspection – for example – and microscopy overlap. While the human eye hasn’t changed much in the last several hundred years, we’ve seen massive changes in the way we image objects in just the last few decades.”