Using modeling and simulation, design teams can develop controls solutions in parallel with mechanical design, minimizing prototyping to save costs and get products to market quickly. 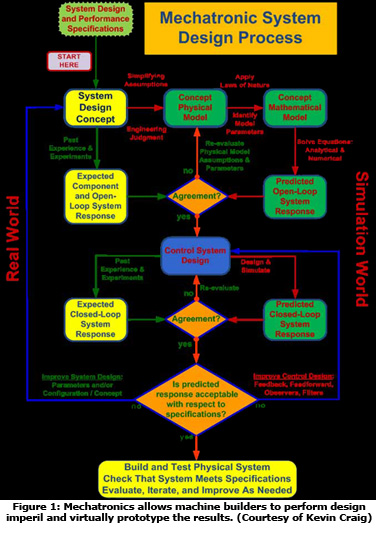 was a time machine building was a four-step process: design, build, test - and hope that it worked. Today, OEMs increasingly leverage modeling and simulation tools to increase their success rates. Using mechatronic principles, they can increase innovation while reducing risk. In 2009, we discussed mechatronics (See Part I and Part II) in the abstract. Now, let's look more closely at how early adopters are finding success by applying a systems-level approach with detailed modeling.

The established flow in machine building has traditionally been that the mechanical engineers design the overall structure, and then bring in the electrical engineers, who hand over the system to the controls engineers, who pass it along to the software engineers. At the end, finally, everybody joins together to troubleshoot the results. Because troubleshooting is almost inevitable in this kind of a silo environment, there can be friction between disciplines.

Mechatronics allows teams to discover mechanical problems before, rather than after investing in a physical prototype (see figure 1). “The benefits of mechatronics basically span all the way from visualization to getting information about the dynamic behavior of the mechanics," says Christian Fritz, Senior Product Manager for Advanced Machine Control & Robotics at National Instruments (Austin, Texas).

Consider robotics and positioning design firm Square One Design Inc., a client of National Instruments, which delivers custom automation solutions for a variety of markets. Tired of starting from scratch with each project, the company decided to develop a flexible platform that they could easily modify to meet customer requirements, both from a mechanical standpoint and from a controls standpoint.

The process was easier said than done. “It was a challenge for them, especially the control design team; to test out a control system that would be able to handle all those variations would either require a lot of guessing or a lot of physical prototypes”, says Fritz. Instead, they elected to combine virtual prototyping tools with a CAD model to experiment with the behavior of the physical system in virtual space (see figure 2).

Their efforts produced an easily customizable platform. Now, they can present customers with a detailed model of the product up front, secure in the knowledge that any major mechanical problems have been worked out. In the event of customer change orders, the engineers can run a simulation to ensure that the control software will work, that there will be no unexpected mechanical problems like collisions or resonant vibrations from excess compliance introduced by the modifications.

Virtual prototyping in action
Biorep Technologies, another NI client, produces analytical instruments for isolating human pancreatic cells. It's a complex process that led to a first-generation instrument that sported 20 different subsystems, including five with multiple axes of motion. The controller required a different platform and programming language than the HMI, which required a different set than the servo and stepper motors. 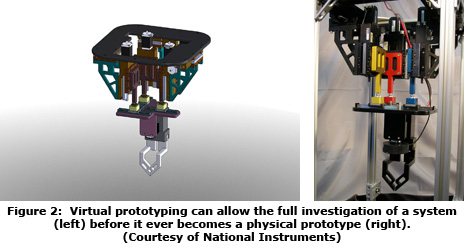 When it was time to start Biorep’s next-generation product, the design team decided to start from the beginning with a modular platform developed using model-based design. The approach allowed the Biorep to easily customize the instrument for different users while streamlining their supply chain, simplifying training from learning four hardware/software platforms to one, and cutting maintenance costs.

The new platform features multiple axes of coordinated motion. The company used a CAD program and modeling software to develop and test a number of virtual prototypes, simulating system response to various motion profiles. Not only were they able to avoid costly mistakes, they were able to cut their development time in half while working with off-the-shelf control software and drivers.

“Their goal was to parallelize the design process," says Fritz. "Virtual prototype technology basically allows the controls engineers to start working on a control design long before there is a physical prototype. For small design teams, especially, this is one of the big advantages."

One of the biggest benefits of mechatronic approach is that it makes the design process more efficient. Rather than mechanical engineering dumping pictures of a prototype in the lap of the controls engineer, they can involve the controls engineer right from the start. The kickoff CAD design doesn't necessarily even need to carry a significant amount of detail, just the main masses and inertias. “The links of a robotic arm, for example, can be modeled as solid bars with equivalent inertias,” says Aderiano da Silva, Global OEM Technical Consultant at Rockwell Automation (Mequon, Wisconsin). Well before the final design stage, the controls engineer is armed with enough data to begin working on the control structure and code. If they discover issues with dynamic performance of the mechanical system, they can raise them to the overall project team before prototyping ever takes place (see figure 3). “Mechanical, electrical and control design can be developed in parallel and in an integrated manner, instead of in series, which is the traditional method for machine design,” he adds. The result is faster R&D with lower cost. 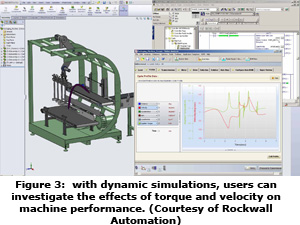 Once the motion profiles exist, the design team will know the torques that they need for each axis. They can proceed to selecting motors and drives, testing them in the virtual system to examine the dynamics, searching for compliance issues. By the time the first physical prototype gets built, there's a high likelihood it will perform as desired without major problems.

Of course, that doesn't eliminate the need to fine-tune the system to address any residual resonances. It won't indicate how to damp vibrations, but it can be used to model the effect of damping so that engineering can determine whether their response is effective. Mostly, model-based design helps guard against ugly surprises when the physical prototype gets switched on. It streamlines the development process so that there is more time at the backend of the process for the control engineers to fine-tune the real, physical system and optimize it for higher performance.

The freedom to start fresh
Mechatronics also opens the way for innovation. Because of the cost penalty involved, machine builders don't tend to start designs from scratch but rather jump off from existing models. Virtual prototyping allows them to explore new concepts without spending large amounts of money on a series of prototypes that may or may not work. "They can make changes and run a simulation to get a feel for whether it really is a good idea - or if it just seems like a good idea on a Friday afternoon,” says Fritz.

Fritz points to another medical customer who produces fluid-dispensing machines. Their basic design used a high-speed lead screw to move a filling head among closely spaced vials. The lead screw did the job without any compliance issues but that type of actuator is not only heavy and costly, it requires regular lubrication, which can create a contamination problems frowned on in the pharmaceutical industry. The company sought to update their design with a lighter, cheaper, cleaner, more robust actuator technology such as a belt drive.

It wasn't an incremental update but a major design shift. Using traditional methods, they would have resigned themselves to building multiple prototypes to explore dynamic behavior and root out any compliance issues. Instead, they turned to model-based design. With virtual prototyping, they were able to analyze vibrations and ensure that if driven by a belt drive, for example, the fill head would still be able to dispense fluid into the container they wanted - and not vibrate so much that it would overshoot and filled the adjacent vial by mistake.

Virtual prototyping doesn't completely eliminate the need to build physical prototypes but it dramatically reduces the number required to get to a final version. More important, it helps OEMs avoid design mistakes that add cost and wreak havoc with schedule. "Making a wrong design decision and not realizing it until the final validation tests of your machine? It's probably not quantifiable how expensive that is," says Fritz. "If you have to redesign in the very late stage of your development process, the amount of money can be really significant.”

Once the rough design and control structure is in place, the next step is to specify the motors and drives for each axis. The simulation software has gotten good enough that it can model the interaction of multiple axes simultaneously, which is useful for the design of robot arms, for example. In the case of packaging machines, very often the axes can be modeled independently. The software starts with the controls profile and determines the amount of torque necessary for that motion. Armed with the torque information, it is simple enough for other software to choose the right motor and drive to supply the required motion.

That brings us to the part of the machine building process that used to make the engineering staff break out in a cold sweat: testing. Would the prototype that they invested so much time and money in actually operate properly when they flip the switch? Or would something unexpected appear? With mechatronic simulation, the virtual devices undergo testing throughout the process to reveal the effects of dynamic forces. An axis may be quite stable in slow motion, for example, but if it has high inertia mismatch between load and motor, it may be unstable at high speeds. A coupling may prove to be overly compliant. A small-diameter shaft may act as a spring. With mechatronics, designers can discover and determine solutions for these problems.

By simulating multiple coordinated axes, engineering teams can determine whether the mechanical characteristics of the design meet the machine specification. Can the motor and drive run the application in terms of torque and speed? Will that create a stable solution or does it need a different gear ratio or a higher rotor inertia? Simulation can even help determine a good starting point for tuning the gains of the drives and can reveal whether the system needs to leverage observer control to improve performance. “The preliminary tuning optimization of the drives can be obtained from simulation to avoid unnecessary costs of energy, time, and material that would be used to determine these settings with the machine already built,” da Silva adds.

The one downside is that process can be computationally intensive. The National Instruments software, for example, leverages a physics engine to perform the work. During the simulation, the same PC that handles that software might also need to run the physical controller, which could bog things down. Working with a high-speed processor with plenty of RAM and a separate high-speed graphics card for handling the 3-D visualization is essential for proper response.

The benefits of mechatronics are undeniable, and the design community is gradually getting on board. Today, the use of modeling and simulation is common but applying simulation from the start of a project through to the realized machine and day-to-day maintenance is still the province of early adopters. Still, given the benefits of the approach, it's just a matter of time. Craig, for one, predicts big results from the technology. "If you have this modeling environment and you make use of it and everyone participates, then how you select the motor and how you design a system should change dramatically.”