At a time when lean manufacturing has become the mantra of industry, minimizing energy costs has assumed ever greater importance. It’s not just a matter of controlling consumption, however, but of how that consumption is billed by the utility. This is where power factor plays a key role. Power factor is the ratio of real power to apparent power in an electrical system. The lower the power factor, the higher the current draw. Higher current requires thicker wires and a more robust infrastructure in order to minimize power dissipation. Because this increases cost to utiliies, facilities with low power factors get charged a higher rate. Fortunately, techniques exist to correct power factor and harmonics. In this tutorial, we’ll take a closer look at these concepts as they apply to servo motors and drives.

Using these terms, we can define the displacement power factor PFD by:

We can show the relationships among real, apparent and reactive power in vector space in what is commonly called the power triangle (see figure 1): 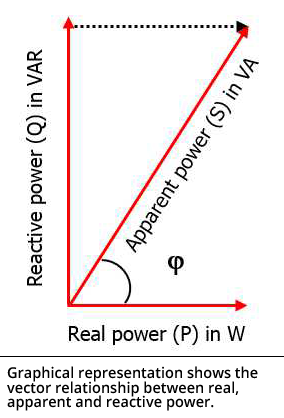 A low displacement power factor indicates a system that is not using power effectively. Using equation 1, we can express real power as:

Decreasing PFD increases P. Of course, P = IV, and for a fixed voltage, current has to rise to compensate for a low displacement power factor. Increased current introduces larger resistive losses, which forces the utility to install oversized wires and transformers to push the same amount of power. This leads to the rate increase we discussed above.

True power factor
Servo drives and variable-frequency drives (VFDs) use diode-bridge rectifiers. Diodes only conduct for the part of the cycle when the input voltage is higher than the DC bus voltage, which introduces harmonics that distort the power signal. At the controller, everything will look fine, with a displacement power factor of around 0.95. The numbers don’t tell the whole story, however. If you measure total current times voltage in the system and calculate true power factor (PFT), it will be low.

The distortion power factor term is introduced by the harmonics. A closer look at the signal will show that the current waveform is no longer a 60-hertz sine wave. The harmonics introduce high-frequency content that converts it into a double-hump pattern (see figure 2).2 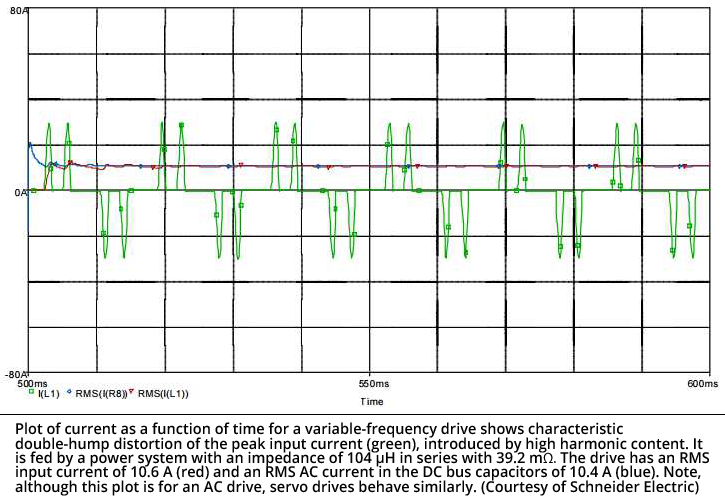 The distortion power factor is given by:

where THD is total current harmonic distortion (for a full derivation, see reference 1).

A servo system typically generates fifth- and seventh-order harmonics at high magnitudes, as well as contributions from higher-frequency terms. (We are ignoring the third-order term in this case because, for a three-phase system, the third-order harmonic at 180 Hz cancels out when it goes through the rectifier.)

Any time a servo axis is moving, it’s generating harmonics and contributing to the problem. Unfortunately, because the load is nonlinear, it cannot be corrected by a linear load in the form of a power-factor correction capacitor. We must look for other solutions. Linking drives on a shared DC bus can mitigate the problem somewhat. If accelerating axes are harvesting current from decelerating axes, they’re not drawing from the mainline.

Another approach to handling harmonics is to add an inductance, like a line reactor or a DC choke. Let’s take a look at the drive from figure 2, now fed by a power system with a much lower impedance. Exposing DC bus capacitors to current spikes can cause a high degree of heating, changing the expected lifetime from years to days (see figure 3). 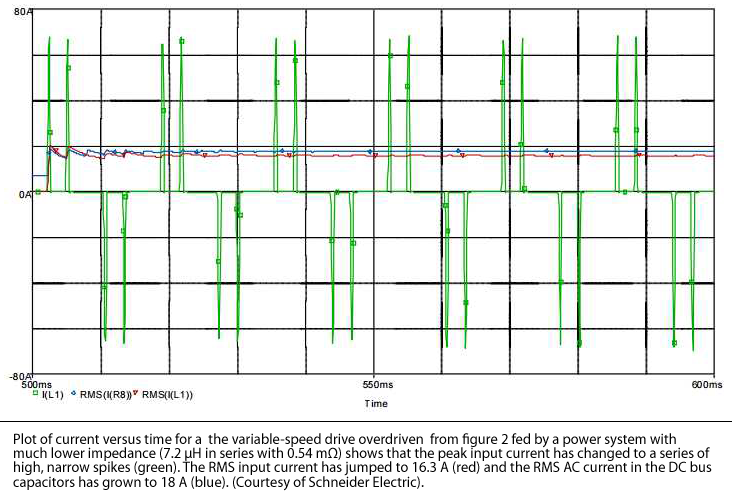 If we add a 3% line reactor, the performance changes (see figure 4). The addition of inductor impedance dwarfs the impedance of the input power system, so the spikes are both lower and broader, like the system driven as rated in figure 2. The line reactor also protects the input diodes from voltage spikes on the line. 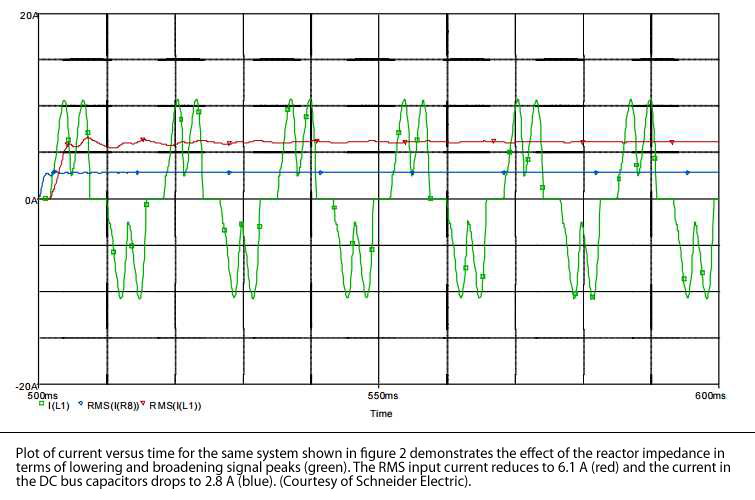 A line reactor is not the only approach. An equivalent DC choke can be used instead to yield a slightly better waveform. Unlike an AC line reactor, the DC choke does not go to zero at the reversal points, which has the effect of smoothing the hump profile (see figure 5). It does not provide as much protection to the input diodes, however. 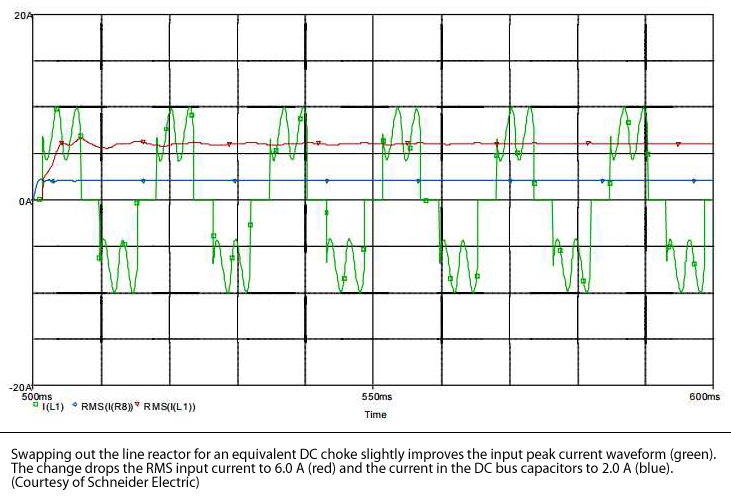 When it comes to running a servo-based system, displacement power factor alone is not a useful assessment of performance. It is essential to analyze and address the effects of harmonics on the system or else you may be faced with unanticipated faults or subpar performance on a regular basis. Ideally, each drive would have either an input line reactor or a DC choke, but this is not typically standard equipment. It will need to be designed in by the panel builder.

Of course, as in all things in engineering, there is no one correct solution. For best results, analyze your system performance and open a dialogue with your vendor to ensure you achieve the performance and reliability that you expect.