To maximize performance and lifetime for your system, choose the right viscosity, thickeners, and additives.

You can spend hours tuning your motors, designing just the right coupling, and programming your PLC. You can develop the perfect machine that delivers exactly the right performance at high speed and low cost, but if you fail to make the right choice of the lubricant, that perfect machine will die an early death. Properly specified and maintained, lubrication is the single most straightforward way for OEMs and end-users alike to ensure top performance and lifetime for a machine. All too often, however, lubrication gets pushed aside for other, seemingly more important tasks. It simple, the thinking goes, and easy to choose. The reality is that the nuances of lubrication can be more complex than they appear. When OEMs and end-users make choices based on past history rather than assessing the conditions of the application and the options available, problems soon follow. In this two-part article, we’ll review the basics, followed by a closer look at common pitfalls and tips for success.

At its most fundamental, lubrication is designed to separate moving parts, decreasing friction to minimize wear and reduce heat generation. Applications for lubrication of motion systems include gearboxes, bearings, and actuators. The 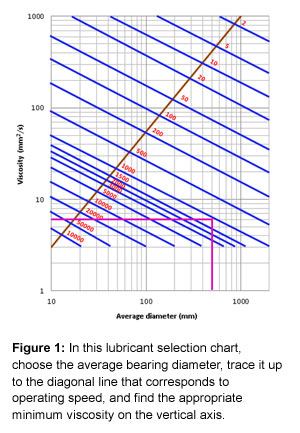 key characteristics to consider when choosing a lubricant include:

, given in units of centistokes. Kinematic viscosity is essentially a measure of a fluid’s resistance to flow. The viscosity of a lubricant imparts film strength—the ability of the lubricant to separate moving parts. Not surprisingly, operating conditions play a key role in determining the appropriate viscosity for a given component and application.

The first step is to determine the minimum operating viscosity. Manufacturers provide parametric data plots for their lubricants that link performance to environmental and operating conditions. A common plot used to select bearing grease, for example, shows viscosity as a function of bearing diameter, with parametric plots of bearing speed (see figure 1). To determine the minimum viscosity, you first choose the average bearing diameter

where D is outer diameter and d is bore diameter. You trace

up to the operating speed of the bearing, and determine your viscosity. Similar tools exist for components like ballscrew actuators.

Of course, designing for the minimum anything is a good way to get substandard performance and lifetime from your system. In general, to optimize lifetime, you want the best possible film thickness between the moving surfaces. We can express practical film thickness using the kappa value where

actual is the actual operating viscosity and

min is the theoretical minimum viscosity. According to studies, a bearing system achieves maximum lifetime with

= 4. That said, engineering always involves trade-offs there and in this situation, there are other factors to consider. Using a kappa value of four introduces other drawbacks such as reduced heat transfer and compromised system efficiency. More typically, industrial and motion systems use

Ultimately, it's a question of choosing the best viscosity for your application. Components in environments with less contamination can tolerate lower kappa values, for example. For some systems, such as bearings operating at very low RPMs, using a lubricant with

=1 may not be possible. A quick glance at figure 1 shows that lubricants and satisfy this criterion probably don't exist for a bearing turning at 5 rpm, for example. Such applications require additional additives 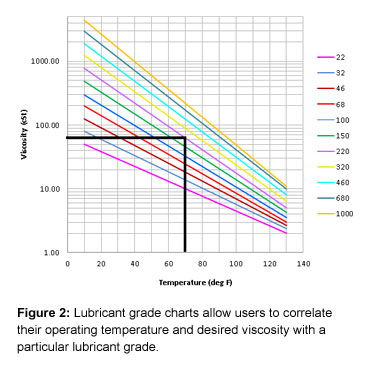 to prevent metal to metal contact and early failure, although for motion control applications, extreme pressure (EP) additives can cause problems themselves, which we will discuss later.

Once you know your minimum viscosity and your

value, you can use a viscosity selection chart to find the right grade of lubricant. Organizations such as ISO or SAE define grades of oil by viscosity at 40°C. The likelihood is that your system will probably operate at a higher or lower temperature. Viscosity charts (see figure 2) allow you to extrapolate performance for your operating temperature in order to determine which grade you need. Here again, trade-offs come into play. If the system has a higher kappa value, then there is a certain amount of flexibility in the specific grade chosen.

Oils versus greases
Even the best base oil can't protect moving parts if it won't remain on the surfaces. At very high speeds or very high temperatures, for example, greases provide a better alternative. Unfortunately, many misconceptions exist about properly specifying grease. A grease is simply a base oil combined with a thickener and possibly additives to create a mixture designed to maintain the protective film between the moving parts. It is important to note that the thickener does not change the viscosity of the base oil in the grease. Rather, it modifies the consistency of the mixture. You can think of the grease as a matrix that holds the oil molecules in place, similar to the way a sponge holds water or flour thickens gravy. Although the proper choice of thickener can be essential to the success of the system, it does not actually affect the ability of the base oil to lubricate. It is the viscosity of the base oil that determines the film strength—the ability of the lubricant to separate moving parts. Adding more thickener just makes a stiffer grease.

Specifying an effective grease starts with choosing the base oil first, as described above, and only then selecting an appropriate thickener and additives. A high-speed bearing, for example, needs a low-viscosity oil to ensure that the moving parts remain separated. At the same time, it needs a high-consistency grease in order to keep the oil on the moving parts. Determine your minimum viscosity and your kappa value first, then think about thickeners.

We characterize bearing speed using speed factor, which can be expressed as:

The choice of speed factor to primarily depends on what your reference materials require, although because NDm involves inner and outer diameter, it takes into account the fact that varies with different pitch diameters have different surface speeds. Speed factor can be used as a criterion for selection of base oil. Bearings with extremely high DN values, for example, might best use a grease with a mineral oil base oil, which can stand up to pressure, whereas synthetic base oils will serve fine for lower speeds.

Thickeners and additives
Consistency describes the overall stiffness of a grease. It is classed by a rating system from the National Lubricating Grease Institute (NLGI), which describes the penetration of a weighted cone dropped into the grease and allowed to settle for 5 seconds. The rating system ranges from 000, which corresponds to a maximum penetration depth of 47.5 mm and is nearly fluid, to 6, which corresponds to a minimum penetration depth of 8.5 mm and is quite stiff. In general, the higher operating temperature range, the higher the NLGI grade you should choose. Similarly, the higher the speed factor, the higher the grade. Typical industrial systems use grade 2, although high-speed bearings in motion systems may use up to grade 3 to ensure that the base oil remains in place.

It's essential to choose a thickener that can tolerate operating conditions. When it comes to motion control, the most important characteristics of a thickener are that it resists oxidation, tolerate high temperatures, resists water, and resists separation from the base oil. Other factors include shear stability, which refers to the ability of a thickener to resist softening (lowering consistency) over time.

The most common thickeners include lithium; complexes of lithium, aluminum, or calcium; calcium sulfonate, polyurea, and clay. These thickeners are all quite stable in terms of oxidation. At high temperatures, however, lithium thickeners perform poorly. When it comes to shear stability, lithium complex and polyurea provide the best resistance to softening. Indeed, polyurea is often the default thickener choice for motion applications. That said, it does not perform well in wet or even humid environments. In a wash-down or high-humidity environment, calcium sulfonate, aluminum complex, calcium complex, or lithium complex might be better choices.

Additives provide methods for fine tuning the performance of a grease or oil. Their properties range from the ability to inhibit rust, corrosion, and oxidation to protection against pressure, demulsifying, and wear. As we mentioned earlier, some applications present such challenging operating conditions that no base oil can deliver an appropriate minimum viscosity level, let alone a higher kappa value. In such cases, extreme pressure (EP) additives can help resist wear. That said, those additives should be avoided if at all possible near electric motors. The compounds used tend to be corrosive to metals such as those used in windings. In general, EP greases lead to early failure in motion systems.

It's important to remember that there are no hard and fast rules when it comes to lubricant selection. For a successful system and extended lifetime, OEMs and end-users alike to consider the different performance parameters and environmental conditions and weigh them against oil and grease characteristics to arrive at the best choice for their particular application.

In part two of this article, we will review how to specify greases and oils with a focus on common pitfalls and best practices.

How IntervalZero RTX Transforms Windows into an RTOS