Motion control involves moving a load to a desired position at a very specific time. Not all motion control tasks are equal, however. Applications requiring multiple axes are more difficult than those involving a single axis. Even within multi-axis motion, some tasks are more challenging than others. Control schemes that involve multiple axes operating independently to position the load are much more simple to execute than those requiring highly synchronized motion. The latter, known as coordinated motion control, requires very fast control loops with high-resolution feedback.

Many automation tasks require motion along multiple axes to position the load without needing coordination among them. A dockside crane, for example, might first translate a container along the X axis to reach its intended position and then lower it until it reaches the deck of the ship. Motion takes place along two axes but serially rather than simultaneously. An automated pill dispenser for a pharmacy that positions a bottle, opens a feeding chute, dispenses medication, and puts the lid on the bottle does not involve coordinated motion control. It may involve centralized control but here, too, motion is played out serially. If it is implemented using distributed control, the master-slave architecture involves the “smarter” axis handing down commands to connected axes.

Even motion along multiple axes simultaneously may not qualify as coordinated motion. An XY positioning stage in a DNA analyzer that moves along orthogonal axes in order to reach a desired sample well may leverage simultaneous motion on both axes but the accuracy of motion along one axis is not used to modify the commands to the second axes. If the reagent dispensing head in that same instrument needs to move along a diagonal pass between sample wells, however, the system is now applying coordinated motion control. 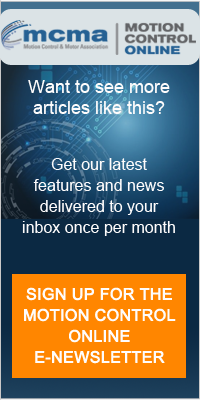 Coordinated motion involves positioning tasks that require one axis to update its movement depending on the performance and feedback of other axes. If the DNA analyzer uses those same two orthogonal actuators to move the dispensing head along a curved trajectory, it is once again applying coordinated motion control. Other examples include 3-D laser printing or multi-axis milling.

From a controls standpoint, coordinated motion control can be quite challenging. “From the supplier side, it can be quite complex because you have a lot of kinematics to deal with,” says Mark Wilder, Application Engineer from Yaskawa. “Instead of axes acting on their own to move to a position, they have to work together. Some axes may be going very fast or making very big moves in a short period of time. You have to know the kinematics of the whole system.”

From the supplier’s standpoint, coordinated motion control presents a challenge. For the end-user and OEM, however, many products exist that make it straightforward. These controllers automate the coordinate transformations and apply frequent updates, axes to ensure the load gets from point A to point B. The firmware prevents any conflicts that can lead to damage or downtime. “From a controls aspect, it's not so simple,” says Wilder. “For the user, it should be that easy?giving two points in space, a start point and an end point, and some kind of command to get there.”