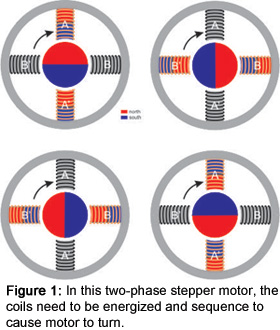 Stepper motors are synchronous brushless DC motors that operate off a pulsed current. , typically without closed-loop feedback. In part I of this tutorial, we discussed the operating mechanism of stepper motors, the different classifications of stepper motors, and various excitation methods.

Stepper motors are available in two basic winding types: unifilar and bifilar. Consider a two-phase motor with four stator poles (see figure 1). In order to cause a pole to act as an electromagnet, which is required in order to generate torque, we energize the windings in sequence. To keep the motor turning, we have to reverse the polarity of that electromagnet by changing the current direction.

Although the windings in the diagram above are depicted as separate, for purposes of manufacturing operation, the coils consist of a continuous wire traveling from one coil to the next, with the winding direction merely reversed in order to achieve the alternating polarity required for motion (see figure 2). Coils can be wound in one of two ways:  unifilar and bifilar. In a unifilar winding configuration, a single wire is used to energize the coils. As a result, the current flows in a single direction at any one time. Reversing motor direction requires reversing the current passing through the wire.

In a bifilar winding configuration, each pole is wound with two wires such that energizing one wire creates an electromagnet with one polarity and energizing the other wire creates an electromagnet with the opposite polarity. The trade-off for this benefit is that it takes a larger amount of wire, which increases size, weight, and cost. In addition, the drive circuitry for a bifilar design can be more complex.

Designers have a number of different winding and wiring options from which to choose. The best choice for a given application involves balancing demands for torque and speed. There are two basic types of stepper motor drives: unipolar or bipolar. With a unipolar drive, the current flows in a single direction whereas with a bipolar drive, current flows in both directions.

Unipolar drives feature a pair of transistors and a center tap on each coil (see figure 2). When the center tap is grounded, the current flows through one half of the winding to establish the desired polarity on the stator pole. The process takes place on one coil after another in order to drive the rotation of the motor in the direction desired. Unipolar drives are typically available with six or eight leads, although the latter is less common. Unipolar drives should be used with bifilar windings—because they can only move current one direction, they cannot reverse a unifilar-wound motor.

As a result of the center tap, a unipolar drive can only energize one half of each coil at any one time, which reduces the output torque of the motor by 41% compared to bipolar designs. Unipolar drives deliver good performance at high speeds. They’re economical and compact, with low current demand, making them a fit for applications like toys and medical devices. On the downside, they deliver 41% less torque than bipolar drives. 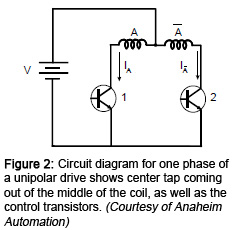 Bipolar basics
Bipolar drives, sometimes called H-bridge drives, allow current to flow both directions through the coil. As a result, they can be used with unifilar motors as well as bifilar motors. Bipolar drives do not use the center tap. Instead, they include two additional transistors per phase to switch the direction of the current through each coil (see figure 3). Bipolar drives energize the entire coil during operation. As a result, they offer very good torque at low speed. They don’t function nearly as well at higher speeds, however.

One of the key advantages to bipolar drives is the degree of flexibility that they offer. Choosing the right wiring scheme will allow you to best serve your application, whether you need muscle at high speeds or a system that will keep its cool.

The three primary wiring configurations for bipolar drives are series, half coil, and parallel. To connect a bipolar drive in series, we wire together the two coils for each phase, e.g., A and  A’, B and B’, etc. The center tap is left unattached (see figure 4). Because the two coils are 180° out of phase electrically, they generate the same polarity, which means that the drive energizes the entire coil for a given phase at any one time. That boosts the holding torque at low speeds.

The downside, however, is that inductance rises by a factor of four, which compromises high-speed performance. It also doubles impedance. For a constant power dissipation, the current rating drops by 29% while voltage rating rises 41% compared to the results for unipolar drive.

If you need better high-speed performance, you may want to consider a bipolar half-coil connection in which one half of the coil is bi-directionally connected while the other half is not connected (see figure 5). The scheme reduces low-speed torque but boosts performance at higher speeds. 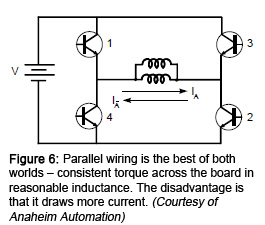 If you’re working with an eight-lead motor, you also have the option of parallel connections (see figure 6). The parallel connection maintains the 41% torque advantage over unipolar drives. At the same time, the approach maintains the effective number of coils, which suppresses the inductance. The result is a motor that delivers solid performance across a wide range of speeds.

In the real world, of course, you never get something for nothing. The trade-off for the performance consistency of a parallel connected bipolar drive is four times the current draw of the series version configuration.

Stepper motors are the workhorses of the motion industry, giving designers numerous degrees of freedom to live up to choose the exact right motion source for their application. By understanding the nuances of the various drive wiring schemes, you can find a stepper motor that support your requirements at a price you like.

Acknowledgments
Thanks go to Craig Ludwick of Anaheim Automation, Dan Jones of Incremotion, and Patrick Dell of MICROMO.

A Perfect Drive Solution in Only a Few Steps