Editor’s Note: This is the first in an ongoing series of motor and motion control tutorials.

Brushed DC motors are the workhorses of industry. They’re simple, rugged, and economical. They offer good speed control at low voltage, and even more important, high torque at low speed. As such, with the addition of closed-loop feedback, they can be a good solution for motion control. Let’s take a closer look at the fundamental theory behind brushed DC motors.

A simple model
Ampere’s Law tells us that a current-carrying wire generates a magnetic field (B-field) whose orientation we can describe with the right-hand rule: When we point our thumb in the direction of the current, our fingers curve in the direction of the magnetic field (see figure 1). If, instead of a single wire loop, we use multiple wire loops in a wire coil, or solenoid, the fields generated by the loops are additive, generating a stronger, more uniform B-field. The lines of this field are roughly parallel to the center axis of the solenoid. This is how we make an electromagnet.

At its most basic, a DC rotary motor consists of a stationary element (the stator) and a rotating element (the rotor). Although a variety of permutations exist—including rotating stators and stationary rotors—for purposes of this article, we’ll talk about a cylindrical internal rotor and an external stator that generates a magnetic field with permanent magnets. We can consider an electric motor as driven by the interaction of the B-field generated by the rotor and the field generated by the stator.

Theory To Practice
How do we convert this concept into an actual machine? Let’s start with a simple example: a two-pole brushed DC motor. It includes a rotor, or armature, and a stator formed of two permanent magnets with opposing poles. The armature consists of a crossbar mounted on a central shaft that is in turn mounted on bearings attached to the motor housing so that it can turn freely (see figure 2). Instead of our single loop of wire described in the sidebar, we wrap the wire around the armature N times to form a coil on each side, but with the direction of winding reversed from one side to another. As a result, when the wire is connected to a power source, the two coils form electromagnets with fields of opposing polarities.

A magnet can be considered as a collection of dipole moments with their orientations aligned. We can use this model as easily with an electromagnet as with a permanent magnet. As we’ve shown in the sidebar, a B-field exerts a force on the dipole moments of our coil to push it into alignment. In other words, when we place the armature in the B-field established by the stator magnets (Bs), the field exerts a force on the coils that applies a torque, causing the armature to rotate around its central axis. 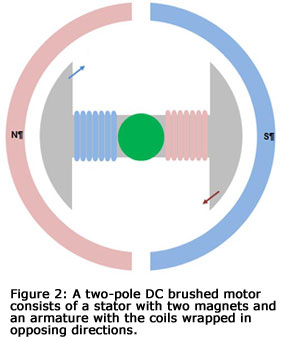 Now, this simple model has some problems. Although the force remains constant so long as the strength of the current and B-field do not change, torque varies as a function of the angle q between the two. As the armature rotates to align the poles of the coils north to south with those of the stator magnets, the value of q and (sinq) drops, eventually driving torque to zero. For practical purposes, that means that the armature stalls when its poles are aligned north to south with those of the stator magnets. ?With sufficient mass, the armature might move the coils might past the point of pure alignment momentarily but then will experience a negative torque, causing it to dither about the point of alignment and eventually stall.

Remember, however, that the orientation of the force applied by the B-field is driven by current direction. This means that reversing the direction of the current will reverse the force and allow the B-field to once again apply torque. If we can switch as the loop reaches the vertical, just after inertia carries it over the top, the  stator field will now act to keep the loop turning, generating torque once again (see figure 2). This is the operating principle of an electric motor. 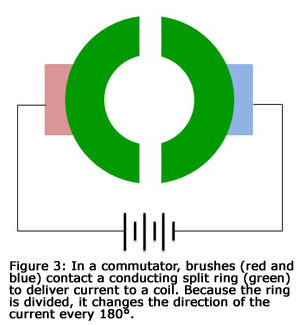 To make this work, we have to find a way to change the direction of the current. In the case of a DC motor, we can do this by adding a commutator to the loop, which switches (commutates) the current. A commutator consists of a split ring mounted on the shaft of the armature such that it moves with the shaft, with one side connected to each coil (see figure 3). To connect the commutator to a power supply, we use brushes. These elements are not actual brushes but pads of conductive material—typically carbon, but often gold or silver, depending on the application—that are typically held against the commutator with leaf springs. As the armature turns, the current reverses every 180° of rotation, keeping the motor turning.

Real-World Motors
The two-pole brushed DC motor is a useful model for understanding the design, and even for specific applications, but in general it is not particularly practical. Depending on the relative width of the brushes, they can create a short circuit as they slide over the gaps between the two sides of the commutator. Widening the gap so that the brushes can’t bridge it could prevent this from happening, but it also squanders power because during those times—indeed, during switchover, in general—the system is essentially consuming power without doing any work. Although inertia allows the motor to keep turning as it passes through the zero-torque point, if the armature were to stop in that position, it would not be able to restart.

Quite aside from the commutator, there are issues with the basic physics at work. The applied torque goes as sin?, which means that it is both nonconstant and nonlinear. Instead of generating constant torque, the motor introduces a periodic ripple (see figure 4). In position-sensitive and velocity-sensitive applications such as those found in motion control, torque ripple can present a significant problem. 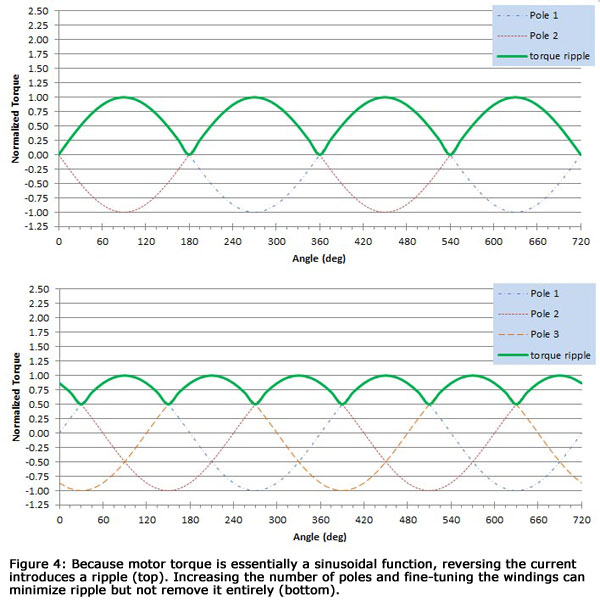 The solution is to abandon the two-pole model for a higher number of poles. In a three-pole motor, for example, all three coils are wound in the same direction and two of the three are energized at any one time. As a result, the motor can start from any position. The system is no longer vulnerable to short circuit from the commutator slip ring, nor is there any time the motor draws current without performing useful work. Just moving from two poles to three poles also significantly reduces the magnitude of torque ripple. By adding poles and modifying the windings, motor designers can fine tune their armature to generate sophisticated magnetic fields that will deliver exactly the torque an application requires.

In the second part of this tutorial series, find out what it is you need to know about brushed DC motors in order to choose the right version for your application and properly integrate it into your system.