There was a time encoders strictly supported position and speed feedback. They provided the data that could be used to monitor the displacement or absolute position of whatever they were attached to - typically the motor shaft - but that was it. The system required the drive or controller to convert encoder output into usable position or speed data. Even when the devices became connected to industrial field buses, they provided only that simple information.

Today, industrial applications require more than just performance. Organizations seek to increase overall equipment effectiveness (OEE), slash downtime, and generally boost profitability. The latest crop of encoders supports that goal by delivering insights about their own condition and the condition of the equipment they monitor. They can act as hubs to aggregate sensor data. They can include built-in functionality that eliminates the need for external components.

"There is clearly a trend to make the encoder a data centralizing point," says Ken Dickinson, senior R&D design engineer at Dynapar (Guernee, Illinois). "Encoder manufactures are rather uniquely positioned to provide product for this. We are specialists in designing and packaging sophisticated sensors and electronics that can survive in harsh industrial environments for service lifetime of no maintenance and yet are relatively easily installed and connected."

Even within the basic function of the encoder, performance has vastly improved. Whether a project requires the highest possible resolution, the smallest size, or robust performance in harsh conditions, modern encoders can meet the challenge.

Encoders 101
Rotary encoders track the rotary motion of a device under test. They can be applied to the motor shaft or to the load. Each encoder includes a code disk (optical encoder engine) or code wheel (magnetic encoder engine) that generates a signal as the disk or wheel turns with the object being tracked. In an optical encoder, the code disk passes between an LED and a photodetector. The disk is patterned with alternating opaque and transparent regions that either block or transmit the beam. Incremental code disks are patterned to generate a pulse stream that can be processed to deliver angular displacement or speed. Absolute code disks are patterned to generate a multi-bit digital word corresponding to the absolute location of the load or shaft at readout time.

Encoders transfer their data to the drive and/or controller. The approach used depends on the technology. Incremental encoders generate analog signals that are digitized, conditioned, and transmitted over wires using one of several purpose-written protocols. The protocols are generally bidirectional and the wires also carry power.

Absolute encoders generate inherently digital output that is transmitted over a digital network. Initially, this took place using common fieldbus protocols such as CANbus, Modbus, and Profibus. With the increasing popularity of industrial Ethernet, encoders are available with built-in Ethernet connectivity such as EtherCAT, Ethernet/IP, and ProfiNET. This connectivity has positioned encoders to play an essential role in the Industrial Internet of Things (IIoT)

Equipment insights
Another characteristic that has enabled encoders to modernize the industrial landscape is the availability of onboard memory and processing power. The traditional model was for the encoder to send the raw output directly to the drive or controller, perhaps after a bit of signal conditioning. Modern encoders have the ability to store and process data, leveraging built-in applications. In some cases, they also have embedded hardware, such as encoders with embedded timers/counters circuits to function as zero-speed switches. 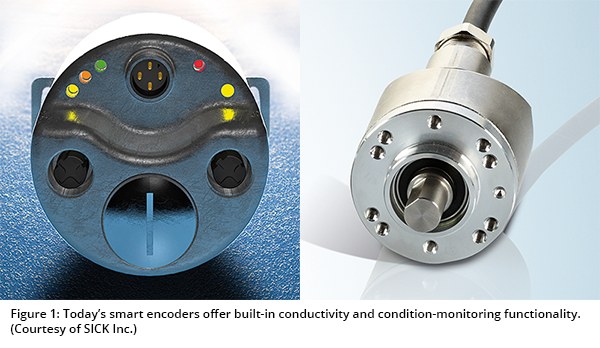 Ethernet-enabled encoders are synced to a real-time clock. As a result, the output that traditionally produces speed and position feedback can be mined to deliver more sophisticated information. An application can detect that an axis has been idle rather than running. It can calculate power-up time versus runtime, the frequency with which the axis changes direction, the amount of time spent traveling in a clockwise versus a counterclockwise direction. It can even quantify the acceleration and deceleration rates. When combined with historical failure data, this information can be used to predict faults and guide predictive maintenance on mechanical components like actuators, bearings, gearboxes, etc. Instead of lurching from failure to failure, maintenance teams can respond to issues before they cause downtime.

Previously, this sort of analysis was available to organizations that had teams of developers to write the applications. Now, encoder manufacturers have begun providing embedded routines that enable OEMs and end-users to harvest this kind of information with a limited engineering investment. Users can take advantage of highly configurable, pre-installed software packages to get to know their systems and operations better than ever. "What we are seeing is that an encoder with built-in functions saves the PLC or controller programmer significant of time," says Jay Johnson, encoder product manager at SICK Inc. (Minneapolis, Minnesota). "This functionality is very valuable to an end user that is interested in predictive maintenance."

Supporting the IIoT
Thus far, we have talked about ways to get more results out of the standard encoder model. Now, we return to the biggest benefit of modern encoders: their ability to act as multimodal sensors. Increasingly, encoders are being fitted with additional sensors such as temperature transducers, voltage meters, and humidistats. These devices can be used to monitor the health of the encoder, providing early warning in advance of failure and enabling predictive maintenance (see figure 2). The data from these sensors also provides insights into the condition of external components, from the axis being monitored to the overall machine. 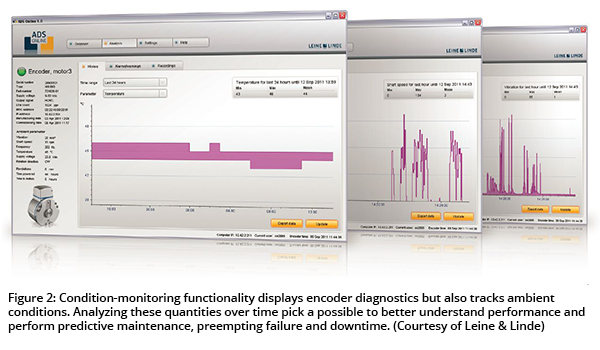 "It has begun with relatively simple information such as voltages, temperatures, and similar," says Dickinson. "Some manufacturers are stepping into vibration and other higher-order sensor information with some data preprocessing capability."

Consider output from the temperature transducer. The encoder can transfer that data to the controller in real time so that it can be analyzed for trends. Alternatively, the encoder can be configured to only send alerts when the data exceeds a preset threshold. If the encoder temperature is rising at a time the ambient conditions are unchanged, it may indicate that the encoder bearing is failing. If the encoder is mounted on the back of the motor, perhaps the motor is the problem and it needs to be checked. The ability to be alerted to this condition before a device goes critical can provide enormous savings in terms of reduced downtime.

Multi-axis accelerometers can be even more useful. Any piece of moving equipment generates a characteristic vibration spectrum. A six-blade fan, for example, will show a spike at the fundamental rotational frequency of the shaft, plus harmonics generated by the individual blades. Any damage to those blades will affect the vibration spectrum in a way that enables it to be traced directly to the cause. These techniques can be used to identify bearing defects, damage to fan blades, and more.

"Fault signatures can be recognized, and what would have been a catastrophic event will turn into scheduled maintenance," says Johnson.

In both examples, the encoder makes it possible to not only monitor the health of the encoder but the equipment on which it is mounted. More insight delivers more informed maintenance and less downtime. This particularly holds for Ethernet-enabled encoders and their ability to support highly networked systems. The data can be passed to supervisory control and data analysis (SCADA) systems and manufacturing execution systems (MESs) for better analytics, process control, and scheduling.

Data aggregation
The traditional analog capabilities of incremental encoders also provide benefits to organizations wanting to leverage the IIoT to enhance productivity. The approach involves a great deal of sensor data, both from within the encoder and from elsewhere on the machine. The challenge is how to capture and route the signals efficiently. Here, encoders can help.

"The main purpose of encoders is to be part of the control loop, the positioning and speed feedback," says Jonathan Dougherty, automation product specialist at Heidenhain Corp. (Schaumburg, Illinois). "Going forward, there are a lot of sensors being added throughout the machine and it's becoming a bit chaotic with the different I/O boards and wiring going to the controller. So what we see is a device that's already a key component to this - the encoder. In future, let's integrate it further to allow it to simplify the networking of these sensors."

The encoder can act as a hub to collect analog signals from external sensors, digitize and condition them, then pass that digital signal to the drives and/or controllers. It provides a simple, easy way to transfer data without adding wiring, which reduces cost, complexity, and points of failure.

The combination of onboard processing power and connectivity has enabled encoders to deliver factory insights that can improve profitability. These devices provide an easy entry point to the IIoT. Industry is currently on the rising side of the adoption curve, but adoption is definitely happening, Johnson says. "It's being used right now and not just by cutting edge large companies but also mainstream system integrators," he says. "You can see it taking off. I think customers in future years are going to implement this more and more."

How Magnetic Sensing Technologies are Changing How You Use Rotary Encoders Webinar, by Posital-Fraba