The Law is the Law: Using Robotics to Comply with FDA Regulations 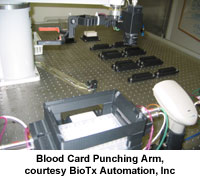 Many industries use robotics to help them comply with a myriad of legal requirements. This runs the gamut of ergonomic requirements to avoid on-the-job injuries and repetitive stress syndrome, to the necessity of having robots perform dangerous jobs involving hazardous or toxic materials.

The pharmaceutical industry relies on robotics to help comply with Food and Drug Administration (FDA) requirements for data collection and good manufacturing practices. While the FDA does not specifically mandate the use of robotics in research and development, manufacturing, or the packaging of pharmaceuticals, most companies in this business deploy them as a means of complying with regulations.

‘‘Because pharmaceuticals are consumed by people, the FDA is a key challenge. Not only do products have to be manufactured under strict guidelines of materials and procedures, companies have to verify they are in compliance,’‘ says Walter Saxe. ‘‘Pharmaceutical companies are regularly audited by the FDA.’‘ Saxe is the Market Research Manager at Applied Robotics, Inc., an end-of-arm tooling provider based in Glenville, New York.

Of the numerous regulations that the FDA requires of the pharmaceutical industry, two are of particular importance, 21 CFR Parts 11 and 211. The former relates to guidelines for trustworthy electronic records. This regulation requires companies to utilize procedures and controls that are to ensure the authenticity, integrity and confidentiality of electronic records. In addition, 21 CFR Part 11 helps certify that an electronic signature is genuine. Part 211 spells out the minimum Current Good Manufacturing Practice (CGMP) for preparation of drug products. This includes aseptic processing, including any robotic equipment. Equipment used for pharmaceutical production must be routinely calibrated, inspected, or checked according to a written program designed to assure proper performance.

‘‘The FDA does not encourage or discourage the use of robotics. 21 CFR says pharmaceutical companies are to establish procedures and follow them,’‘ says David Wyatt, President of Midwest Integration, LLC, of Mishawaka, Indiana. Wyatt continued by saying if a pharmaceutical company sets up procedures to inspect product or processes using a vision system, the FDA expects that company is going to challenge that vision system.

While the regulations do not require the use of robotics, the regulations state that if a company is going to deploy robots as a means of manufacturing pharmaceuticals, there are standards as how they are to be maintained, cleaned, inspected and calibrated. How these standards are met is through a plan drawn up by each company. The role of the FDA is to examine and approve the company’s plan and to ensure that it is being followed faithfully.
‘‘The company’s procedures are reviewed by the FDA to ensure they are sufficient,’‘ Wyatt says.

Wyatt gave an example of a company wanting to install a new robotic system.

‘‘People writing these procedures make them stringent so they are more likely to be approved by the FDA. The automation designer has to follow these procedures, which involves design concepts, design review, peer reviews, and code reviews,’‘ Wyatt says. ‘‘If there is a change, the company has to have a change record, which must be approved,’‘ concluded Wyatt.

There is a danger of going too far in drawing up procedures that are too strict. Wyatt said he knew of some pharmaceutical companies having their hands tied by their own procedures and that they are difficult to implement.

FDA created a uniform approach for the agency to accept electronic signatures and records for all programs areas. Most major control system suppliers are now providing an audit trail and access control functions to meet FDA regulations. The requirement for electronic records is a perfect match with robotics. It is a relatively simple part of work cell integration to have the robot record each step it undertakes so that data could be later tracked down. The data is analyzed should there be a recall of the product by the FDA or to determine if the process could be streamlined.

‘‘We at BioTx routinely utilize data bases to run the robot. The robot works off that data,’‘ says James Frost III, President and CEO of BioTx Automation, Inc. ‘‘With that data, we can capture bar code information, time stamps, and other data.’‘ BioTx is robotics researcher and systems integrator located in Conroe, Texas.

Another facet of 21 CFR Part 11 mandates there be an audit trail when it come to generating data. These audit trails must be secure, computer-generated and time-stamped to independently record the date and time of entries. Any activity that creates, modifies, or deletes electronic records have to be stored and made available should there be a need for the FDA to conduct an audit. Audit trails are required to specify who did what to the records and when this was done. All of this is a cinch for robotics and their controllers.

Most of the data contained in an audit comes in the form of a spreadsheet. Compliant software includes logical security, an audit trail, and the ability to apply electronic signatures. This enables the compliant use of spreadsheets in labs, on manufacturing lines and other areas regulated by 21 CFR. The regulation does not specify the format for audit trials.

A word of caution: Should a software vendor assert they provide a turnkey system that is compliant with Part 11, that claim is most likely false.

Midmac Systems, Inc., an engineering systems and system integrator, specializes in cleanroom operations which includes pharmaceutical production. Michael Perreault, Vice President of St. Paul, Minnesota-based Midmac, points out that robotics fulfills the requirement for both an aseptic environment and for data collection.
‘‘FDA regulations mandate maintaining a sterile environment and for data management,’‘ Perreault said. ‘‘Data management is best done when properly configured sensors on the robot are used to trace product continually throughout the manufacturing process.’‘

‘‘Every phase of pharmaceutical manufacturing has to be documented,’‘ Saxe asserts. ‘‘If there is a problem, such as a recall, companies have to trace the batch.’‘ The elements of data that need to be traceable include the day and hour the pharmaceutical product was made, what state/city it was shipped to, what truck it went in, who it was delivered to, and at what stores. 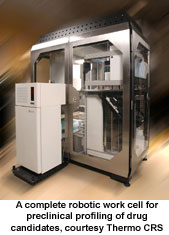 Likewise, Trevor Jones, of Thermo Electron’s division of Thermo CRS says the requirement for data traceability in the pharmaceutical industry is complementary to robotics. Jones is the Director of OEM Development at Thermo CRS, Burlington, Ontario, Canada, a robot manufacturer and system integrator.

‘‘The requirements of 21 CFR Part 11 provides a rigor that removes potential human error. Pharmaceutical companies have to be able to recall reams of data that robotics can provide,’‘ says Jones. The need to follow the requirements of CGMP leads to data integrity.

Jones listed some requirements of data collection and traceability.

‘‘The date the data was collected, the conditions it was collected under, and who collected it are to be included. These requirements are complementary to the use of robotics.’‘ It comes down to the integrity of the data, Jones says. This ensures that the data can be trusted and has not been manipulated.

Jones says that 21 CFR Part 11 has become the de facto world pharmaceutical industry standard. Other countries might have their own rules and regulations for the production of pharmaceuticals, but the pervasive footprint of the United States in the global marketplace has made the US standard the world standard.

Like Walter Saxe and David Wyatt, Jones stresses that the FDA is not spelling out how pharmaceutical production is to be organized. Rather, FDA examines how sound the production system plan is for each pharmaceutical company.

‘‘The FDA looks for the integrity of the system and data. They want to make sure that the automation is used within a quality program,’‘ Jones asserts. ‘‘Robotics makes the system easier to audit, due to the process being performed consistently,’‘ continues Jones. ‘‘Equipment is validated against the process it is running. The robotics would be under close scrutiny.’‘

Robot processes are relatively straightforward to audit. Jones added that for many years, the actions of robots were logged.

‘‘In the pharmaceutical industry, if a robot carries a microtiter plate form one instrument to another, there is a log filed somewhere that says that. That kind of traceability of activity is a key requirement of Part 11,’‘ Jones adds. ‘‘When adding robotics to a system, auditing is easy to do. It is easier to audit than a human.’‘

Keeping it Clean
An important aspect of 21 CFR Part 211 is the requirement for aseptic equipment and operations when manufacturing pharmaceuticals. In work areas where people are directly part of the process, this increases the complexity and cost. Robotics, in part, is used to remove people from the process and to remove the associated costs. Midmac’s Michael Perreault addressed the cost-savings of cleanroom robotics.

‘‘Robotics is used for Class 1 cleanroom operations. If humans are put into the equation, the cost of cleanroom operations goes up a lot,’‘ says Perreault. ‘‘When a person goes in and out of a cleanroom, which they do up to five times a day, it could cost $100 each time.’‘

The cost is the protective suit as well as the time it takes for a technician to put it on and take it off. Each time a person goes in or out of a cleanroom, there is potential for contamination.

When it comes to pharmaceutical, production, people are not as efficient as robotics, especially when wearing a protective suit. Also, the area needs to be larger for a person in a protective suit and it is more difficult to get around in. There is a trend towards smaller robots to decrease their footprint within pharmaceutical work cells.

Pharmaceutical Work
The applications that pharmaceutical robotics are used for range from transferring tiny amounts of liquids used in drug screening to the handling of roller bottles. 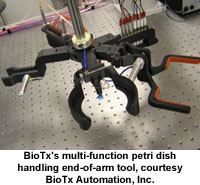 Roller bottles have biological materials mixed together where scientists analyze reactions. To get the materials to  commingle rather than settling is an important task but is one that is time-consuming. This is one task that robotics are especially suited for. Work cells that manipulate roller bottles is a niche filled by Midmac.

Another routine task that pharmaceutical work cells are called upon to perform are the transfer of petri dishes. In this application, petri dishes are moved in and out of devices and instruments that execute a process, such as incubation, fermentation or agitation. BioTx offers an end-of-arm tool that can move petri dishes without disturbing the precious biological matter contained within. This system also has pipetting functionality.

BioTx offers a blood-punching device. This micro-sized robot is designed to increase productivity and lower errors in genetic analysis of blood cards. Manual blood card punching is a slow and tedious process. BioTx’s system moves plates in and out of the testing zone, performs the genetic analysis, finally recording the data.

New and Improved
What is coming in the next few years for pharmaceutical robotics? 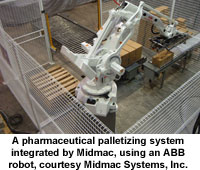 ‘‘I see miniaturization of pharmaceutical robotics as a primary focus because it reduces costs,’‘ predicts James Frost of BioTx. ‘‘In the pharmaceutical industry, there are a lot of expensive compounds. Researchers have to run ten of thousands of tests on these compounds in a short time without running through all the samples.’‘

The smaller you can make your reaction vessel, the more experiments that can be run on a given quantity of assay.

Midmac’s Perreault says that palletizing is an emerging area of growth for robotics in the pharmaceutical sector.

‘‘Robotics can validate the process with continual contact with the product at each stage of production,’‘ Perreault said. This robotic contact ranges from research and development to manufacturing to packaging to palletizing to loading trucks for shipment.