The Bliss of BiSS

Open-source protocol for absolute encoders offers networking benefits. Find out what it can do for you!

Motion control is all about precise positioning and movement. Even if you’ve got the best servos in the world, however, you can’t maintain accurate positioning without a feedback loop. Enter the encoder. An encoder monitors the motion of a system and provides feedback to the controller and driver, allowing them to position with an error defined, in large part, by the resolution of the encoder.

An absolute encoder tracks movement from a physical zero point on the device, so it always knows where home is. Providing the encoder with a virtual home different from the zero point only requires transmission of an electrical signal, not a physical re-homing operation. That does not, perhaps, seem like a great advantage for a single-axis system, but in a motion-control world in which systems routinely feature dozens of axes, the time saved can be significant. “We had a recent application that involved variable package sizes, and the packaging film needed to be tensioned in order to achieve proper film thickness,” says Mark Langille, BiSS product manager for North America, Danaher Inc. (Gurnee, IL). “You can imagine the amount of time it could take to go through a complex machine and reset cams and reset gears as opposed to being able to broadcast a new home point or a new set point to the encoder.”

More meaningful are the advantages of speed and resolution offered by absolute designs. In terms of cost-efficiency, the cut-off for resolution in incremental encoders is around 8192 counts, says Langille. “Upward of 8192, traditional incremental encoders become more like lab instruments than industry-grade sensors.” As the MEMS and nanotechnology markets stand poised on the edge of explosive growth, manufacturers need high resolution, industrial-grade sensors. Absolute encoders provide that capability. 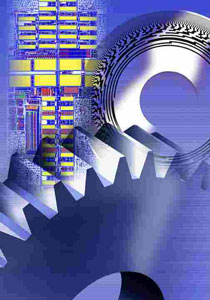 The Protocol of Communications
Of course, a feedback device is only as good as its communication protocol. In the case of encoders, there are several: serial synchronous interface (SSI), the 20-year-old de facto standard; EnDat 2.2, the latest version of the Heidenhain (Traunreut, Germany) proprietary interface; Hiperface, the proprietary interface from SICK/Stegmann GmbH (Donaueschingen, Germany); and the bi-directional serial synchronous interface (BiSS), an open-source protocol working to position itself as the new standard.

SSI is a unidirectional digital protocol only, and thus unable to perform smart sensor communication. Hiperface requires the drives to interpret analog signals from the encoder in order to maintain knowledge of location. “BiSS eliminates all that computation in regard to position and keeps track of it on the encoder,” says Langille. “The other thing that really wasn’t available at the time [SSI was developed] was the ability to do all of that on one piece of silicon, which is how BiSS is designed. All of the computation for interpolation up into 22 bits or even 26 bits occurs on the ASIC in the encoder, whereas before that it was shoved back to the drive. That’s one of the reasons why a BiSS system is more robust than an SSI system.”

The unidirectional nature of SSI means that data can only flow from the position sensor (or any other slave chip) to the master. Bidirectionality also allows the transmission of calibration data and diagnostic information through the network. The fact that BiSS is bidirectional opens up the prospect of “plug and play” systems in which components plugged into a system can send out identifying information and receive back the required operating parameters. A technician could fine-tune a system initially and save the motor parameters to the encoder. When the servo is swapped out, the new drive could query the new encoder and motor to receive all of the information it needs. “All that info can be stored directly by the encoder, thereby making the motor a smart device, as opposed to sort of a big dumb animal that really doesn’t know what to do and how to do it,” Langille says.

Getting On the Bus
Unlike SSI, EnDat 2.2 and Hiperface, which are point-to-point protocols, BiSS is a bus solution. That allows a single master chip to run multiple slave chips with less cabling and a smaller footprint. Of course, we live in the real world, which means there is a tradeoff: the higher the number of devices on the same two-wire bus, the lower the speed. “If you put ten slaves in a daisy chain then of course you will drop the max speed for each single one,” points out Heiner Flocke, co-founder of ASIC-manufacturer iC-Haus GmbH (Bodenheim, Germany), developer of BiSS. “If you want to maintain the maximum speed then you also have to do it in several peer-to-peer connections.”

For the right application, though, say a three-axis system, a single BiSS master could do the job quite nicely. “Maybe you have just one encoder and you need the temperature or anything else from another sensor within the system,” Flocke says. “Then you can easily put it onto one BiSS bus line.”

Which brings up an important point -- BiSS is not just for encoders. The protocol can accommodate any appropriate device, such as a thermister or vibration sensor. And users are already thinking about how to leverage the capability. “People are coming back to us and saying, ‘Can we use BiSS to do additional transmissions?’” notes Langille. “A lot of times, motor manufacturers have a thermister in their motor that requires them to run a separate set of cables back to the drive. Now we’re talking about running that temperature sensor into the encoder and then transmitting that temperature signal back to the motor drive, which reduces the overall installation cost for a motor vendor.”

Opening Up
Ah, cost, the perennial issue. Cost brings us to one of the primary benefits of BiSS -- the fact that it’s an open source protocol. “To create a standard there are in my opinion two choices: one is that you are the monopoly player. The other is that you are like Linux, you give it for free,” says Flocke. “We decided to have an open source interface. The strategy is to have a bigger cake and get a chance to get a bigger piece out of it.”

Accordingly, iC-Haus just sells BiSS chips. BiSS is a low-overhead protocol, in that on the slave side, it requires about 1600 gates, says Flocke, which is only a few percent of a typical 10 mm2 die. Companies wishing to build master chips integrating BiSS can license the technology for free. That means they have free support and free, complete access to the code. “When they build a master chip like an FPGA or a controller with the BiSS microcode on there, then it’s seen as a BiSS device, which helps to establish the standard,” he explains. Vendors developing devices integrating BiSS devices are likewise unaffected, as are users.

For that matter, even IC manufacturers wanting to build BiSS slave chips can license the protocol for free. “There’s a whole list of encoder manufacturers that make BiSS compatible encoders -- not only those who buy their base chip from iC-Haus but other companies who produce their own,” says Langille. Like, for example, Danaher. “You really can’t consider BiSS proprietary because the base code is freely given out to people to research and develop, whereas with EnDat and Hiperface, all of that is done behind closed doors. Other companies are not allowed to adopt those protocols into their encoder.” The benefit comes out of the numbers. “BiSS gives you a much broader range of product and also price and lead time that can’t be matched by just two encoder companies.”

What About the Future?
So what’s waiting up ahead for BiSS? Sophisticated safety applications, for one. A new cost basis, for another, Langille predicts. “The status quo had been for so long that if you wanted to reach this upper echelon of performance, you were going to pay a premium. In that regard, BiSS is really a game changer. I think there’s going to be a major shift in that price point over the next year or two,” he says. That price reduction will put absolute encoders within reach for more applications.

Flocke notes that BiSS continuous mode (c-mode) also incorporates actuators, which significantly broadens its capabilities. “It’s not only a sensor interface with which you can collect data from your sensors, you can also, on the same bus line, give signals to actuators, maybe control data to motors, relays, brakes, or pneumatics.”

As prices come down, he has visions of smart sensor technology moving beyond motion control, even. “One idea was to have a lamp system that illuminates streets. That is a system that contains several sensors like daylight sensors and vibration sensors. It is a little sensor system that could also be done in a bus protocol.”

Given its open-source, bidirectional, digital nature and given that BiSS already has 130 licensees, it seems likely that we’re going to hear a lot more about protocol going forward.

Acknowledgement
Thanks go to Cory Mahn of Danaher for an informative discussion.