| By: Courtesy of AIA Member

The autonomous vehicle—a vehicle capable of driving itself without any human intervention—is quickly becoming a reality. True driverless vehicles are able to "think" like a human driver, and possess the ability to make decisions in real-time, including obeying traffic laws, avoiding obstacles and other vehicles, as well as planning and navigating traffic routes.

The researchers at VisLab, a spin-off company of the University in Parma, Italy that specializes in vehicular applications involving both environmental perception and intelligent control, developed a prototype vehicle called BRAiVE (short for BRAin-drIVE). The off-the-shelf car is equipped with various 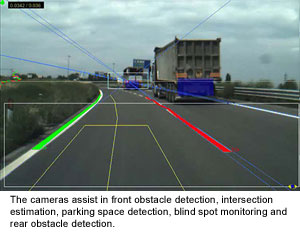 sensing technologies for perception, navigation and control. The perception system is mainly based on vision, together with four laser scanners, sixteen laser beams, GPS, an Inertial Measurement Unit (IMU) and full X-by-wire for autonomous driving. Ten cameras are used to detect information on the surroundings of the vehicle. The images are processed in real-time, together with information from the navigation system, to produce the necessary signals for steering and gas intake.

Four Point Grey Dragonfly2's are mounted behind the upper part of the windshield, two with color sensors and two with mono sensors. These cameras are used for forward obstacle/vehicle detection, lane detection and traffic sign recognition. Two Dragonfly2’s are mounted over the front mudguards, behind the body of the car looking sideways, and are used for parking and traffic intersection detection. An additional two Firefly MV’s are integrated into the rearview mirror to detect overtaking vehicles, and another two Dragonfly2’s monitor nearby obstacles during driving.

Images are acquired from the cameras via external trigger or in free-running mode, depending on the situation, using Format 7 Mode 0 (region of interest mode). The raw Bayer data is color processed on-board the cameras, then streamed at S400 speed over the FireWire interface to the vision system. Stereo algorithms are then used to reconstruct the 3D environment, and provide information about the immediate surroundings.

“We selected Point Grey cameras for a number of reasons, most notably their outstanding image quality, the ability to control parameters such as shutter, gain, and white balance with custom algorithms, and the compatibility with ultra-compact M12 microlens mounts, which have played a key role,” explains Dr. Alberto Broggi, Director of VisLab. Paolo Grisleri, responsible for vehicle integration, adds, “The camera size for integration in the rearview mirrors, availability of third-party software for Linux, as well as good price/performance were other significant factors in our decision.” 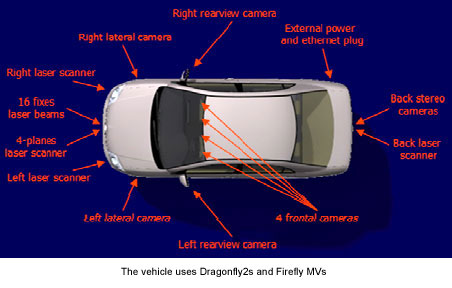 The intelligent capabilities BRAiVE features include crossing assistance, obstacle and pedestrian detection, parking assistance, road sign detection, and lane markings, as well as stop & go and automatic cruise control. All sensors, actuation and control devices are perfectly integrated, giving passengers the feeling of riding in a normal car. BRAiVE was first presented to the press in a public demonstration on April 3rd, 2009 in Parma, Italy and presented at the 2009 IEEE Intelligent Vehicles Symposium in Xi’an, China.

“Artificial vision is a promising technology for cars, trucks, road construction, mining vehicles and indeed military vehicles, thanks to the low cost and great capabilities that vision sensors are currently demonstrating,” adds Paolo Grisleri. He is confident that the technology embedded in this vehicle will constitute the basis for developing innovative concepts for the car industry and full vehicle autonomy in the next few years.