To be considered a servo motor, a motor must be part of a closed loop system, which means it requires position feedback. Two common types of feedback devices are incremental and absolute encoders. Incremental encoders have traditionally held the strongest market share by virtue of speed, simplicity and cost. Now, their market share is shrinking as a result of absolute encoders that offer increasing digital functionality and speed, along with steadily lowering price points. 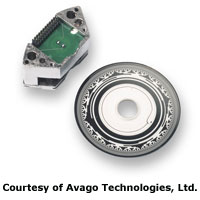 That can be an enormous benefit. Forget about the obvious time-savings in not having to home a 20- or 30-axis machine. In a variety of applications, rehoming is just not feasible, for example in medical testing such as magnetic resonance imaging, or in certain manufacturing processes. On automotive assembly lines, actuators move inside auto frames to make welds. If a power outage takes place, rehoming doesn’t just take time, it presents the risk of damaging the auto body or actuator itself if the unit tries to move in a direction that is now constrained. In these types of applications, absolute encoders are not just a good choice, they’re the only practical choice. 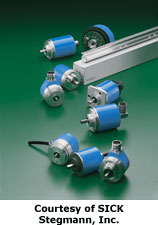 The first absolute encoders were parallel interface, which offered near realtime speed, but at a price. A 12-bit parallel encoder could require as many as 26 conductors, compared to eight for a comparable incremental design. Cabling, of course, is both the most common point of failure for motion control systems and the highest cost, especially as cable lengths grow.

A serial interface absolute encoder requires only four to six wires. The downside is latency -- the drive has to wait for all bits of the digital word to arrive before the data can be processed. Depending on the resolution, delays can be as great as microseconds, simply not acceptable for applications requiring high throughput.

Price Premiums
Even without the parallel interface cabling costs, there is still a price premium for choosing absolute encoders over incremental designs. Depending on which absolute encoder manufacturer you ask, that jump can be as low as 10% or as great as a factor of ten. In part, it’s a question of type of encoder -- rotary absolute encoders are more price competitive than linear designs.

Absolute encoder costs have dropped rapidly in the past few years, driven in large part by volume production and use of automation in manufacturing, says Thomas Wyatt, national sales and product manager of the U.S. division of German encoder manufacturer Heidenhain Corp., a subsidiary of Dr. Johannes Heidenhain GmbH (Schaumberg, Illinois). “We see the costs of rotary encoders coming down significantly. The trend definitely shows that within the next few years you'll see a one-to-one comparison.”

It’s not just a matter of the device type, though. “Sometimes we like to say that if we gave the encoders away, a lot of times it would still be more expensive to implement an absolute system just because there’s not as high a degree of understanding,” says Scott Hewitt, president of SICK/Stegmann Inc., a U.S. subsidiary of Germany sensor manufacturer SICK AG (Dayton, Ohio). That’s an oversimplification, he cautions, but it highlights the learning curve first time users face, not to mention hardware costs. “Think of cost or speed not just in terms of the cost of the encoder but the whole system, including the amount of time it takes you to implement an interface and commission a machine. Everything’s just a little bit more complex with absolute encoders. Just the card that the encoders interface with is more expensive for an absolute encoder than for an incremental encoder.”

Yong Sheng Chew, marketing program manager for absolute encoders at Avago Technologies Ltd. (Penang, Malaysia), agrees. “I think the complexity of integration is a major part of the delay of using absolute encoders,” he says, but maintains that it's a worthwhile tradeoff. “Generally the cost is a bit higher for integrating but the benefits of absolute encoders are far greater than incremental encoders.” 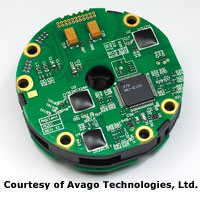 Encoders get smart
Let’s take a closer look at some of those benefits. Because the units incorporate microprocessors, onboard memory and bidirectional communications, they offer capabilities far beyond that of incremental designs.

“Peer-to-peer communications is also driving the demand irrespective of the cost of the encoder from incremental to absolute because incremental encoders can't and never will talk to each other, but absolute encoders do today,” Hewitt says.

The ability to both send and receive information opens up a variety of new functionalities, such as plug-and-play operation. Encoders can be preloaded with a list of parameters at the factory, for example. Once plugged into the system, they can send that information to the controller, so that it knows everything from part number to pulses per rev. By the same token, if an encoder fails, once the replacement unit goes into place, it can download from the controller any system parameters it needs to begin operating immediately.

Absolute encoders can also send diagnostic information. In the case of an optical encoder with an LED that’s beginning to fail, Wyatt says, the device can warn of decreasing LED intensity, ask for more current from the controller to maintain functionality and recommend maintenance within two weeks. 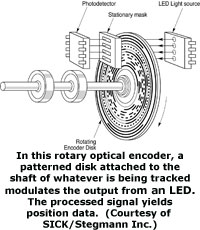 When fitted with temperature or vibration sensors, encoders can not only monitor their own health, they can monitor that of the machine. “The encoder’s a feedback device that’s already on the machine, it's already interfacing with the controls,” says Hewitt. “Why bring several different devices back to the controls? Why not have them right in the encoder, have all the feedback come through the same wires?” Of course, doing that requires speed.

The Need for Speed
Which brings us to the topic of today’s faster absolute encoders. “There are many advantages to speed, one of them being the ability to take care of all three encoder functions within one package,” says Wyatt. “If we look at the three basic applications for an encoder, one is position, two is velocity loop control and three is motor commutation. All three functions can now be taken care of by the encoder downstream to the subsequent electronics. That’s a huge savings for the machine builder, but again, it’s dependent on speed -- you have to be fast enough because if the data is too old, it doesn't do the application any good.”

Part of the speed advances come from smart processor design. Advances in hardware and firmware are speeding up ASIC performance. First, though, you have to get the raw data. “Really it starts with a more effective scanning method,” says Wyatt. “If we look at an old absolute encoder we'll see several binary tracks on a disk. Today, it's really two tracks. One is a pseudo-random code that resembles a bar code and one is an incremental track. By taking these two tracks and processing the signals, we come up with the absolute position information that is then interpolated by a factor of 14 bits. Rather than scanning 13 tracks, we’re scanning two.”

The processing is also accelerated. The raw signal from the encoder, for example, has to be processed and interpolated, and quickly. “It's just a matter of the ASIC design,” Wyatt says. “The interface we have is 16 MHz. The control cycle time for over 100 bits of info is less than 18 μs now.”

That processing muscle allows the encoder to take over tasks that traditionally belong to the controller, such as interpolation. Long cabling between encoder and controller can introduce delays and some degree of signal degradation, even for digital devices. “By the time the signal gets to the controller, it's got some noise on the line which is multiplied. All you're doing is advancing the error rather than getting good clean signals,” says Wyatt. “We decided to take all that and do it on the encoder side. Now, instead of the signal traveling 10 mm it only goes about 2 to 3 mm inside the encoder itself and then it's interpolated and output in pure digital form.” 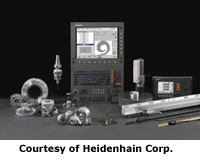 “The most popular feedback choice today remains the resolver,” says Wyatt. “It’s very low cost and very robust. Everybody looks at the advantages of absolute feedback and everybody wants it, but they have to accept that the absolute encoder costs more than a resolver. It's coming closer in price to incremental feedback but when you compare it to resolvers there’s still quite a bit of difference.”

Chew sees it as a question of market sector and price. “Some companies are more prone to incremental encoders and some companies are using absolute encoders,” he says. Asian manufacturers, he notes, use both, depending on the application. As with the United States, the primary barrier to broader acceptance is cost. “If the price doesn’t come down, a lot of industries won’t start moving to absolute encoders,” he says. “Machine builders know what they can get from absolute encoders but the price is too high, and their end customers won’t buy because their end customers treat the system as a black box -- they see what they want to get but they don’t care about the technology inside that can give that.”

Those same end customers have the ability to drive the change, though, Wyatt believes. “End users are beginning to ask for it. Now the machine builders have to take that giant step and make some investment on the interface side,” he says. “[The downside is] having to charge the customer a bit more but the trade-off is a huge advantage from a standpoint of accuracy, sampling, bandwidth and programmability within the encoder. Encoders are becoming more and more smart devices.”

Bringing Robotics and Motion Control Together

How Magnetic Sensing Technologies are Changing How You Use Rotary Encoders Webinar, by Posital-Fraba