Collaborative robots, cobots, or even cobotics… whatever you call this buzzworthy corner of the industry, human-robot collaboration (HRC) is on everyone’s mind. As the robot cages that once kept humans at bay come down and more collaborative cells pop up, safety is top of mind. What better time for North America’s premier conference on robotics safety, the International Robot Safety Conference (IRSC) on October 15-17, 2019 in Indianapolis, Indiana.

In order to fully discuss safety, we’ll need to review one of the most misunderstood aspects of human-robot collaboration: the four methods of collaborative operation. 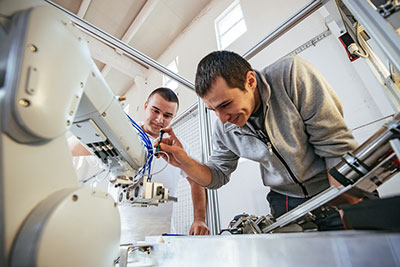 Collaborative robots are gaining in popularity, especially among small and midsized enterprises, and are often the entry point for new robotics users. SMEs welcome the cobots’ ease of use, lower deployment costs, and relatively rapid ROI. According to market research firm MarketsandMarkets™, the collaborative robots market is expected to reach $12.3 billion by 2025.

Sound farfetched? Then consider the fact that a previous forecast published four years ago by ABI Research had cobot production exceeding $1 billion by 2020. If the market keeps growing at the projected 50 percent CAGR, cobots will surpass that mark.

What these optimistic stats don’t account for are the many collaborative applications that incorporate traditional industrial robots. What most people think of when using the term "collaborative robot" is actually a "power and force limited," or PFL, robot. But PFL is only one type of collaborative operation. There’s more than one way to achieve human-robot collaboration. Fenceless safety comes in many forms and form factors. Both cobots (PFL robots) and conventional higher-speed, higher-payload robots can join the action.

The collaborative workspace is the shared space within the operating area where the robot system, including the workpiece, and a human operator can perform tasks concurrently during production. 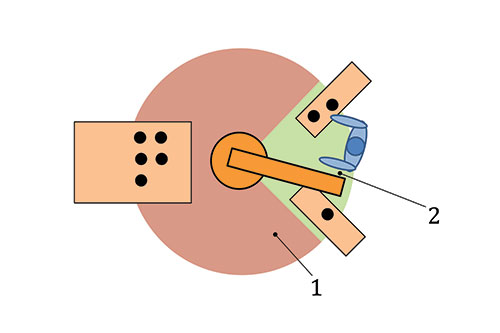 Diagram of a human-robot collaborative operation, where 1 represents the operating space and 2 the collaborative workspace. (Source ISO/TS 15066)

Safety requirements for the collaborative use of industrial robots starts with the ISO 10218-1,2:2011 standard, and in the U.S., its harmonized equivalent ANSI/RIA R15.06-2012, which permit the use of collaborative operations but does not describe them in detail. The ISO/TS 15066:2016 (U.S. harmonized edition: RIA TR R15.606-2016) is a supplemental standard intended for use with the 10218/R15.06, and this is the document describing the four types of collaborative operation. Each method can exist alone or they can be used in combination.

The robot system is typically equipped with safety-rated devices, such as safety area scanners, light curtains, or pressure mats, which detect the presence of an operator or other hazards within the collaborative workspace. Once the operator is detected, the robot system is brought to a protective stop. The system then monitors the human presence and detects when the operator leaves the collaborative workspace, after which the system can resume automatic operation at full process speed. This type of scenario allows traditional high-speed, high-payload robots to operate unhindered most of the time, but provides for some human-robot collaboration when needed, such as for manual part loading/unloading or inspection.

In the hand-guiding method of collaborative operation, a human operator uses a hand-guided device to directly control the motion of the robot while it’s in automatic mode. While in automatic mode, the robot responds only to the operator’s direct control input. Hand guiding is often used as an intelligent lift-assist device to support the weight of heavy or bulky, unwieldy loads while an operator moves them into position for assembly, inspection or other production processes.

Watch hand guiding in action. Heavy loads are no match for this hand-guided titan.

A common misconception with the hand-guiding method is that it is used for teaching, or lead-through teach programming. Although they look similar on the surface, hand-guided teaching and hand-guiding as a method of collaborative operation are not the same. Teaching is not performed while the robot system is in automatic mode.

Before the operator can enter the collaborative workspace, the robot must first perform a safety-rated monitored stop. Only then can the operator manually actuate the hand-guiding device through some type of enabling switch to manipulate the robot in automatic mode.

When the robot is a power and force limiting robot, the hand-guiding method does not require a separate hand-guided device. The cobot can be manipulated directly as seen here. Innovative technologies such as these open the door to more human-robot augmentation and collaboration.

Unlike the safety-rated monitored stop method, a set-up with speed and separation monitoring allows the human operator and robot system to move concurrently in the collaborative workspace. The risks are mitigated by making sure a pre-determined protective separation distance between the operator and the robot system is maintained at all times.

The protective separation distance is the shortest permissible distance between any human and any moving hazardous part of the robot system in the collaborative workspace. A safety-rated laser area scanner is typically used to monitor human movement within the workcell. As the operator approaches the protective separation distance, the robot system will slow down and eventually stop altogether, indicating a human worker is too close to the robot.

When the operator moves away from the robot, the system can resume motion automatically while maintaining the protective separation distance as shown in this demonstration.

In theory, as the safety standard allows, the system can automatically resume motion at full process speed, but in practice, in some systems we see a manual reset.

Fenceless safety does not necessarily equate to a workcell devoid of fences entirely. Many workcells require hard guarding to contain other areas of the robot’s operating space and protect workers from risks not related to the robot system, such as sparks, flying debris, and other process-related potential hazards. In other cases, the process may need to be protected from humans, especially when hygiene is a concern or where throughput goals require uninterrupted, full-speed processing.

Power and force limited (PFL) collaboration requires robots specifically designed for this type of operation to be inherently safe, either through built-in safety features or a safety-related control system. Power and force limiting cobots, sometimes called PFLRs, have built-in force sensing technologies to mitigate the risks of impacts with their human coworkers. PFLRs generally carry lower payloads and operate at lower speeds.

Physical contact between the robot system, including the workpiece, and an operator can occur either intentionally or unintentionally. When contact does occur, cobots tend to be lighter weight with rounded edges and minimal pinch points, and some even are equipped with soft skins, all to help minimize injury. The built-in force sensing and collision detection in some of these cobots help minimize contact or the effects of contact.

Often small and compact, many PFLRs are designed to work alongside humans on busy assembly lines. Watch these cobots perform an ultrasonic welding application.

Although cobots are designed to work in close proximity to humans, or in some cases, directly interact with humans, a cobot does not make for an inherently safe system immediately as is. You have to consider the entire robotic application, including the end-of-arm tooling, workpiece, and processes being performed, and any potential hazards they could present. A risk assessment is a must.

An example includes this collaborative robot cell that needed extra safety measures to tend snap fastening machines. A light curtain prevents workers from reaching a hand into the snap machine or parts hopper, and an area scanner makes the robot slow down when a person enters the work envelope. When the person leaves, the robot resumes normal speed.

For power and force limited collaborative operations, risks are mitigated by ensuring that any potential robot system hazards stay below pain threshold limits determined by the risk assessment. ISO/TS 15066 outlines a means to establish threshold limit values in the specification’s annex.

Now that we’ve reviewed the four methods of collaborative operation, it’s clear to see that safety is still paramount to operating robots in a collaborative space successfully.

Attending the International Robot Safety Conference will give you the latest updates on safety. Hosted by the Association for Advancing Automation and the Robotic Industries Association, the annual event draws attendees from around the globe who want to deepen their understanding of the technical specifications related to the latest robot safety standards. The -volunteer RIA Standards Committee continues a 30-plus-year tradition of robot safety leadership that began with the drafting of the first robot safety standard published in 1986.

Hot topics on the agenda include the release of two new technical reports that provide guidance on interpreting and adhering to the ANSI/RIA R15.06-2012 robot safety standard. A speaker from Corning will introduce TR 706: User Requirements for Robot System Safety, and safety experts from TUV Rheinland and the National Institutes for Standards and Technology (NIST) will introduce TR 806: Test Methods for Power and Force Limited Collaborative Systems.

An important topic at the upcoming safety conference is the recent release of RIA TR R15.806-2018 Testing Methods for Power & Force Limited Collaborative Applications. The technical report describes test methods and metrics for measuring the pressures and forces associated with contact between robots and humans in industrial collaborative applications. The TR also provides guidance on determining the conditions of the test measurements.

“One of the benefits of combining human and automated processes is increased flexibility and diversity of applications, but this can also increase safety hazards if a collaborative robot system is not designed and tested accurately,” says Carole Franklin, RIA Director of Standards Development. “TR 806 shows how to conduct tests of a power-and-force-limited collaborative robot system to ensure that the pressures and forces exerted do, in fact, remain within the guidelines as stated in TR 606 (ISO/TS 15066).”

The new TR 806 describes two main types of contact that can occur between a human and a robot system in a collaborative operation.

1) Quasi-static contact, often called “clamping,” occurs when the robot system contacts a region of the human body that is constrained or quickly constrained against a fixed object such as a fixture, machine frame, conveyor, building column, fence, railing, or other stationary structures.

These distinctions are important because during a risk assessment, the entire collaborative operation, including end-of-arm tooling and workpiece, should be evaluated and any foreseeable human-robot contact scenarios considered. Refer to this article for more information and hear from one of the authors at this year’s safety conference.

RIA will publish the new TR 706 to provide guidance to end-users of robot systems to enable the safe use of robots in their facilities. TR 706 passed its ballot this summer and is in the final stages of publication.

The Cornerstones of Zimmer Group's Industry 4.0 Success - Be part of the revolution!