Did you ever stop to think about all the safety considerations involved when you adjust a car seat for comfort?  Track Corporation of Grand Haven, Michigan, does.  This manufacturer of mechanisms for the automotive industry conducts its own voluntary weekly testing of the seat adjustment track's structural integrity.  The track is bolted to a fixture, and hydraulic cylinders apply 3,000 lb. of pressure to various points of the track.  This simulates a person belted into a vehicle during a crash (in accordance with Federal Motor Vehicle Safety Standards 207/210). 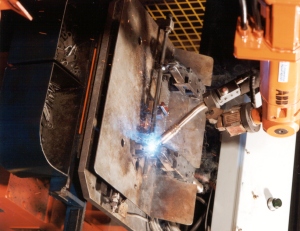 Track is a leader in 'All Belts To Seat' (ABTS) technology, a seat design that directly attaches all seat belt connections to the seat and not the vehicle frame.  Since the seat module takes so much stress during a crash, every part of the seat must be structurally sound.  This includes an unseen and easily forgotten component of the seat, its track.  Track Corp's power seat track incorporates four electric motors and has eight powered seat position adjustments, including recliner movements.

Track decided to vertically integrate their services, reduce costs and gain a tighter control on quality by bringing some welding in-house.  Having outsourced all of their welding, Track wanted to internalize the welding of two ABTS seat track components:  a steel outer rail and a front axle.

The track components were in the load path, so Track knew that weld quality and consistency were essential.  However, since the part volumes were so high (140,000 annually), Track needed to weld a lot of components in a short period of time.  To meet these requirements, Track considered robotic welding.

"Robotic welding gives very consistent welds, and due to the volume of parts we produce, we knew it would be economical to automate," says Terry Plumert, senior process engineer for Track.

Because of Track's volume and high quality needs, AccuBilt recommended the IRB-1400 robot and IRBP 500C positioner from ABB Flexible Automation.  The robotic welding system includes a robot, positioner, process equipment and a variety of options and safety equipment.

"We demonstrated that the cycle times met Track's needs," says Troy Turk, sales engineer for AccuBilt.  "For that kind of high volume welding, the system pays off."

In addition to cycle times, cost efficiency and turn-around time were the deciding factors into Track's purchase of the ABB system from AccuBilt.

"We received the robotic welding system in three weeks," Plumert says.  "Other custom-made cells were quoted at 18 to 22 weeks for delivery.  We had our off-the-shelf system up and welding track components in half the time it would have taken to have another system built for us."

The operator begins by loading the parts to either component onto the fixtures attached to the turntable-the front axle has seven parts and each outer rail has three parts.  After stepping off the safety mat, the operator pushes a button to rotate the table, which stops in front of the robotic arm for welding.  To prevent injury during high-speed rotation, the system stops immediately if the operator steps on the mat when the table is rotating.

While the robot is welding, the operator unloads completed components and reloads parts to begin the process again.  The rail is 3mm thick 80ksi steel and all other parts are 3mm thick mild steel.

Track can weld two outer rails in a 32-second cycle and one front axle in a 26-second cycle.  The system welds at 30 to 70 inches per minute.  Fixture changeover from one component to the other takes about five to ten minutes and occurs twice per week.

"Spatter doesn't contribute to the structure of a weld.  It just gets all over the part and equipment.  With pulsed MIG, we have less spatter and less clean-up," Plumert says.  "Also, pulsed MIG gives us the ability to work with different metals, like aluminum*.  Some components of the seat track are made of aluminum, and we're considering bringing that welding in-house as well.  The Auto Invision is flexible and gives us plenty of capabilities for projects in the future."  To increase and diversify its internal welding capabilities, Track has installed a second ABB system.

* Because aluminum conducts and retains heat so readily, it is much more prone to warping and losing its temper.  The Pulsed MIG process, which is a modified spray transfer process, helps alleviate this problem because it pulses the current between a peak and a background amperage level. The pulsed current has a lower average amperage than spray transfer, which constantly directs heat into the weldment.  On aluminum parts like Track uses, pulsed MIG would provide excellent penetration without overheating.

"The BullsEye is one of the great features of ABB robots," Turk says.  "It's self-calibrating, so the operator doesn't have to make manual adjustments."

"It's a big time saver," Plumert adds.  "If there is ever a quality problem with a weld, the BullsEye checks the center point and the problem is usually eliminated for the next cycle.  It has paid for itself over and over again."

Track chose the T-shaped IRBP- 500C positioner over circular indexing tables because it has a good load rating per side and allows for a variety of parts.  The table's shape gives Track the ability to hang odd-sized parts off the sides of the table without disrupting rotation.

Track added automated features like a bin counter, smart fixtures and a torch cleaning system to its system to reduce operator responsibilities and save on changeover time.

"Except for removing and adding parts, the machine mostly runs itself for sixteen hours a day," says Plumert.  "We designed it to be as quick and easy as possible and to eliminate operator error."

The bin counting feature tells the operator when a standard bin count has been reached by stopping the robot and displaying 'Bin Is Full' on the teach pendant.  Track's smart fixture interface senses the fixture on the turntable to identify what part will be welded and run the appropriate program.  An integrated torch cleaning system automatically cleans out spatter and build-up in the torch while lubricating the nozzle after every 20 welds.

Programming
Offering technical support as an SI (Systems Integrator) for ABB and an ASI (Automated Systems Integrator) for ITW (Illinois Tool Works), AccuBilt gave Plumert and co-worker Roger Hill training in programming the robot.  Although they both had no other previous experience in robotic welders, Plumert says that it was easy to learn.  "Programming the robot was a piece of cake.  We picked up on it right away.  There wasn't any rocket science to it."

Easy Arc, ABB's system program, gives Track the ability to add the features it needs.  "We went with ABB because the Easy Arc program is very flexible and allows us to add bin counters and other efficiency features," Plumert says.  "Our intern, Jason Wisner, programmed the system to include the features we wanted."

Track manufactures the power seat track by incorporating two back-and-forth and four up-and-down (tilt) adjustments onto a recliner assembly provided by Fischer Dynamics.  Then, the entire assembly is supplied to Lear Corporation, the world's largest supplier of automotive interiors.  Lear adds cushions and leather to make a 'seat complete' module, which is then supplied to the automotive manufacturing companies.  The entire seat is hooked onto the car frame and bolted in place and electrical connectors are attached.  This method eases and speeds installation at the vehicle assembly plant.