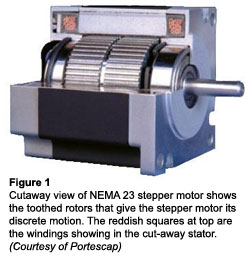 Stepper motors have traditionally been the workhorses of the motion world - not glamorous, perhaps, but effective. Although they can’t achieve the torque or speed levels of servo motors, they have long offered a simpler, more economical solution for a variety of low-tech applications such as printing and medical diagnostics. Now, advances in hardware and software have resulted in stepper motors that are more accurate, intelligent, and powerful than ever before.

A stepper motor features a rotor magnet surrounded by multiple windings (see figure 1). Typically, the motor operates on a step-stage sequence, which is just a series of commands that energize phases at set time increments to move the motor in discrete steps rather than continuously.

Stepper motors generally operate open loop. They do not incorporate feedback but monitor position by keeping track of the number of steps taken from the start position. With fewer components, simpler electronics, and minimal points of failure, stepper motors are easier to install and less expensive than servo motors.

Permanent-magnet stepper motors have another nice capability - they hold their position when the power is removed. “A DC motor is going to rotate very easily with the power off whereas with a stepper motor you can feel the detent," says Bob Martucci, applications engineer MICROMO. “You have to rotate it out of one of those positions in order to get it to move, especially if there’s a gearbox on it.”

Of course, the technology has its limitations, one of them being speed. The torque drops off at high speed in stepper motors because the current switches between phases so quickly that it doesn't have enough time to reach its full value in the coil. Before the motor can reach maximum torque value, the drive is already energizing the next coil.

For high-speed applications, servo motors probably provide a better solution than stepper motors. “In a NEMA 34 motor, a hybrid stepper motor can go up to a couple thousand RPM,” says Dave Beckstoffer, project manager at Portescap. “Once you get past that, then you're going to have to go to a servo motor solution.”

New and Improved
Recent years have seen a number of new trends in stepper motor technology. Perhaps the most important is the dramatic increase in torque density. For many years, the standard in stepper motors was cylindrical, aluminum-nickel-cobalt (AlNiCo) magnets. Today, AlNiCo has been replaced by the more exotic neodymium, which supplies a much higher energy content. The increased field intensity has allowed stepper motors to double record torque density levels. Suddenly, a motor can 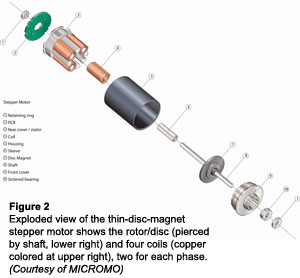 offer much higher output torque in the same form factor. Alternatively, the size of motor required to produce a set amount of torque has dropped dramatically.

Indeed, ever shrinking form factors constitute another stepper motor trend. “Miniaturization is the thing,” says Martucci. “Today, you can get a stepper motor with a diameter of 6 mm and a 6-mm planetary gearbox mounted on it. It opens up new applications. There are some devices that couldn't have used stepper motors before because of size requirements, whereas now they can, like a filter wheel in an analyzer or a shutter drive.”

Changes in magnet form factor have also contributed to this downsizing. The latest design is the disc magnet stepper, in which a thin, disc-shaped magnet replaces the conventional cylindrical magnet (see figure 2). The smaller, lighter magnet reduces inertia, which allows the motor to achieve higher speeds and faster accelerations than standard designs. The tradeoff is increased cost, driven primarily by the unique design of the motor.

Closing the Loop
A stepper motor running open loop is a bit like the good little girl - when it works, it’s great, but when it doesn't, the problems are severe. If the torque of the application exceeds the capabilities of the stepper motor, the motor can lose synchronization and miss steps. Not only does this introduce error but because the unit is operating open loop, there is no way for the system to detect the error or determine exact position of the load in space.

Common causes of torque overload are excess load inertia or vibration. The best way to avoid these problems is to properly size the unit. That means taking a very conservative approach to the motor specifications. “The maximum value of the speed torque constant you can rely on is really only 70% of the published speed-torque curve," says Martucci, "or 50% if you want to be extra safe.”

Conservative sizing is one approach of controlling position error. Using feedback provides another. The rule of thumb used to be that servo motors ran closed loop, while stepper motors ran open loop. These days, for some applications, operating stepper motors closed loop makes sense. Granted, the approach adds cost and complexity, but in some cases it may be worthwhile. “The primary reason you're going to close the loop is in applications where motor failure can be life threatening,” says Beckstoffer. “If you've got a printer application and all of a sudden there is a big paper jam, the fact that the motor 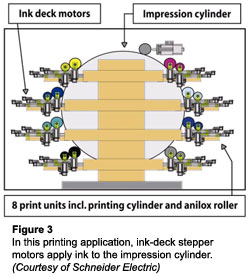 didn't achieve its movement isn’t that much of a problem.”

Even with the additional software and hardware, closed loop stepper motors still offer benefits over servo motors for certain cases. “The electronics are still simpler than for servo motors in general,” Beckstoffer notes. “You're basically just commanding steps and reading the position, you're not monitoring the current in the winding or the commutation that's required on a servo motor.” In addition, a closed-loop stepper motor can potentially fit into a smaller form factor than an equivalent servo motor.

One of the challenges to running a stepper motor closed loop is introduced by the discrete form of the motion. Each time the motor completes a step, it oscillates about its equilibrium position. Depending on the amount of inertia in the system, this ringing can give the appearance of motion to the point that the electronics register an encoder pulse, introducing the very error that the feedback loop was intended to eliminate. Care must be taken in system design and testing to be sure this does not happen.

Monitoring Position
A closed loop system measures the error in its position and acts to correct it. In other words, it is a lagging, or reactive, design. Part of the value of stepper motors in certain applications is that their open loop operation eliminates the time gap between the command and the motion -when the system commands a step, the stepper motor takes a step. One method to preserve that synchronization while minimizing error is to use a feedback device like an encoder to periodically check position and ensure the device is operating within the user-defined window. This typically takes place on the time scale of the motion controller refresh rate - on the order of 10 to 20 ms - rather than on the order of microseconds, as for a servomotor.

The approach improves performance without dramatically increasing cost, says Sam Bandy, product manager for motion at Schneider Electric (Knightdale, North Carolina). "It is not closed loop control, it is monitoring control,” he says. “If you 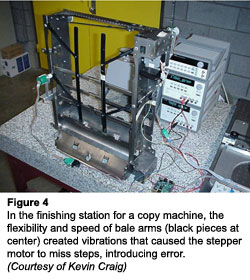 actively close the loop on a stepper you will lose the unique features a stepper has. Applications like printing or leveling cannot have a reactive device, they need to have an in sync device.” (see figure 3)

The current in the windings, for example, can indicate the degree of oscillation about the commanded position. "Without having a sensor on the rotor, you can

monitor what's happening in the un-energized state,” says Kevin Craig, Robert C. Greenheck Chair in Engineering Design at Marquette University (Milwaukee, Wisconsin). “The winding is also moving in a magnetic field, which will cause a current to flow. You can use that information - something that's already inherent in the system - to understand what the system is doing and do a better job of controlling it.”

Combining the data with a detailed model provides the best way to optimize system performance via observer control. If the system includes a microcontroller that is underutilized, and many systems do, the approach will improve performance without adding costs.

The combination of data and modeling can provide innovative solutions to the accuracy problem. “You don't have to energize phases one right after the other with constant time increments, you can energize phases whenever you want," says Craig. "You can even go backward and energize previous phases to add what we call electronic damping to the system.”

Craig’s team worked on a copy machine application in which flexible, fast moving bale arms in the finishing station vibrated enough to cause the stepper motor to miss steps (see figure 4). Instead of looking for a mechanical solution to the problem like stiffening or mechanically damping the arms, Craig's team solved it electronically by energizing a phase in the opposite direction of motion (see figure 5). “You put the brakes on, to slow it as it gets close to its target,” Craig says. “Just energizing the phases in that particular way with a particular current level that will damp the system very inexpensively. It literally took an afternoon to do.”

Intelligence, increased torque density, and new options for accurate performance are making stepper motors the technology of choice for an increasing range of applications. “As stepper motors deliver more power in the same physical dimension, they bring the cost down for those applications that do not need very precise control but do need low speed and high torque operation,” says Bandy. “You can choose a stepper and lower your system cost and reduce set up time.” For high-performance, nothing will beat servo motors. For applications that need to balance cost and ease of use with performance, however, stepper motors provide just the right answer.