Motion Control Opportunities in the chemical industry show up in niche applications or downstream. 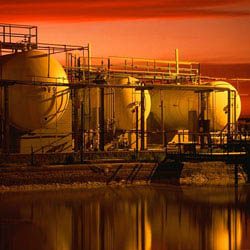 When it comes to motion control, there are the obvious markets -- food and beverage, packaging, manufacturing, semiconductor processing, and so on. Then there are the niche applications in which traditional automation can get the job done adequately, but perhaps motion control can do it better. And in today’s competitive marketplace, companies need every edge they can get.

Consider the chemical industry. Traditionally, the chemical industry is the province of straight automation -- from the motors that run the pumps and agitators to those that keep the mills turning to produce powders. In selected cases, though, motion control can provide a better solution for the task at hand, whether in the processing itself or in downstream operations.

Precision Valve Control
In the case of system integrator Tegron (Longview, Texas), a customer came looking for a better way to extract product from one of their reactors. Motion control provided the answer with pinpoint valve control.

A fluidized bed reactor generates a powder-like substance in the reaction. This product is removed via a pressure-letdown hopper with one valve on the inlet (at the reactor) and one valve on the outlet. When the inlet valve is open, pressure from the reactor pushes the product into the hopper. The inlet valve closes, then the outlet valve opens, releasing the product at a lower pressure.

The piping in the customer’s area was 4-in diameter with 4-in rotary ball valves. In the past, says Tegron application engineer Greg Bayne, the two valves had been driven by a single motor operating at continuous speed. The valves were mechanically coupled and 90 degrees offset from one another -- when one valve was open, in other words, the other was closed. This maintained reactor pressure and ensured that downstream equipment was not over pressured.

“What this customer was looking for was a way to control those two valves independently and maximize, or at least be able to control, the amount of time each valve was fully open,” says Bayne. “They wanted to be able to withdraw as much product as possible but also be safe.”

The solution was to put two independent servo motors on the valves with motion control. “That gave them the capability to accelerate the valve from fully closed to the point at which the valve is just beginning to open to the reactor, then slow down as it’s moving through that open position,” he says. “Once it’s back in a closed position, [the valve] speeds back up to go fully closed.” The same holds for the outlet valve.

The encoder feedback from the servo tracks the exact position of the valves. Rather than traditional servo motors, Tegron used 15 hp AC induction motors. The motors were fitted with AC variable-speed drives made for closed-loop position control with shaft encoders. “The reason we did that is that it was hard to find a servo motor that will work in an explosive environment,” he explains. “It has to be an explosion-proof motor for hazardous duty.”

Bayne spent 14 years in the chemical industry before moving to Tegron, so he brings pan-disciplinary perspective. Overall, he doesn’t characterize the chemical industry as a huge market for motion control, but niche applications like the one above do exist. “Since being exposed to more servo applications, I think back to some possibilities that we might use servos on -- things that are controlled with hydraulics right now,” he says, like positioning in pellet cutters.

For vendors to even consider pursuing this market, however, there is one critical characteristic -- the motors have to be explosion proof.

Moving Downstream
Integrated controls could go a long way toward broadening motion control applications in the chemical processing industry. In integrated controls, a single processor performs multiple tasks. “In process applications, you can use function block programming, while in motion control you use motion instructions,” says Steven Ludwig, programs manager at Rockwell Automation (Mequon, Wisconsin). “You can use different languages in different types of applications, so it feels like a specific control system.”

This multitasking can significantly strengthen the cost-benefit argument. “In traditional chemical applications, there are small components of motion control involved,” Ludwig continues. “Traditionally, they’d have to go get a specific type of control system in order to facilitate that.” Increased cost is never welcome. If, on the other hand, you have a controller that can run both your process application and the motion control element, the whole proposition becomes much more economical; for example, in the valve application above. “There is also the type of applications in which somebody in life sciences might produce a chemical that is then bottled or packaged, and you need high-speed motion on the bottling and packaging machine.”

“When you look back 10 or 20 years, a packaging machine was mainly mechanically controlled,” says Holger Grzonka, industry consultant for the packaging industry at Siemens Energy & Automation Inc. (Norcross, Georgia). “These days you see a lot of servo drives replace those mechanical cams. The machines become more flexible so you can easily deal with different packaging sizes, different packaging styles. You can easily change over from one product to the other.”

Other downstream chemical applications include the chemical fiber industry -- synthetic fabrics, by any other name. Applications range from producing or winding the yarns, a process that requires precision, to opening and closing valves on the bins containing the raw materials for the fibers, says Prasad Thakur, Siemens’ industry consultant for the textile industry.

Motion control will never replace traditional automation in the chemical industry, but in the case of niche applications like these, it still has benefits to offer.