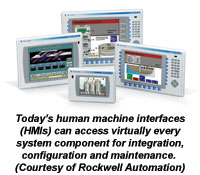 There was a time that the human-machine interface (HMI) commonly consisted of a small LCD that allowed operators to toggle between a few set options. Not any longer. Today, a typical HMI allows engineers to access nearly every element of a machine. State-of-the-art HMIs feature 1600 x 1200 pixel touch screens, Windows interfaces, and enough intelligence and memory to be able to perform basic control tasks. Those additional capabilities present both challenges and opportunities to users, machine builders and system integrators alike.

The fundamental task of the HMI is to provide an interface between the machine and the people running it. Current HMIs are as much a tool for the system integrator and maintenance specialist as they are for the production floor staff. They allow engineers to directly configure components without crawling around to plug into test points and boards.

“When you start talking about the operator interface, it’s almost a misnomer,” says Brian Wall, product manager for visualization software at Rockwell Automation (Milwaukee, Wisconsin). “How the operator interacts with the machine seems to be the simpler part of the problem. The power is shifted over to the system integrator, the maintenance engineer, the guy who comes in the middle of the night to replace a drive that has failed. He needs to plug a new one in and he now needs to configure that drive [through the HMI].”

It’s not just an interface for component replacement, however. It can also let maintenance staff adjust parameters or call up new recipes, for example when a packaging machine switches from a lighter to a heavier paper. “That’s something where they need advanced recipe handling, they want to be able to expose lots of parameters from the controller into the HMI to fine tune set points,” says Wall. “They need to be able to save that back down to the machine but still have the old parameters available for them, so the HMI needs to have the capability of storing large numbers of data sets for these operations.”

“In addition, you can publish secondary screens that can run in any Internet browser,” says Andy Balderson, Product Sales Manager at Parker Hannifin Corp. (Milford, Ohio). “You could have one server box in essence serving up the screens to multiple displays on the machine, or to the desktop of that guy in the front office who just wants production data off the line. It potentially reduces your need for staff because you can now effectively manage what's going on within a cell or an area of the plant without having to be right in front of it, like you would have even four or five years ago.”

HMIs in Control
With added processing muscle, today’s HMIs can do more than just interface with components. In conjunction with smart drives and motors, they can actually perform simple control tasks, eliminating the need for motion controllers in some applications. It’s just another facet of the ongoing trend of intelligent components stretching out into the network to integrate the tasks of other components.

There are, of course, challenges. “It assumes that when I want to move to point B or point A, that process is actually going to be dealt with in the HMI, which means a lot more programming effort needs to be made on the HMI,” says Brian Powell, vice president of sales and operations at Precise Automation (Morgan Hill, California).

It’s a variant on the distributed control approach, which works well for simple applications but tends to be less effective when dealing with tightly coupled loads, such as multi-axis robot arms. For the right application, though, it’s a good fit. “An HMI and these low-cost drives make a very inexpensive solution [for the right application],” Powell says. “You're not going to do anything in a coordinated way, you’re not going to probably do a high-speed application, but you can do a fairly simple application at a very low cost because you don't need a whole bunch of expensive drives and motion controllers. You can get rid of those and put a fairly smart, simple drive on the motor and just talk to your HMI.”

“There are some nice solutions out in the marketplace,” agrees Balderson. “There seem to be some people moving a step further, though, looking toward bringing control inside the HMI box.” Past a certain point, he suggests, widening the mandate of the HMI doesn’t necessarily make sense. “We went down that road with discrete control in PLCs in terms of soft control a few years ago,” he says. “Everyone was excited about taking control inside the HMI and doing soft-PLC-type control, but it never really took off. My gut feeling is that a similar process will happen here with the HMI taking on motion control.”

Part of the problem lies in the inherent fragility of HMIs. By their nature, they need to be exposed for user access, but that exposure makes them vulnerable to damage, whether it’s getting knocked by a lift truck or intentionally disabled. “You can have a display go out and if you have the core control components left inside the controller, whether that be a PLC or a motion controller, you're still functioning,” says Balderson. “If you mesh it together with the HMI, now you've got a certain downtime that maybe you wouldn't have had with a two-piece architecture.”

PC or HMI?
Even as HMIs are encroaching on the territory of motion controllers, PCs are beginning to encroach on the territory of the HMI. Indeed, given the level of processing power and memory in most HMIs, they’re practically simple PCs, anyway. That said, they’re fitted with a dedicated application, whereas a PC is not. “In most cases, people are better off focusing on their core competency of machine function than trying to also become software vendors and write HMI software,” says Balderson. “But certainly I think PCs are going to be taking an increasing role in HMI applications, and by that I mean hardened industrial computing for the industrial environment.”

It’s not a solution for all applications, but if a machine includes a vision system, for example, or if the designers want to be able to program directly from the interface, a PC may offer the best solution. That said, the approach is not without its issues.

Quite aside from software development challenges, one of the issues with using a PC for an interface is that it typically brings the IT department into the picture. Unlike a dedicated HMI, a PC can have other software loaded onto it, or easily cross the firewall. “The core advantage of a dedicated HMI is that it can’t be hacked,” says Nin Sandhu, product manager for visualization products at Rockwell Automation. “With a full-fledged PC, you have the flexibility of installing any software product on there but you still have that little bit of fear that if somebody ever got control of that from the outside world, what could they do?”

“With a PC-based HMI, there are additional considerations needed,” says Wall, citing the need for uninterruptible power supplies, orderly shutdown, secured access to the operating system, and expense and reliability of storage media, to name a few. “From a machine builder’s perspective, I want to make sure that I'm not called out in the middle of the night because something has happened to this PC,” he says. “With an embedded platform, I can just pull one out of stock, pop it in, swap in the flash card from the old HMI that contains my HMI program, and it's up and running. What we find is that if an embedded HMI will fit the application, the customer will almost always use it just because of the simplicity from a maintenance and support perspective.”