Scara vs. Cartesian Robots: Selecting the Right Type for Your Applications

With several types of robotic arms on the market, it is important to know the differences among them in order to select the type that best meets your needs. Categories of robots include articulated arm, polar, cylindrical, gantry, cartesian and scara (selective compliance assembly robot arm). Of these, scara and cartesian robots have proven to be the most popular for straightforward applications.

'When choosing a robot, it depends on the shape of your work envelope,' says John Clark, sales manager for Seiko/Epson America. Generally, cartesians have a rectangular work envelope, while a scara's is circular. The analogy that Clark likes to use to explain the motion of a cartesian is taken from an office:  'Move your chair front to back while moving your arm in and out.' There are other differences between them as well as several advantages and disadvantages of each type. 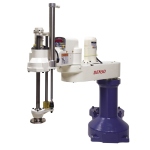 Scara robots have motions similar to that of a human arm. These machines comprise both a 'shoulder' and 'elbow' joint along with a 'wrist' axis and vertical motion. Scara's are ideal for a variety of general-purpose applications requiring fast, repeatable and articulate point to point movements such as palletizing, depalletizing, machine loading/unloading and assembly. Due to their 'elbow' motions, scara robots are also used for applications requiring constant acceleration through circular motions like dispensing and in-place gasket forming. Scara's are cylindrical robots, having two parallel rotary joints and provide compliance in one selected plane.

'Because of their speed, ruggedness, and durability, scara's generally are the first choice of manufacturers,' notes Peter Cavallo, robotics section manager at Denso Robotics of Long Beach, CA. 'Scara's are rigid, but less so than cartesians. All joints are at the end of the arm, resulting in more unsupported mass, which leads to more deflection.' The result, Cavallo says, is that scara robots are less able to cope with unsupported mass and their forces than cartesian systems.

The shoulder and elbow joints on scara's rotate around the vertical axes. The scara configuration provides substantial rigidity for the robot in the vertical direction, but flexibility in the horizontal plane. This makes it ideal for many assembly tasks, such as in the automotive and electronics industries, along with spray-painting and weld sealing applications.

Other applications of scara's can be found in the manufacture of fiber optics. 'In fiber optics, dust can be as large as the part itself. One of our customers had a field of view 0.7 mm by 0.5 mm and the robot was able to pick a part from this area,' says John Clark of Seiko/ Epson.

Scara robot joints are all capable of rotation and can be thoroughly sealed and safeguarded which is necessary should the robot be deployed in dusty or corrosive environments, or for applications under water. 'Scara's are quicker, and can multiply motion at joints,' observed Stephen Harris, president of Rixan Associates, Inc. of Dayton, OH. Harris went on to say that scara's are used by their customers for electronic assembly. 'Scara's are also ideal for hip/knee replacement surgery. For this application, a modified robot bores holes in the femur with a router bit. Usually a surgeon must bore this out by hand, then back-fill any extra,' remarked Steven Glor of Sankyo. The vice president of the Boca Raton, Fl-based Sankyo added, 'With this system, a three dimensional computer model of a patient's hip is made, and a robot uses this as a guide to bore out a precise hole in the bone. A scara is used because it is smaller and more easily transported from one operating room to another. This cannot be done as easily with a cartesian.' Other surgical applications of scara's are to assemble radioactive isotope 'seeds' for treating prostate cancer. The seed is less than 6.5 mm in diameter and the assembly procedure is similar to putting lead into a mechanical pencil.

The disadvantages of scara's are that the work envelope tends to be difficult to control, as well as restricted volume coverage. 'Scara's are tall, so they use a lot of headroom. Because they are headroom-intensive, scara's cannot be used to load press machines or for insertion and retrieval applications,' says Rixan's Stephen Harris.

Precise Cartesians
Cartesian robots have three specified directions X, Y and Z. Coordinate directions are at right angles to each other. The primary advantage of cartesians is that they are capable of moving in multiple linear directions. In addition, cartesians are able to do straight-line insertions into furnaces and are easy to program. Cartesians have the most rigid robotic structure for a given length, since the axes are supported at both ends. Due to their rigid structure these robots can manipulate relatively high loads so they are often used for pick-and-place applications, machine tool loading, and stacking parts into bins. Cartesians can also be used for assembly, where electronics parts insertion is a major growth area, and measuring. Other applications for cartesians include the manufacture of starter motors, wiper motors, instrument clusters, electronic fuel injection systems for cars, as well as cell phones, pressure sensors, printed circuit boards, and navigational systems. Cartesians have also been used in genetic research, or any task that is high volume and repetitive.

'Cartesians are best suited for dispensing adhesives, like in the automotive industry. They have a larger workspace. Sizes range from 100 by 100 mm to 2,000 by 2,000 mm,' remarked Sankyo's Steven Glor. While cartesians have a tighter repeatability over a large work area than scara's, they tend to take up more floor space. 'Cartesians are good for plastic assembly and for injection molding machines,' commented Stephen Harris of Rixan.

The main disadvantage of cartesians is that they require a large volume of space to operate in, though the whole space is not used. 'A cartesian takes up as much space as the X-axis. If, for example, you have a work envelope that requires 600 mm of stroke, the X-axis is going to sit on the table and take up that space,' explains John Clark. Cartesian have the largest surface area requirement of all robotic configurations. Exposed guiding surfaces require covering in corrosive or dusty environments, and cartesians cannot operate under water, as scara's are able to do.

The size of objects able to be managed by robots, particularly scara's, have gotten progressively smaller. 'For the past 20 years, the parts that robots have been able to manipulate have gotten smaller and smaller, from spot welding car bodies down to parts the size of a piece of dust,' says John Clark. With all the differences between scara and cartesian, one would think that the applications for each would be clear. Stephen Harris of Rixan finds that this is not always the case. 'Determining which one to use is often a difficult question. I recently looked at an application where a cartesian, scara, and an articulated arm robot all would have worked. It depends on cost sometimes.'

The world has embraced robots, here’s why the US should too

How to add jobs using robots