Robots are poised to take away a significant portion of the CNC machine tool market.  Emerging technology is making it possible for robot systems to perform many diverse manufacturing processes -- such as complex cutting and material removal, grinding, mold creation, surface finishing, and drilling and tapping applications -- that were previously performed by CNC machines almost exclusively.

CNC machine tools are the workhorses of precision manufacturing.  They represent mature technology, and thousands upon thousands of them are deployed in a wide array of industries and applications.  To support the myriad of CNC machines, a host of mature third-party CAD/CAM packages have evolved that use highly developed, process-specific tools to quickly create complex cutting and material removal paths.  Process-specific expertise about material removal rates, drilling metals and rotation speeds, along with cutting angles and optimized cutting paths, are just a few of the issues that have been solved and encapsulated in these third-party CAD/CAM programs.

CNC programs follow a standard call RS-274D created by the Electronic Industry Association (EIA) in the early 1960s.   This standard is almost universally known as ‘‘G-Codes.’‘  Over its history, the standard has evolved and fragmented.   Depending on the industry, G-codes (motions) and M-codes (functions) used in CNC programs can have different meanings.  Other variations -- such as programs with one or multiple instructions per line, with or without line numbers, and with or without spaces – are also allowed.  From a machine’s perspective, all of this process-specific knowledge built into the CNC programs ultimately produces a path, a speed and the orientation of the tool relative to the part.

Robots use the same kind of information to process a part.  However, each robot manufacturer uses its own proprietary programming language; no industry standard exists.  This lack of standards is the reason that the robot industry has not enjoyed the same kind of third-party CAD/CAM support as the CNC industry.  The robot market was too small and fragmented to provide the kind of return on investment needed to make third-party software development efforts worthwhile.  Additionally, robot manufacturers were not willing to share their proprietary programming language codes with third parties.

To avoid having to ‘‘reinvent the wheel,’‘ robot manufacturers needed a way to tap into the expertise of third-party CAD/CAM packages developed for CNC machine tools.  Software was the answer.  Individual CNC programs often contain tens of thousands of programming points, representing untold man-hours of program development.  However, PC-based software now exists that easily and quickly translates programs written for CNC machine tools, including I/O and other non-motion commands, into robot programs that are ready to run.   This conversion is all done off-line, so production is not interrupted.  While some translators (sometimes called post-processors) are specific to a particular industry and/or CNC process, other software translators have the capability to handle the variations in format and different G- and M-code meanings among diverse industries with only minor changes to the software configuration files.

This CNC machine tool program conversion software allows manufacturers to take advantage of the lower overall equipment cost and increased flexibility that six-axis robots can offer as opposed to more expensive CNC machines with only three- to five-axes of motion.  Six-axis robots can perform many of the same tasks more efficiently, with a faster and cleaner process that provides high throughput rates and virtually unlimited flexibility.  Some applications will still require the extremely high tolerances and accuracies provided by CNC machines, but many do not require quite the same level of precision.   Examples of these types of applications are far-ranging.  Many applications in the plastics industry require trimming, deburring, drilling and routing of molded parts.  Examples include deburring of plastic toys and furniture and the trimming of dental products such as custom dentures and dental alignment inserts.   Water-jet trimming and cutting of automotive carpets and headliners are other processes that are being done by robots programmed like traditional CNCs.  More traditional applications such as robotic trimming, deburring and drilling of aircraft body panels are currently being evaluated.   Today’s robots now have the positioning accuracy, repeatability, and rigidity (mechanical stiffness under load) required to process these slightly less stringent applications. 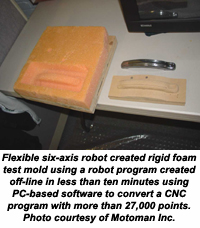 One automotive supplier was able to use PC-based software -- offline -- to convert a CAD/CAM program for the creation of an automotive door handle mold with more than 27,000 points into a robot program in approximately 10 minutes.  As a result, the automotive supplier was able to manufacture the door handle mold with a flexible robotic system that cost less than $150,000 – less than half the price of a $300,000 CNC machine.  In this case, the robot system was fast, cleaner and more flexible than a CNC machine would have been.

For the opportunity to reduce capital equipment expenditures by 50 percent or even more while increasing flexibility over traditional three- and five-axis machine tools, many manufacturers will no doubt make the switch from CNC machine tools to six-axis robots now that software tools have solved the program translation barrier.  Leveraging robot flexibility will provide significant process improvements, including cleaner operations that require less manual intervention, decreased cutting, grinding and sanding times, and a shorter overall manufacturing cycle.