In addition to being an international humanitarian organization, the American Red Cross is the biggest single blood collecting agency in the United States.  Operating as a non-profit organization, the Red Cross supplies blood and blood products to approximately 3,000 hospitals daily.  They now use advanced robotic automation linked directly to a computerized laboratory information system data base to sort tens of thousands of blood samples each day.  Ultimately, this high-tech approach is reducing human error and helping improve productivity and traceability.

Along with every pint bag of blood donated, the Red Cross also collects several blood samples in test tubes.  The bag and all samples are bar-coded for identification and tracking purposes.  Before any blood or component products (such as platelets, red cells, plasma or cryoprecipitate) can be used, samples from each unit must first be centrifuged, blood-typed, and tested for a variety of viral diseases.   This testing is performed at one of five National Testing Laboratories (NTLs) that serve the 36 collection regions encompassing the U.S. and Puerto Rico.  Test results are electronically transferred to the blood centers via laboratory information systems.

One test tube containing a sample from each collection is also sent to the newly formed Red Cross Plasma Sample Management Facility located in Birmingham, Alabama.  There, the bar-coded samples are centrifuged, frozen and stored for a specified number of days.  In the meantime, the NTLs perform whole blood and blood component testing.  Test results from the NTLs are also matched with samples at the plasma facility using a laboratory information system data base.   Using these test results and other information, the tubes are then sorted into categories for processing.  The intended customer receives acceptable test tubes, performs additional testing, and ultimately uses acceptable product to manufacture blood-derived products.

Before the Red Cross had the robots, various people at each of the five NTLs would spend part of their day sorting the tubes manually.  This involved scanning the tubes into the system by passing each tube in front of a stationary bar code scanner.  Audio and visual signals indicated whether the sample was good or bad.  An operator interface indicated the proper sort category for each tube.

When the Red Cross consolidated this activity (from the five NTLs) into one site, it became obvious that this sorting process needed to be automated.

The Plasma Sample Management Facility needed a system capable of sorting up to 30,000 specimen tubes a day.  The goal was to reduce manual handling of potentially hazardous biological specimens and also reduce direct labor hours dedicated to specimen sorting.  Additionally, they wanted to improve traceability and eliminate sorting errors.

The challenge was to find an automated solution with the capability to accurately sort tubes according to barcode labels, based on a direct link with laboratory information system data bases.  Currently, the required sortation throughput rate is 2,700 tubes per hour (900 per system).   The plasma facility wanted the capability to sort tubes to multiple targets and cells that could operate continuously without interruption for tray and rack loading and unloading.   Additionally, a significant amount of walk-away time was desirable.  Equipment also had to be compact to fit within the facility, where floor space is tight.

For this project, the Red Cross purchased three identical Motoman AutoSorter II work cells, which were also integrated and programmed by Motoman.  Each sorts up to 950 tubes per hour and provides 35 to 45 minutes of walk-away time with no interruption for load/unload.  Cell throughput rate is 50 tubes per hour faster than the requirement, providing excess production capacity for future requirements. 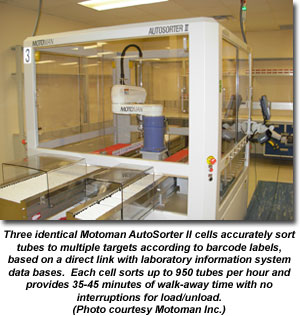 Tubes enter the AutoSorter cells via a tray/rack handling conveyor system that infeeds product in 450-position trays and locates the trays for unloading.  The conveyor system also queues emptied trays and loaded 150-position trays on separate conveyors on the outbound side of the system for pickup.  Each AutoSorter includes five drawers containing a total of eight 5 x 6 target racks (240 possible positions).  An operator can service the target trays without interrupting system operation.

The AutoSorter cells are fully enclosed with clear plastic panels or interlocked moveable doors on all system access points.  Emergency stop and pause controls are accessible from all sides of the equipment.

A PC-based control system is used for cell control.  An integrated data base (Oracle) is used to manage sort information.  The control system communicates directly with the laboratory information system to obtain specimen data, improving traceability and eliminating sorting errors.

On the day that a particular batch is scheduled for processing, 450-count trays of frozen samples are removed from the freezer, placed on large rolling racks, and allowed to thaw.  Tubes are room temperature when they are sorted.  They can be out of the freezer for up to 72 hours, but the sorting is done in a small fraction of that time.

The three AutoSorter cells don’t require a full-time operator.  One operator is assigned to service all three cells, but this person performs other tasks, as well.  The robot cells require very little operator intervention of any sort.

Touch screens and a graphical user interface are used to run the cells.  The software allows multiple sample collection dates to be imported into any number of sorters.  Once these files have been downloaded, the operator just has to load the 450- count trays with samples on one conveyor, put empty 150-count trays on the other, make sure the cell has 30-count racks in place at other targets, and place a biohazard box under the discard target.   The operator then removes trays and replaces them, as needed.   A conveyorized scan automatically checks bar codes on the 150-count trays.  An operator uses a hand-held bar code reader to manually scan 30-count racks prior to loading them into one of the five drawers.

The robot first presents each tube it unloads from the 450-count tray to the stationary bar code reader, which is mounted above a funnel that leads to the discard container.  The robot gripper rotates each tube 360 degrees to ensure a good scan of the label.  Based on bar code read of each individual tube label and direct link with laboratory information system data base, the robot instantly knows what to do with each tube.

Tubes with bar code labels that the system cannot recognize are sorted into 6 x 5 racks in one or more of the robots five drawers. Tubes for which the computer data base has no matching information or tubes that the computer does not identify as being part of the current day’s batch are sorted to a fourth target.

The Factory Acceptance Test for the cells was done in Summer 2006.  The cells were then installed in Birmingham in October.  Following installation qualification, operational qualification, and performance qualification tests, the Red Cross began using the cells in the live environment (to actually process tubes) in mid-February 2007.