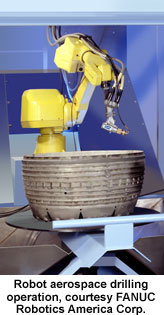 The role of robotics in the manufacture of aerospace products is important although not as pervasive as in the automotive industry. While robotics play an important function in the fabrication of aircraft engines, aerospace companies are increasingly investing in robots to perform drilling, painting and other tasks on airframes. Robot’s ability to repeatedly position very large aerospace components with a high degree of precision ensures that flexible automation has potential market growth.

“Traditional robots that have worked so well in Detroit for the last 30 years do not work well in Everett,” begins Erik Nieves, Technology Director with the Motoman Robotics Division of Yaskawa America Inc. (Miamisburg, Ohio).  “Today’s new robots have become more capable and accurate, bringing them within the performance levels required for aerospace applications”

Drill, Robot, Drill
Drilling holes into components is the largest use of robotics in the aerospace industry. Precision requirements of this application gives end-users an incentive to look at robotics as a means to quickly and consistently undertake this chore. “A fuselage needs thousands of holes drilled and drilling them manually is not feasible,” says Chris Blanchette, National Account Manager with FANUC Robotics America Corp. (Rochester Hills, Michigan). “Vision systems allow the robot to accurately locate where on the airframe that robot will be drilling.” 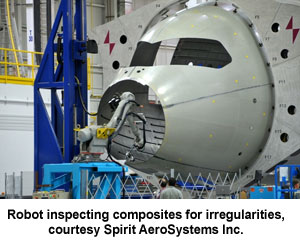 Drilling is not only the most common job robots are called on to do, but has the longest track record within the aerospace industry. “Robots do a wide variety of jobs in the aerospace industry but drilling holes is far and away the number one application robots do. Robots drill, put fasteners into the holes and assemble the parts,” says Curtis Richardson, Associate Technical Fellow at Spirit AeroSystems Inc. (Wichita, Kansas).

Richardson says “Robots fill the middle void between manual labor and hard automation. Spirit AeroSystems’ approach is to use the right tool for the job. Robots drill holes very efficiently, precisely, repeatedly and to a very high degree of quality.” Manual drilling is difficult to do by hand. “Drilling manually takes a tremendous amount of skill and experience to get to the level of quality that a robot can.”

Tooling costs are reduced using robotics for drilling. “Manual drilling requires expensive tooling such as jigs and fixtures. Powerful drilling equipment can be costly and robots are often a good alternative,” says Richardson. 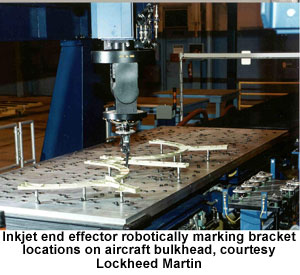 Likewise, “Robots have been used extensively for over 30 years to drill fastener holes. Drilling is the primary application Lockheed Martin uses robots for in our Fort Worth, Texas facility. Drilling fastener holes is an extremely redundant and difficult task, particularly when working on titanium parts,” says David Siedal, a Technical Fellow with Lockheed Martin. “When done manually, drilling requires multiple steps, such as drilling a pilot hole, drill to the final diameter, then reaming it.”

While manual drilling may take up to four operations, robotic drilling can be accomplished in a single pass, says Siedal. “Robots drill the hole to its full diameter and depth, including the countersink, in a single pass. Robots are a huge time-saver in a job impossible for people to do in one pass”

The need for highly repeatable and accurate robots is generally associated with tiny electronic components or assembly  applications. Despite their large size, aerospace products demand similar levels of repeatability, says Nieves. “In automotive spot welding applications, using a teach pendant to drive the robot to its final position is okay because automotive end-users expect to touch up the robot’s path. That process does not work in the aerospace industry,” says Nieves. “That accuracy is achieved by applying secondary encoders.”

Blanchette also speaks of secondary encoding to facilitate robot accuracy and repeatability in aerospace applications. “If the end-user needs more accuracy, integrators put in secondary encoders onto the robot to monitor the true joint position. That allows better control of the robot by minimizing backlash to achieve a higher level of accuracy. Secondary encoders reduce settling time because the robot can react more quickly in drilling applications.”

Obtaining complete coverage on massive airframes with robotics comes through using multiple robots, putting a single robot on a servo-track or deploying a self-propelled mobile robot, Nieves explains. “Installing several fixed robots is not a tenable approach because utilization falls through the floor. The very large parts in aerospace applications would need a dozen fixed robots, but they would not all run at full efficiency."

Nieves turns his attention to the concept of a robot conveyed around airframes on servo tracks to apply paint, remove paint, or drill holes. “Putting robots onto servo-tracks increases utilization but at the cost of flexibility. End-users do not like putting servo tracks on the floor of their manufacturing plant. Manufacturers in the aerospace industry try to keep their floor clean so they can easily reconfigure the production line.” If servo-tracks are installed, the end-user is stuck with rails that must be torn up to reconfigure for a new product line, says Nieves. 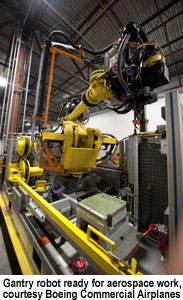 Jerry Fox, Senior Engineer with Boeing Commercial Airplanes (Seattle, Washington), expressed a similar sentiment. “The aerospace industry is trending away from expensive fixed tooling. Modular tools and flexible systems are a growth area, as are mobile robots, that can adapt to different products.” Boeing likes the idea of “re-deployable robots that move from one area to the next on large aircraft while maintaining accuracy.” Boeing uses approximately 90 robots in its worldwide operations.

Applying paint is a hazardous job for people to perform. Using robots to paint airframes  removes people from he hazardous environments associated with painting, Melendez adds.

With large component size, comes high mass, says Robert Rochelle, Food and Packaging Industry Specialist at Stäubli Corp. (Duncan, South Carolina). “We applied a coating material to wing spars. The parts weigh over 9,000 pounds and are over 60 feet long. Handling a part of this size was a unique challenge to traditional robot system designers.” 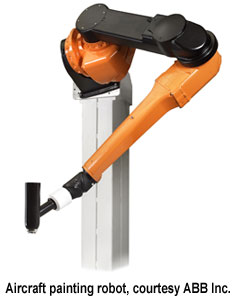 Inspection
While drilling holes and painting constitute the bulk of aerospace applications, robots also perform inspection tasks. “Robots do ultrasonic inspection of airframes. Inspection is becoming more demanding, especially of composite materials and validating that structures in the assemblies are sound,” says Blanchette. “Robots look for cracks or de-lamination of composites and ensure rivets are intact.”

Blanchette says robots have an important role in maintaining aircraft after being in service for some time. “Key components of aircraft must be inspected periodically. Keeping aging aircraft in service for longer times requires recurring inspection. Robots are a key element in enabling companies to cost-effectively perform those tasks.”

Motoman’s Erik Nieves agrees, saying, “Robots automate the inspection process through ultrasonic and other non-destructive methods. Instead of destructive mechanical processes, robots use imaging to evaluate the integrity of composite materials.” Post-production inspection of composites is important says Nieves, as airframe materials change from aluminum to composites.

Tail Winds
Robots are making inroads into the aerospace industry, says Richardson. “Since 2004, the biggest change has been the general attitude towards robotics. Prior to 2004, the attitude of the aerospace industry was very traditional.” The industry’s instinct was to continue using successful production systems of the past. “The industry’s attitude shifted to where robotics is the baseline approach of how we take on new work. Robotics are part of our basic tool set now, a core of how we do business. I see that trend continuing in the next five years.”

Robotics have been added to existing production lines, Richardson adds. “We have a lot of legacy work because aircraft programs last 10 to 30 years. Putting robotics into legacy factories can be challenging due to the constraints of existing facility footprint and factory flow.” Spirit AeroSystems has retrofitted existing aircraft factories successfully, Richardson says.

David Siedal says, “Lockheed Martin builds about four planes per month, but will grow to twelve per month, over the next five years.” Robotics will be an essential component if Lockheed Martin is to triple its monthly output of aircraft by 2018.

Blanchette also sees further robotic penetration into the aerospace market as demand for commercial aircraft continues to rise. “I see a dynamic change in the airframe assembly process where people cannot meet the rates required for future demand. Boeing has to produce up to 45 units per month and talks of going up to 60 units per month.” Meeting that production requirement is impossible without the use of flexible robotics.