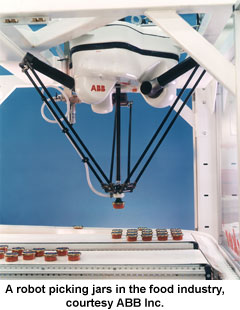 The robotics industry, like the world economy, is slowly emerging from the most trying economic times since the 1930s. The automotive sector, traditionally the core of the robotics industry, is depressed requiring robot manufacturers and integrators to find substitute markets in North America and beyond.

“My outlook for the robotics industry in 2010 is cautiously optimistic and unsettled. Some projects are coming back alive that have been dead a long time,” says Joseph Campbell, Vice President Sales and Marketing of ABB Robotics. (Auburn Hills, Michigan). “Industry analysts are trying to gauge if fourth quarter activity is by companies who have not done any capital investment in 2009 or is it the start of a true recovery.” Orders for new robots declined 30 percent through the third quarter of 2009, with the automotive industry slipping at approximately the same rate. Automotive-related companies typically account for about 60 percent of robots ordered in North America.

“The bottom fell out of the automotive market, which the robotics industry heavily relies on. That fallout has forced the robotics industry to look outside of its comfort zone and move into emerging energy technologies like batteries, wind, and solar power,” says Roger Christian, Vice President of Marketing and International Groups at Motoman Inc. (West Carrollton, Ohio). “Returning to historical levels of selling robots in renewable energy will be slow because these industries at first do not offer the same unit volume that automotive did.”

While the automotive market took a big hit in 2009, some signs of life remain in North America, says Christian. “The Ford Fiesta program in southern Mexico and the Volkswagen program in Chattanooga, Tennessee provided unit volume from these OEM’s and their Tier One suppliers.”

Solar panels could be a saving grace for the robotics industry. “Solar panels will take off in 2010, but it is difficult to say how fast. Manufacturing solar panels requires robotics,” says Åke Lindqvist, a member of the Robotic Industries Association’s (RIA, Ann Arbor, Michigan) board of directors and Vice President of ABB Robotics. “I see smaller fuel cells that can power laptop computers for 40 hours rather than four hours. If fuel cell manufacturers want to produce millions of those per year, they will need robotics.” Lindqvist expects increased opportunities for robotics in fuel cell and solar power during 2010.

Roger Christian adds, “Making solar panels has a demand for robotics such as handling the silicone wafers throughout the slicing, polishing and stringing processes, as well as assembling the panels. Solar is a great growth area for robotics.” A newer type of panels, thin film solar, is a bright spot for robotics too, says Christian. “Companies in Silicon Valley are looking at thin film solar and have launched prototype manufacturing cells that have included robotics. I see thin film solar as an area of growth for robotics.” 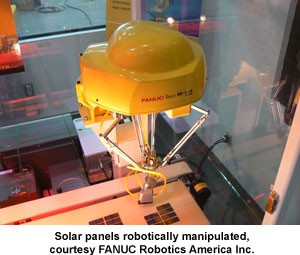 The Stimulus Act passed by Congress in early 2009, a $787 billion package of tax cuts, state aid, and government contracts, has made some impact on the alternative energy market in favor of robotics, remarked Mick Estes, National Distribution Sales Manager at FANUC Robotics America Inc. (Rochester Hills, Michigan). “Stimulus money is getting companies to think about the solar market and other alternative energy areas. We see activity in the battery assembly market.” Money from the Stimulus Act is making its way to automate “green” production such as wind and solar power, says Estes.

The push for wind power is creating an opportunity for robotics in gear manufacturing, says Patrick O'Rahilly. “Gear manufacturing is an important and large industry and one that Compass is pursuing related to making wind turbines.”

Similarly, Christian sees increased possibilities for robotics in putting together wind turbines, especially their gear assemblies. “I see three areas where robotics will play an increasing role in the wind turbine market. One area is deburring or hardening the huge gears in the nacelle. Fabrication of the towers also requires robotics with adaptive welding software to make them.” Christian explains that 200-foot high towers are constructed in 10-foot lengths. Due to their size, turbine towers cannot be transported across oceans but are assembled on-site.

Christian’s third area of robotics for wind turbines is fabrication of the blades. “Manufacturing wind turbine blades is a promising area for robotics, particularly in coating and finishing operations.” 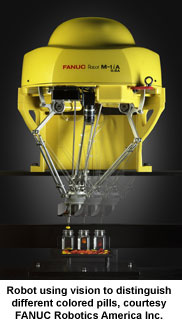 Stuart Shepherd, President of KUKA Robotics Corp. (Clinton Township, Michigan) has a similar take on openings for robotics in the pharmaceutical and life sciences markets in 2010. “Medical device, drug discovery and laboratory applications are experiencing a tremendous amount of growth. We see these industries growing in 2010 as well as a few others.”

ABB’s Campbell agrees, saying, “The food industry is looking to find ways to remove the human touch from food processing and packaging, which is a health and cleanliness issue. The combination of the nature of food processing jobs and the movement of these jobs to locations outside of urban centers makes for increased opportunities for robotics.” Campbell goes on to say, “When a food company comes out with a new food line, they invest in the manufacturing equipment that will go into that new product, such as robotics."

The food and beverage market also offers an area of growth for Motoman, observes Christian. “The food and beverage market will continue to generate a large amount of revenue. In 2010, we predict further growth in this area of about two percent. When food processors started to use robots, they realized that robotics offers a tremendous amount of robustness and flexibility.”

Christian points out that food processors understand the limitations of hard automation. “If a food processor bought dedicated machines for packaging a certain size of potato chip package but need to change that size because the market demands variety packs, that food manufacturer lost flexibility. Food manufacturers are getting excited about robotics, so I think that this market will continue to grow in 2010.”

Going Where the Growth is
While North America and Western Europe are experiencing tough economic times, other places in the world hold out hope for robotics. “China is continuing to grow and they believe it is the end of the world when their gross domestic product growth is below nine percent. China is sitting on a lot of cash and continues to invest in robotics,” says Litt. “Genesis is doing business in China for our North American customers who moved some of their production there. In many cases, the source of robotics in China is North America.”

Opportunities abound in China, says FANUC’s Mick Estes. “China has seen a significant increase in robotics to increase productivity and quality to meet the needs of a growing middle class.”

Christian also sees market possibilities overseas. “China, Brazil, India and Russia, in that order, will be the fastest areas of growth for robotics in the traditional application areas.

Turning his attention to Brazil, Christian says, “Brazil is doing very well: Their recession was shallower and less lengthy than in the US. The Brazilian currency has stabilized, and with the weak dollar, buying automation from the US is popular now.” Christian maintains that Brazil is on the cusp of considerable growth in the next few years. “Brazil is energy-independent, has tremendous agricultural capabilities, and is upgrading their ports. With 190 million people who consume almost three million cars a year, Brazil is poised to really explode in the automotive and durable goods markets.” The robotics industry sees Brazil as a bright area for growth and will take advantage of that in 2010.

Taking a similar track, Roger Christian foresees “lean and flexible” as the robotics industry’s buzz phrase in 2010. “As lot sizes get smaller in a production environment, manufacturers need to be able to manage capital equipment to make a variety of products quickly,” Christian says. “‘Lean and flexible’ is rethinking a typical robot work cell to incorporate moving parts and handing parts once while moving these parts from one process to the next.”

“‘Save your factory’ is a great term and a great presentation but it has not caught on yet,” says Rich Litt. “Genesis and other RIA companies participate in Save your Factory because automating domestically is smarter than moving to countries with low labor costs.”

Mick Estes concurs, saying, “Save your Factory’s message is that the move to low-wage countries might not have been everything manufacturers hoped it would be.”

2010+
While the economy is showing indications of recovery, the robotics industry is not holding its breath. “The outlook in 2010 will be better than 2009 but not near 2007 levels unless the economy gets an unexpected resurgence in consumer confidence and people start buying more durable goods. Also, a glut of 4,000 to 7,000 used robots is on the market due to plant closings,” says Roger Christian. “Robots are built so well that they keep running.” Christian concludes, “I am excited to see the robotics industry returning to a billion dollar industry,” but cautious, “it will take a couple of years to get there.”