It is clear that 2005 will be a red letter date in the history of industrial robotics, even supplanting the unbelievable volume of 1999 as the Best Year Ever. With 2005 growing at a rate of 30 percent, what is in store for the robotics industry in 2006? The consensus is that 2006 will be a growing year for robotics, but not at the dazzling pace of 2005. 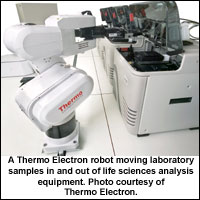 ‘‘I believe that 2006 will be a strong year for the robotics market, but it is difficult to predict that growth will be on a rocket-ship ride as in 2005,’‘ says Trevor Jones. ‘‘All applications are trending up by the look of the latest statistics.’‘ Jones, President of the Robotic Industries Association (RIA), Ann Arbor, Michigan, is also Director of OEM Business Development at Thermo Electron Corporation, Burlington, Ontario, Canada, a robot manufacturer and system integrator specializing in life science applications.

Likewise, Craig Jennings of Motoman Inc. is optimistic for 2006 being a prosperous year for the robotics industry. Jennings is President and Chief Operating Officer at Motoman, West Carrollton, Ohio, as well as a former president of RIA. ‘‘2006 will be a good year for the robotics industry, but the growth will not be as strong as 2005. Data from the first nine months of 2005 shows that the robotics industry was growing extremely rapidly, at a rate of 30 percent,’‘ Jennings says. ‘‘After the incredible year of 2005, 2006 will go down as another record-setting year, but only slightly over 2005.’‘ Jennings believes volume of robots ordered will be stable into next year and experience perhaps a slight increase over 2005’s off-the-charts growth.

Åke Lindqvist, RIA’s Past President, has a similar assessment to that of Jennings and Jones. Lindqvist’s other role is that of Group Vice President, Robotic Products and Automation for North America at ABB, Inc., Auburn Hills, Michigan.

‘‘In 2005 the robotics industry will probably exceed the business level of 1999,’‘ says Lindqvist. ‘‘I see no reason not to think that 2006 will not be a good year, but not at the increasing levels of the past two years.’‘ Lindqvist went on to say that he does not see the rapid expansion of the robotics market continuing at 2005’s level.

Another former RIA president, Kevin Ostby of FANUC Robotics America, Inc., also is cheered by the heady numbers for 2005 and has optimism for 2006. Ostby is Vice President Regional Operations at FANUC, Rochester Hills, Michigan. His comments focus on issues such as the cost of materials and as a means of keeping manufacturing jobs at home instead of sending them offshore. 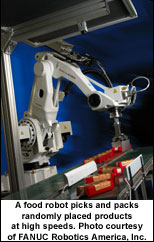 ‘‘I think the robotics market is going to see growth in 2006 because U.S. industry has continued to invest in them. Robotics is key to remaining competitive and staying at home,’‘ Ostby says. ‘‘A lot of the growth in the robotics industry is due to manufacturers that are now thinking about them rather than going offshore,’‘ Ostby points out. ‘‘I think that the increase costs of materials and energy are working together so manufacturers are looking for whatever makes them more competitive. Robotics is one way to dramatically affect a manufacturer’s ability to be competitive, improve quality, and to reduce material use.

Like Lindqvist, Jones, Jennings, and Ostby, RIA’s own Don Vincent is optimistic on the outlook of robotics in the coming year, but his expectations are tempered by a measure of circumspection. Vincent is Executive Vice President of RIA. ‘‘Attendees at the recent Robotics Industry Forum were cautious on their predictions for 2006,’‘ says Vincent. ‘‘Robot manufacturers are anxiously waiting to see what happens in the automotive sector, because automotive is such a big customer in the robotics industry and continues to be dominant,’‘ Vincent cautions.

‘‘In the non-automotive side of the robotics market, we are seeing an explosion of activity,’‘ says Richard Litt, President and CEO of Genesis Systems Group, an arc welding integrator based in Davenport, Iowa. Litt also serves as the First Vice President of the RIA. Litt sees no reason that growth will not continue in the non-automotive sphere, although he feels it is unlikely to remain at the breakneck speed of 2005.

If You Can Justify You Should ‘‘Robofy’‘
As economies globalize and technology changes, some of the reasons manufacturers have for implementing a robotic solution to their production process changes along with them. Trevor Jones explains: ‘‘I see the old arguments against robotics are being thrown aside. Robots have more capability at a lower price, so the capital investment hurdle is dropping,’‘ Jones says. ‘‘North American industry has been trying to find ways to justify staying in North America. The increase in performance of robotics allows industry to do more and to assemble products with higher sophistication, Jones asserts.

Jones argues that because prices of robots are trending down, the opportunities for keeping industry in North America are growing as a result of advanced robotic technologies that are now affordable. ‘‘The average quality of robots is increasing and there is no stress on the supply side of robots,’‘ Jones says. 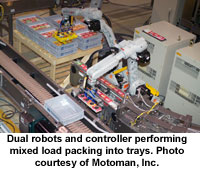 The drop in prices of robots acting as a justification for investing in them by manufactures was also on the mind of Craig Jennings of Motoman. ‘‘Robotics have become relatively inexpensive over alternative costs. The return on investment is becoming less of a challenge,’‘ Jennings maintains. Jennings helps justify investing in robotics to Motoman’s customers by showing them that payback for 80 percent of robotic applications is typically justified in six to 24 months. ROI on even the most complex applications is not more than three-and-a-half years, Jennings added.

Lindqvist uses environmental reasons to help justify an investment in robotics. ‘‘Suppose there is an environmental law that imposes restrictions on how much fumes could be emitted during welding,’‘ Lindqvist proposes. ‘‘That is a parameter to justify welding robots for environmental and health reasons.’‘

Some of the historical justifications for investing in robotics, savings in materials and labor, will continue to be valid in 2006. Kevin Ostby addresses the justification issue.

‘‘FANUC shows customers how robotics save money on labor and materials. I attended a boat industry trade show and found the opportunity to consistently spray fiberglass onto a boat represents a huge potential saving if that process can be automated.’‘

Ostby says he suggested to boat builders that they invest in robotics because robots can apply sprayed-on fiberglass in the same way and in the proper amount every time. ‘‘Over-Spraying wastes materials, under-spraying relates to quality issues,’‘ Ostby contends. Ostby says he explained to boat makers that robots can save them money on materials, put materials on more consistently, and save time by doing things right the first time.

Ostby states that there are a lot of opportunities in other industries where the dynamic of saving time and material justifies investing in robotics. With the recent escalating costs of energy and petroleum-based materials, implementing robotics in 2006 makes more sense than ever before.

Similarly, Don Vincent of RIA supports justification of robotics by stressing increased equipment reliability and productivity gains. For some potential robotic users, increases in the reliability and productivity alone are insufficient for such a capital expenditure. ‘‘End-users are more sophisticated today and need to see a system working before they buy it,’‘ says Vincent.

2006 Trends
The trend towards niche markets and small specialized markets will continue in 2006 and beyond. ‘‘Small business are stepping up to robotics more because they no longer hear the horror stories as they did in the early 1980’s, which scared them away from robotics for fifteen years,’‘ relates Craig Jennings. ‘‘Smaller companies are using robotics for loading and unloading of tools such as press brakes, presses, machine tools and testers. Arc welding and assembly applications have grown for small companies,’‘ Jennings says. 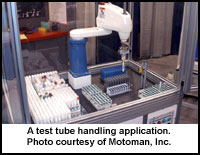 Jennings also commented on how the use of robotics could reverse the trend of production going to countries with low labor costs. Motoman’s President says that the trend towards going offshore to tap into low wage markets has run its course and that it could be wiser to keep production at home. ‘‘Companies are beginning to realize that workers might only cost 50 cents an hour in a country like China, but a robot costs only 30 cents an hour to operate,’‘ Jennings claims. ‘‘If manufacturers amortize the costs of a robot over fifteen years, they can compete with that 50-cent-an hour worker in China staying where they are.’‘

It has been shown that for each manufacturing job, there are four other jobs created along side of it. Robotics plays a major role in keeping those jobs and vital production at home. ‘‘I think there is a backlash to emigrating jobs to low-wage countries, which is a boon for robotics,’‘ Jennings feels.

Åke Lindqvist’s take on trends for the robotics industry for the coming year is more of the same, especially when booming material-handling applications are taken into consideration. ‘‘There are less transfer lines being used in favor of more robotics for moving parts between robot stations,’‘ observes Lindqvist. ‘‘I see that the number of robots in body shop applications has gone up considerably in the last few years.’‘

Lindqvist predicts this trend will continue into 2006, presenting an example to make his point. ‘‘A couple of years ago, body shops tended to have 300 to 400 robots. Today, a typical body shop has 600 to 700 robots. Conveyer and transfer lines are being replaced by robots.’‘

Lindqvist claims a consequence of the doubling of robots in body shops has led to a market demand that their payload capacity increase. ‘‘The increase in material-handling robots in body shops has driven up the handling capacity requirements on robots,’‘ Lindqvist says. ‘‘These robots can handle 500-600 kg, whereas two years ago, 250 kg was considered to be a lot. Payload and torque have been increasing, to move pieces between work stations.’‘

FANUC has seen a trend towards niche markets within robotics and is pursuing them. Again, Kevin Ostby: ‘‘The medical-device market is a developing niche. Medical applications are outside the normal industrial-robot environment, often using specialized robotics. Universities are driving development of that area.’‘ Ostby also says small business is deploying robotics as a strategy to remain profitable.

‘‘Within the industrial arena, we are seeing more small manufacturers that are willing to put in a robot, even if there are only a few people in the shop,’‘ says Ostby. ‘‘FANUC is seeing a lot more of Mom-and-Pop manufacturers and job shops that are investing in robotics so they can be competitive with the bigger players in their business.’‘ Ostby says that the trend towards specialized niche robotics is driven more to small-sized enterprises rather than the industry these small businesses are in.

Don Vincent of RIA sees more integrators becoming industry-specific. ‘‘Integrators are becoming dedicated to one industry, the food industry for example,’‘ Vincent says. ‘‘These integrators strive to become the best in that industry. Some integrators are servicing niche markets very strongly.’‘

The outlook of the robotics market in 2006 is a good one. Despite the troubles of the automotive industry, most other industrial sectors are healthy and poised to invest in robotics to ensure their continued viability. Look to see more robots in the life sciences, arc welding, and in material handling, especially for smaller businesses. Don Vincent sums up the course that RIA intends to take into the new year.

‘‘RIA will focus on small and medium sized companies in 2006. We are introducing these small businesses to robotics by showing them its easy to buy and use robotics.’‘ Small businesses are where growth in robotics will come from in 2006.