Composites and robotics are practically made for each other. Because composites have such a wide variation among them from part to part, flexible industrial robotics is well matched for applying composites in the aerospace sector and for general industry.

Using robotics for applying composites is an idea whose time has come,’‘ asserts Isabelle Roberts, Vice President of Business Development at BRIC Engineered Systems, Oshawa, Ontario, Canada. ‘‘With the intelligence going into the work cells, such as better tools, sensors and vision systems to more accurately measure a part’s dimensions, robots are ideal for composite manufacturing in the aerospace industry.’‘ 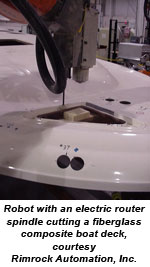 Composite Nature
The characteristics of composites, lightweight and very strong, makes them an atypical material. James A. Hoffmann, Senior Application Engineer, Rimrock Automation, Inc., New Berlin, Wisconsin says, ‘‘Composite materials, whether glass, Kevlar or carbon fiber, require a very high tool load. Composites tend to deflect the robot, so the robot must be very stiff and the part must be fixtured tightly.’‘

Hoffmann also says that when cutting composites, extra consideration is necessary for dust collection and removal. Dust produced when cutting composites is very abrasive, requiring enhanced protection of the robot and peripheral equipment. Hoffmann adds that tool life is an important element that must be taken into account, particularly when composites are cut mechanically.

‘‘Because of the tough nature of the materials that are used to strengthen them, composites are very hard on cutting tools,’‘ Hoffmann says. ‘‘To keep a robotic system productive, integrators need to pay special attention to cutting tool selection, as well as managing feeds and speeds, to get optimal tool life.’‘

To determine the right mechanical cutting tool for composites, Hoffmann recommends that integrators know the characteristics of the material the robot will be cutting.

‘‘Integrators have to understand the composite substrates to pick tools and process parameters accordingly. Also, integrators must look at a cross-section of the material’s substrates to be cut, because that influences the types of tools, processes, feeds and speeds that the robot uses,’‘ Hoffmann says. ‘‘How integrators deal with the composite material and what they use is different for every material.’‘ 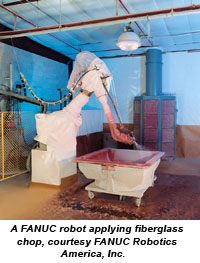 To minimize exposure to hazardous dust generated by mechanical cutting of composites, robotics are increasingly being deployed to cut and apply them. ‘‘Robots built for hazardous environments are used for spraying resins and gelcoats,’‘ says Barton Faylor, Program Manager at FANUC Robotics America, Inc., Rochester Hills, Michigan. ‘‘Also, robots are used to apply styrene, polyurethane and polyureas that do not have a hazardous approval rating, but require the same flexibility and capability.’‘

Faylor went on to lay out other reasons robotics should be considered when applying products with composites: ‘‘Environmental considerations are a huge driver for removing people from hazardous composites toward non-hazardous varieties. The cost-per-pound of non-hazardous composites might be higher than the traditional hazardous variety, but the overall cost decreases because robots are more efficient in using them.’‘ Faylor went onto say, ‘‘Costs do not increase, because less material is used due to more efficient application through robotics.’‘

Protecting people from the hazards of some composite materials is also important to Jim Hoffmann of Rimrock. ‘‘The byproducts of cutting composites tend to be hazardous so people have to wear protective clothing and respirators. Manufacturers that use composites want to take people out of that environment,’‘ Hoffmann says. ‘‘When it comes to applying composites manually, companies have trouble finding and keeping labor. Robotics applying composites have a payback in both labor savings and quality improvement.’‘

Manufacturers that apply composites are under pressure to reduce emissions of volatile organic compounds (VOC), says Hoffmann. ‘‘Using robots gives the ability to control the spray of the resin to lower VOC emissions. Fiberglass spraying creates more of a hazardous environment for people than the cutting of fiberglass does, because the chemicals in the resin typically have a high VOC content,’‘ Hoffmann says. ‘‘Robotics are an efficient way of applying composites, because most of the resin ends up on the part rather than in the air or on the floor.’‘

Mix and Match
Composite materials are comprised several materials joined together to produce a substance that has unique strength yet is relatively lightweight. Because of this characteristic, composites have been a material of choice for the aerospace industry.

‘‘The challenges that composite materials pose for robotics have to do with the process variables that have to be managed and the importance of motion performance. Accuracy and speed regulation in composite applications are more critical than in any other application,’‘ says James W. Winfree, Chief Engineer of Aerospace Applications at ABB Inc., Auburn Hills, Michigan. ‘‘There is a lot of complexity that comes with the end-of-arm tooling, which is far more complex than it is in other applications.’‘

Winfree details some features of the end-of-arm tooling used to apply composites. ‘‘The end-of-arm tooling is a fiber placement device that often has its own control system. Such a PC-based controller is unique for robotic applications,’‘ Winfree says. ‘‘A typical fiber placement head has individual pre-impregnated fibers that are collated then laminated onto the part surface. Each individual fibers can be added or removed as needed, to increase or decrease the width of composite band.’‘

Winfree adds that the process of adding or removing fibers from the band requires that proper fiber tension, heat, and force be applied to the surface while following contours of the part. ‘‘A lot of things can go wrong when applying composites,’‘ Winfree contends.

The parts that composites are applied to tend to be large, such as aerospace wings and fuselages, as well as boat hulls, bathtubs and spas. 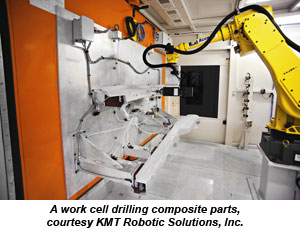 ‘‘Composite parts are typically large and come in a wide variety of shapes. Often [composite parts are made] in a high mix production setting where many different models are produced at the same time,’‘ says Roberta L. Zald, Director of Technology and Marketing at KMT Robotic Solutions, Inc., Auburn Hills, Michigan. ‘‘The challenge is to secure a range of part sizes in fixtures that are flexible while controlling the cost of fixturing. The key is to find features that are common among the parts.’‘

Managing large parts with a lot of contours is also on the mind of Isabelle Roberts of BRIC. ‘‘Curves are not completely predictable. Variation from area to area of large parts has been one of the challenges of introducing automation to the aerospace industry,’‘ Roberts says. ‘‘New vision systems and sensors can make the process more predicable. On-line programming (OLP) trajectory compensation tells the robot what the surface really looks like as opposed to what the solid model says it should look like.’‘ Roberts concludes by stating, ‘‘Aerospace composite components have part-to-part variation, and variation is inherent in the process of applying them.’‘

Barton Faylor of FANUC Robotics also speaks of the wide range of robotic-based composite part applications. ‘‘Composites have variations in the materials, the types of processes, and the effects of them. Composites are made from many materials, and each has unique processing characteristics,’‘ Faylor says. ‘‘Composites come in many varieties, such as polyurethane, polyurea, and conventional resins. Work cells have to manage each variance of these composites.’‘

Part repeatability is another issue for robotics when applying composites. ‘‘With composites, repeatability among parts does vary, but not to the eye. A wing looks like a wing but to a device that is going to cut a hole or do some trimming, the part is different,’‘ Faylor says. ‘‘Touch sensors or a laser camera determines where the wing really is and shifts the robot’s path accordingly when drilling, trimming or cutting.’‘

Faylor adds that some shrinkage occurs with composites, but not always exactly at the same rate. ‘‘Robots need to adapt for that shrinkage,’‘ Faylor says.

Several aerospace parts, such as rudders, are fabricated using carbon fiber composites. Some constituent parts are molded from resin then fastened together by a robotic stitching process. As the parts are stitched, the needle must maintain a proper orientation relative to the part’s surface. For this specific application, a six-axis robot is deployed to consistently and properly hold the needle.

Beaupre adds, ‘‘OLP computes the path for the tape on contoured surfaces, and then post-processes the center line paths to generate a machine-specific part program.’‘ Beaupre says computing the robot’s path would not be practical to do any other way than off-line.

Software enables the end-effector to perform its task properly and consistently. According to Jim Winfree, ‘‘Software plays a critical role in supporting aerospace composite applications, from coordinating motion control with the fiber placement head, to supporting OLP. Robots can provide real-time software compensation for kinematic errors that originate from manufacturing tolerance build up of composites on the part.’‘

Composite Future
Composites tend to be used in a relatively limited range of products and industries. The aerospace sector robotically applies composites to the greatest extent, with marine applications numbering many too. The automotive industry, the largest user of robotics, has relatively few applications for composites, although that is on the brink of change. ABB’s Jim Winfree expresses confidence that the automotive industry must include more composites in their products as a way of making vehicles lightweight yet strong.

‘‘The next five years, the future looks bright for composites. I expect to see widespread adoption of composites beyond aerospace,’‘ Winfree predicts. ‘‘That adoption will be motivated in the automotive industry by higher fuel prices. Automotive designers are going to embrace composites to the same extent that aerospace designers already have.’‘