“As the technology evolves, the challenge with alternative energy is the high mix of product that changes rapidly,” says Tim DeRosset, Director of Marketing with the Motoman Robotics Division of Yaskawa America Inc. (Miamisburg, Ohio) “As a new generation of products comes on board, end-users manage robotics to quickly change products and adapt to new technology.” 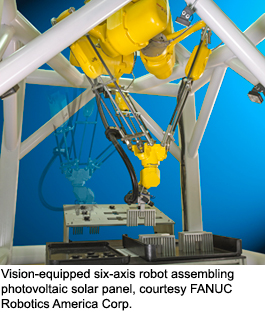 Seeing the Light
Among the myriad of tasks robots are called on to perform in the alternative energy market, assembling photovoltaic solar panels is one robotics are particularly suited for. “Manufacturers use robots to handle very delicate and thin silicon wafers. The thickness of those wafers continues to be thinner, so become even more delicate over time,” says Chris Blanchette, National Account Distribution Sales Manager with FANUC Robotics America Corp. (Rochester Hills, Michigan) “Robots are used for high-throughput assembly of stringers, a task requiring precision.” When assembling stringers onto panels, robots bond bus wires into electrical connectors.

Rush LaSelle, Vice President and General Manager of Adept Technology Inc. (Pleasanton, California) also says end-users of robotics in the solar industry use robots due to the panels’ delicate nature. “Robots are more consistent and gentle than people when handling wafers and solar cells so robots provide higher throughputs with better yield. Components of thin film solar panels are too big and awkward to be handled by people. In emerging technologies where processes might not be mature, the flexibility of robotics are attractive because they can be retooled or redeployed, whereas hard automation cells are frequently scrapped.” 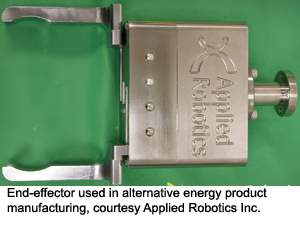 Continuing, Merhib says, “Solar products do not always require traditional material handling, but are created by depositing photo-electric materials onto sheets. That application is more of a fluid deposition process than material handling or pick and place.”

Merhib speaks of dexterous end-effectors necessary to successfully manipulate thin silicon wafers during fabrication. “Vacuum tools used to handle delicate solar wafers are done in a way that the part does not come into contact with the end-effector but puts a blanket of air between the part and the tooling. Other technologies such as servo controls slow the end-effector down before actually engaging the part.” Merhib says materials used in the end-effector’s construction should not affect the surface of the part the gripper is handling.

David Walter, Applied Robotics Inc.’s (Glenville, New York) Engineering Manager, also thinks about the delicate nature of solar power equipment and specialized grippers required to meet high throughput needs of wafer fabrication. “The manufacture of alternative energy systems requires specialized end-effectors. An international solar energy company we worked with broke more parabola-shaped glass bowls than they were creating. Most grippers are not able to handle fragile glass objects at high speeds.” The concave collector and distributor of solar energy were dropped or being squeezed to their breaking point, Walter said. That problem was addressed using flexible robotics in conjunction with a dexterous end-effector. 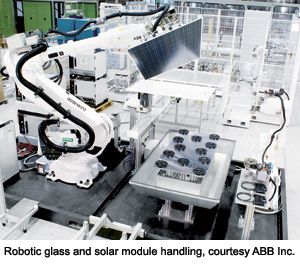 Charles Miller, ABB Inc.’s (Auburn Hills, Michigan) Northern Region Vice President of Sales agrees end-effectors handling silicon wafers must move both quickly and gently. “Cutting wafers thinner requires specialized end-effectors to prevent breakage at very high speeds. Wafers are very fragile and brittle so must be carefully supported throughout the whole range of motion. Wafers could break when picked up or set down and become little airfoils when moved at high velocities.”

Accurate placement of solar panel components is critical, says Miller. “In solar panel manufacturing, accurate placement comes into play in more densely populated solar panel work cells. Robots are soldering and brazing as well as dispensing tape when putting multiple panels together.” After the robot dispenses the tape, it performs a trimming task.

Blowing in the Wind
The scale of wind turbine blades and towers pose demands on manufacturing processes that robotics are particularly well suited to meet. “Integrators work on a larger scale when processing turbine blades and towers. Precision is required for drilling and finishing of surfaces of the nacelle, the housing that contains the generating components, and the very long blades. When putting large turbine blades onto nacelles, robots need precision to ensure correct and consistent alignment,” says Blanchette. “Using intelligent robotics with integrated vision and force control allows the robot to precisely locate and drill holes and finish mating surfaces.”

Merhib also points out robots help overcome the large size of wind turbine assemblies. “Windmill blades are huge. Processes to the exterior are done less practically with hard automation or by manual labor. Putting a robot on an elevator is much simpler.”

Robotics are not often associated with production in less developed countries with relatively low labor costs such as China. “Turbine parts are very large and difficult to manage manually. A solar panel assembly plant in China uses robotics to achieve a degree of accuracy that cannot be done using manual labor.” 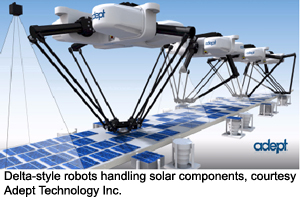 Power Packs
Storing power produced by solar and wind systems requires batteries. Continuous advancements in battery technology requires flexible manufacturing systems. “Battery manufacturing is a demanding industry and requires flexibility because that market is changing very rapidly,” says Blanchette. “Solar and wind power systems are not always generating energy. One strategy uses battery systems to absorb some of this energy as it is generated, to be utilized later when the wind is not blowing or the sun is not out.”

Batteries contain hazardous elements that people should not directly handle. “Lithium ion and lead acid batteries are hazardous to humans. The substrate layer of plates are hazardous and very flexible, but not consistent or precise. Successfully handling them requires intelligent robots to locate the product and well-designed grippers to pick them up without the flexible substrates flopping,” Blanchette says. “Manufacturers use vision-guided robots to accurately and precisely place substrates onto a stack.”

Testing and Inspection
Robots are not only undertaking the production of alternative energy systems, but also inspecting and testing the equipment prior to shipment. “Alternative energy systems are tested in a similar way automotive control modules and electronic assemblies are tested during the manufacturing process. Robots load panel circuits into a test system, the diagnostics are run, and the robot unloads it after the results are determined,” says DeRosset.

Similarly, Miller says robots test alternative energy equipment in a variety of ways. “In fuel cell production, robots are testing assemblies as they go through the production process and the finished product as well. In solar panel manufacturing, vision-enabled robots are used to manipulate test equipment that look for defects. The vision system compares each panel to a norm.” Miller goes on to say robots are programed to either manipulate either the panel or test equipment, and checks each solar panel rather than only checking every tenth one.

Robotic inspection systems look for cracks in silicon wafers. “Solar product are extensively tested at various stages of the production process. Robots use vision systems to look for cracks in the thin wafers and tests solar panels to ensure proper voltage output,” says Blanchette. When the robot finds cracked wafers, it rejects the bad product.

Powering Up
With advancements in software and vision, more applications are acceptable to robotics, says Miller. “The past limitations of robots are being addressed by newer systems and robot manufacturers spend a lot of research and development money on simplifying ease of use, increasing the flexibility and reliability of robotics. That drives robots into applications where they would not be considered previously.” Robots making solar panels, fuel cells, and wind turbines are among those applications.