Robotic Simulation and Off-line Programming: From Academia to Industry

Robotic simulation and off-line programming (OLP) are powerful tools for saving integrators and end-users time and money when designing a work cell. The ability to analyze how a work cell will behave before investing time and money on equipment makes for a smoother transition from concept to reality. “Simulation and OLP allows integrators to study multiple scenarios of a work cell before any metal is committed. Mistakes commonly made in designing a work cell can be made in advance and studied,” says Michael Jacobs, President and Chief Executive Officer of Applied Manufacturing Technologies Inc. (AMT, Orion, Michigan). 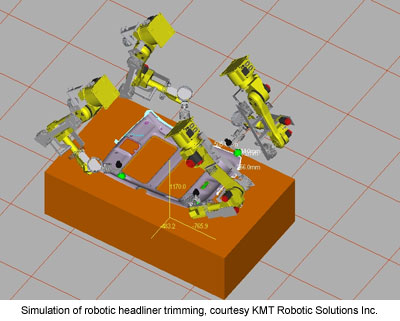 Systems Simulated
“KMT uses simulation to figure out which robot model to use, to verify the robot’s reach and access, and to configure the tooling and equipment around the robot,” asserts Roberta Zald, Business Development Director with KMT Robotic Solutions, Inc. (Auburn Hills, Michigan). “Simulation streamlines and accelerates the process by getting a visual and a mathematic-based conclusion of how the robotic system will look, what components will go into it, and how the work cell will be configured.”

Zald’s colleague at KMT, Simulations Manager Reggie Aquino adds, “Simulation is an engineering tool to estimate cycle time and to find bottle necks on production lines in complicated systems. Simulation is used to determine if a design concept is going to work for the flow of the product.” Aquino notes that simulation is a good sales tool. “Simulation gives customers unfamiliar with robotics a better idea of what robots can do by literally showing them the process.”

Cycle Times
“Simulation is used by Motoman Inc. and our integrators for reach studies and cycle time analysis, and to ensure that a robotic system will do the functions that an end-user needs it to do,” says Gregory Garmann, Software and Controls Technology Leader with Motoman Inc. (West Carrollton, Ohio). “In a cycle time analysis, simulation can show how many parts per hour the work cell can create before any hardware is actually ordered by getting a very good look at the application.” Garmann adds, “A work cell’s details are more accurate if integrators can do a detailed analysis on the robot’s reach and cycle times.” 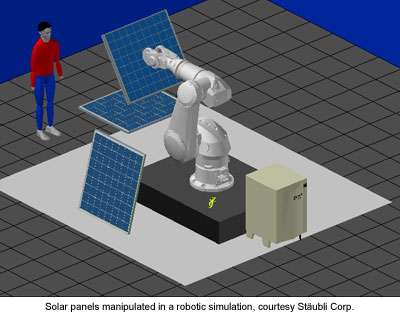 Likewise, “Simulation allows integrators to look at a process, fine-tune it, and see what the cycle times will be,” contends Chad Henry, Applications Engineering Manager at Stäubli Corp. (Duncan, South Carolina) Henry points out that, “Integrators cannot account for all of the factors that contribute to overall cycle time, but a majority can be accounted for while making assumptions based on experience.”

Henry shows how simulation and OLP can save time and money when designing a robotic work cell. “By quickly teaching some points in simulation and running the virtual robot before spending much time developing the application, integrators get a good idea of cycle times. Integrators can move some devices within the work cell, reposition the robot, or use two robots to get the proper cycle time.” Similarly, “OLP and simulation help balance the work load among multiple robots within a work cell,” says Aquino.

End-users can simulate tasks the work cell will do as well as simulating the cycle time of the robot, says AMT’s Jacobs. “Cycle times can be modeled exactly using robot manufacturer's realistic robot simulation (RRS) modules so end-users can know in advance how a system will perform. Simulation has morphed into a larger concept, digital manufacturing, which in turn is a subset of a larger industrial concept of product life cycle management, (PLM), a holistic approach to managing the manufacturing processing.”

Reaching Robots
Simulation and OLP avail themselves to reach studies, says Chahe Bakmazjian, President of Jabez Technologies Inc. (St-Laurent, Quebec, Canada) “Simulation and OLP help in reach studies, where end-users are looking for graphical tools to decide where to place the part in respect to the robot. If the program has problems with reach or joint limits, end-users want tools to manage these problems.” 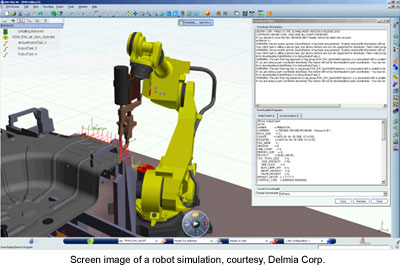 Using OLP and simulation ensures a robot can get in and out of tight areas to perform its tasks, says, Anthony Karew, Senior Consulting Engineer with DELMIA Corp. (Auburn Hills, Michigan) “Simulation and OLP are used to validate the part in the gripper and to make sure the robot has ingress and egress, as well sufficient reach. End-users want more enhanced tools to determine reach and help with robot placement.”

Path Generation
OLP and simulation tools help integrators create the optimal program paths for the robot. “Using mathematical data of the part to be cut or trimmed, OLP can program a much more complex path than could be done than when programming manually. For example, milling a part from a block involves thousands of points of programming and the only viable way to perform that task is using OLP”, contends Zald of KMT. “Most robot manufacturers have their own simulation packages that increase the capabilities of Computer-Aided Design (CAD)-to-path programming. CAD-to-path functionality significantly streamlines the path programming requirements for material removal applications.”

Aquino uses robotic trimming of automotive instrument panels as an example of a challenging application to simulate. “Automotive instrument panels are difficult to program off-line because they have so many tight areas that require trimming,” says Aquino. “Care needs to be taken to ensure that the end-of-arm tooling can access each area to be trimmed and the programmer must look out for interference issues off-line by using collision detection software.”

Aquino goes on to say, “The process of off-line programming with collision detection software enabled can be a time-consuming task, but can also save significant time on the actual production system. Using off-line programming tools is key to improving the efficiency of actual robotic work cells.”

Michael Jacobs of AMT adds, “End-users use robot frames in simulations, a reference coordinate system incorporated into the program. Only a single frame might need to be adjusted rather than an entire path when the robot is put into a factory,” says Jacobs. “With more sophisticated simulation tools, the path requires fewer adjustments.”

Process-intensive applications such as welding have details not present in applications like material handling. “Details in welding applications can be more difficult to simulate,” says Garmann of Motoman. “Integrators may program the robot’s path very accurately but the other information such as welding parameters and settings have to be added to the system to do a complete OLP process.”

Sim School
Robotic OLP and simulation are not only powerful tools for integrators but for engineering educators as well. “Simulation and OLP are valuable in teaching robotics courses and as a practical tool to show engineering and technology students how to design work cells using a computer. Students, while not hurting anything or anyone through the use of OLP and simulation, learn a great deal about robotic technology,” maintains Jim Devaprasad, a professor at Lake Superior State University’s (LSSU, Sault Sainte Marie, Michigan) School of Engineering and Technology, and Director of its Robotics Center.

Devaprasad states, “Students like to see immediate results through watching a virtual robot. Students are as equally excited as using a simulated robot as when using an actual robot.” Devaprasad continues saying, “We teach students how to develop code and see the results by animating the robot. Programming and learning robotics processes in a virtual world is an effective precursor to using an actual robot.”

Simulation and OLP helps train students in robotics work cell design and optimization, says Devaprasad. “Using a generic robotics simulation software package, I can assign students to investigate how different types and models of robots can solve an assembly problem, enabling students to converge to an optimum solution.”

Real Versus Virtual
How closely does OLP and simulation reflect reality on the shop floor? Very closely, declares Stäubli’s Chad Henry. “If integrators have a very detailed three-dimensional layout of a work cell, the program can be very representative of what the actual layout will be. While some variables cannot be accounted for if the integrator does not yet exactly know what devices the robot will be working with.”

The virtual and real worlds could match as closely as is necessary, says Karew. “If integrators do their engineering homework, the virtual work cell can be exactly like the real world work cell. Integrators simulate the work cell, download it to the robot, and touch up the program a little if necessary.”

Greg Garmann agrees. “The difference between the real world and the virtual world will become much closer as calibration tools continue to grow. With higher speed processors and higher speed capabilities in motion control, along with new motor technology, will provide a better response rate of the system.”

As simulation has become more prevalent in robotics, integrators have learned how to better match the tasks a work cell will perform with a suitable robot. “When simulating a work cell, integrators have to size the robot appropriately and make sure the payload capacity is right. I suggest that integrators quickly teach some points in simulation and let the virtual robot run a few cycles to get a good idea of cycle times,” says Chad Henry. “Running the virtual robot should be done before spending much time developing an application.”

Communication between the integrator and the end-users is important, says Henry. “Check with the end-user to make sure you can change the position of the robot, rearrange devices, and make modifications to the end-of-arm tooling.”

Michael Jacobs also believes communication between the end-user and integrator is vital to successful work cell. “When using simulation and OLP, have solid communication with the people who are designing the process and those responsible for implementation of the work cell on the factory floor. End-users need to understand the simulation is part of the entire manufacturing system.”

Ongoing OLP
Jacobs foresees OLP merged with other facets of digital production. “In the coming years, OLP will be incorporated into other digital manufacturing tools, such as virtual commissioning, which is a simulation of the control systems in a work cell. As these tools get used more, integrators will be able to incorporate all of a work cell’s control logic in the simulated work cell.”

Jacobs says simulation and OLP will become more widespread in robotics. “In the past, only large companies could benefit from simulation systems but now smaller companies can leverage OLP and simulation as they continue to be more capable and more accessible.” Jacobs adds that as robot controllers become more adaptive to their surroundings, features such as sensors, vision, touch sense and more sophisticated control algorithms will make simulation and OLP more cost-effective.

Karew sees more robotic as well as non-robotic simulation. “Processes such as human task simulation and assembly simulation will become more widespread. I see more collaboration among multiple engineers working on the same project while based in other states or other countries.”