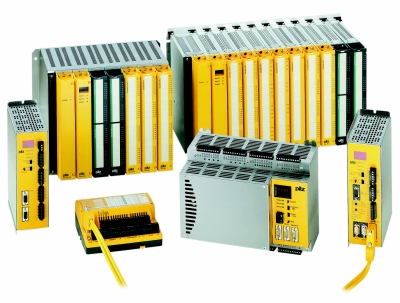 Safeguarding devices for robots essentially fall into five major categories-safety switches, optical devices such as light curtains or safety beams, safety mats, laser scanners, and lastly, bus-compatible systems, according to Roberta Nelson Shea, safety specialist with Honeywell International. While technology continues to make incremental advances, one of the major trends in all these systems is higher functionality at lower cost.

"Today's customer is getting a better quality product with more diagnostics at lower cost," maintains Mike Carlson, safety applications engineer, Banner Engineering Corp. (Minneapolis, MN). "The cost of products and the cost of their integration are coming down, while the ease of troubleshooting is resulting in less downtime."

Carlson mentions two examples of this trend. "Safety mats are actually getting safer with features like zone detection and better fault detection," he says. "And, in the area of perimeter or access guarding, we're coming out with a line of single and multiple beam systems that have very advanced diagnostics and semiconductor outputs."

Higher functionality is the name of the game with proximity laser scanners, according to Richard L. Mills, safety controls division manager, SICK Inc. (Bloomington, MN). "These laser scanners use a reflective method of sensing, in which the sensing field can be configured to different pre-set shapes," he explains. "This allows every point within an area to be guarded and it ensures that nobody enters in or stays in the area during a reset. The advantage laser scanners have is the ability to sense irregular shapes that horizontal light curtains and flat safety mats cannot sense."

The principle behind safety light curtains involves a transmitter sending out an invisible light that is pulsed, according to Shea. A receiver looks for the light that is only supposed to arrive at a prescribed time. "With the optical field in a light curtain being pulsed, there is always a high degree of checking of the device itself, meaning, that for each beam turning on and off, it's just as if a person were sticking their finger in and out of a beam," explains Shea. "The nature of the field is that its constant checking makes it very active. However, with safety mats, there are different technologies by which the intrusion is detected. The most common method of detection is some sort of plate or switching, which detects the intrusion.

"The biggest fundamental difference between light curtains and safety mats is that light curtains have a more active means by which to check their sensing elements," Shea continues. "For a safety mat, although the elements are checked by going on or off, you don't have the same degree of active checking, because how do you simulate in any way the shape or form of the fact that the mat will bend or deflect? In Europe, for example, light curtains are given a Type Four safety rating, and safety mats carry a Type Three safety rating. Does this amount to a big difference? In the long run, not really."

The company's SafetyBUS p system can be used to parameterize and trigger actuators and sensors simply and at low cost. It can also be interfaced to standard fieldbus systems, such as DeviceNet, ControlNet, Interbus or PROFIBUS-DP for communication with the system control, diagnostics, and data routing.

Another area of safeguarding comes in the form of interlocks on safety gates, which now incorporate some new features that enhance the safety of these systems. There are gate switches on the access points to the machine areas, in which the robots or other machines are set up inside a fenced or a guarded area. These access points have a special switch on the doors. "These access switches lock the doors until the controller says that everything is in a safe condition," explains Pat Kanis, president, Castell Interlocks Inc. (Erlanger, KY).

"In the robotics area, one of the problems we've had in the past is that, if somebody inadvertently becomes trapped inside the guarded area, and the door shuts and the machine starts back up, these switches that latch the doors cannot be opened from the inside," Kanis explains. "Now, we've come up with a way of opening these switches from the inside. It is basically a mechanical device that fits to the back of the switch and mechanically forces the latch open, so that the door can be pulled open."

Yet another advance is a trap key interlock, which ensures that a safe sequence of operation is always followed by moving keys from one device to another, according to Kanis. "One of the ways the switches work is that, as long as the robot is in a safe condition, the doors are unlatched so that anybody can gain access to the area," he explains. "By fitting key interlocks to them, we can control who gains access at any time. And we can incorporate these right into the switches.

"We also offer personnel protection keys, which is the opposite of the former situation," Kanis continues. "The key is trapped in the door as long as the door is shut and locked. Once the PLC tells you that the robot area is safe to enter, you have to turn a key to enter the door in order to gain entry. That way, if somebody does come behind you and shuts the door, you would be protected from the robot starting back up because the latch could not be made without that key in place. Then, the circuits could not be completed that would allow the robot to start back up again. We have a lot of different permutations on these types of keys."

Castell Interlocks markets a range of Amgard 2000 safety interlocks that provide a modular approach to safeguarding offering a building block approach. Easy to install and maintenance-free, the interlocks feature self-aligning actuators that tolerate extreme guard misalignment. They are said to be suitable for harsh environments and have been tested to over 1 million operations.

James F. Manji is a free-lance writer in Brunswick, OH.