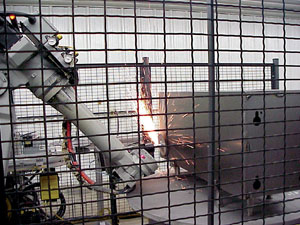 SPM manufactures ATM machine cabinets and telecommunications cabinets. ATM cabinets are made of 12- and 14-gage mild steel, and the single pass welds average 3/8 inch by 1-inch long.  The robot grinds 35 different areas on the ATM cabinets. In addition to grinding off of the welds, the robot also cosmetically grinds an area on the outside of the cabinet to remove the distortion caused by welding on the inside of the box. Telecommunication cabinets are made of slightly thinner gage mild steel and have 25-30 areas that require grinding. Both types of cabinets are sent to a powder-coat line for painting following the grinding operation.

For this project, WVCO, one of Motoman's integration partners, used a six-axis Motoman SK45X robot, equipped with a PushCorp Inc. AFD1000 horizontal active-force control tool integrated with an STC100-2.0 servo motor and automatic tool changer, to grind welds on ATM machine cabinets on two 180-degree indexing rotary tables. The tables are on opposite sides of the workcell, so the operator can safely load and unload a part at one end while the robot processes a part on the other. The workcell protection package includes safety fence, debris screens, safety mats, photo eyes and safety interlocked gates. The Motoman SK45X robot's XRC controller controls all workcell operations; no PLC is required.

The robot performs a two-stage grinding operation using two different grinding media. The first is a coarse-grit flap wheel, and the second is a finer-grit Scotch-Brite pad. Both are mounted on spindles, which enter the cell on a conveyor. A custom lifting device presents the media on the spindle to the robot, which picks it up using a pneumatically actuated clamping collet. The robot presents the spindle to a photo eye, which identifies the type of media. The robot places each spindle onto the appropriate portion of a holding rack.

The Motoman robot alternates between the two types of media spindles to rough and finish grind the part in each cycle. Automatic changeover between the two types of media spindles requires 7-10 seconds. The robot increases the applied pressure on successive grinding cycles to compensate for the wear on the consumable media. The robot automatically changes spindles after three production cycles. The PushCorp AFD1000 horizontal active-force control tool, whose controller is integrated with the XRC robot controller, automatically maintains a constant grinding pressure against the workpiece, regardless of tool orientation.