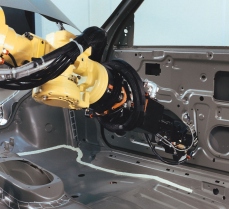 From lavatory sinks to insulated windows to automobile parts, it is difficult to find a product without glued parts, many of them the result of robotic gluing applications.

'Just about any industry that you can think of, from health and beauty aids to pharmaceuticals, furniture, commercial and residential glass, publishing, and white goods, are manufactured using some form of robotic gluing,' says Karl Wirth, Program Manager of Dispensing Systems at Fanuc Robotics.

With the use of new composite materials in products, robotic gluing applications are seeing a growing role in efficient manufacturing packaging, and assembly. Also, gluing is a means by which dissimilar materials can be attached to each other. For example, it is difficult to weld aluminum to steel. The results are superior when these two different metals are bonded together using an adhesive.

Robotics makers are responding to the demand with new robots and accessories tailored for gluing applications. The following are some examples.

CRS Robotics, a robotic maker from Burlington, ON, is marketing a robotic gluing technology that is particularly suited to assembling thermal windows. The A465 six-axis robot with a multi-tasking controller is capable of dispensing adhesives that are used to hold the two panes of glass together as well as bonding the glass to the frame.

The A465 has a two-kilogram capacity and provides 360 degrees of workspace. In addition, this robot has a self-homing network that aids the robot at the beginning of a production cycle, and has incremental encoders.

The reach of the A465 is 710 mm without a gripper has plus or minus 0.05 mm of repeatability, and a working range from 2,286 mm to 4,572 mm. Grippers are available in either a pneumatic version or two servo versions. The servo grippers come with or without fingers, the former with 65 mm of stroke.

The CRS C500C controller, which manages the A465, provides for the even distribution of adhesives onto products that have a multitude of contours. This is especially important in the manufacturing of insulated windows due to the fact that the adhesive can build up on corners and other areas where the robot's speed changes briefly when changing direction.

The controller features the CROS multitasking operating program and utilizes CRS' RAPL-3 programming language. In addition, there are general-purpose input/output ports with 16 digital inputs and 12 digital outputs, two serial ports, and a console port. Other features include a SYSIO port for connecting additional E-stops and devices that are patterned after the front panel push buttons and light emitting diodes.

Likewise, Motoman, the West Carrollton, OH firm, makes robotic systems that can be used for a variety of dispensing applications including, for example, manufacturing of insulated windows. 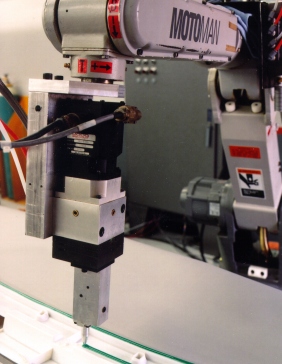 According to Carl Traynor, Motoman's director of marketing, 'These dispensing applications may involve a roll of tape which is dispensed by the robot.  Often there is a feed roll that lays down the tape, with the glue on it.'

The machines of choice for these dispensing applications come from Motoman's UP series. The UP20-6, the UP20M, and the UP50 are six-axis robots that have a payload capability range from six kilograms up to 50. These units have a maximum reach of 1,373 mm for the UP20-6, while the UP50 has a reach of up to 2,046 mm. The SV3 is also a popular model for adhesive dispensing applications. An important point made by Traynor's colleague at Motoman, Jack Justice, is that in these applications 'payload is not as important as increased reach.'

Justice, Motoman's manager for general robotics systems, emphasized the ability of a robot to successfully apply a consistent amount of adhesive over the course of a long path. Because parts such as automotive headliners can be quite large, the capability to reach all corners of a particular piece of product is important.

Waste Goes Down the Drain
The Dallas, TX division of Crane Plumbing was having cost difficulties in the production of their steel lavatory sinks. The problem was a constant necessity of touching-up spot welds used to connect the overflow to the main part of the basin. Four welders were assigned the task of making these welds, while three others were needed to polish them.

In 1997, the Evanston, IL-based company had had enough of this and the decision was made to automate. Crane went to the American branch of Staubli, located in Duncan, SC. Staubli designed a robotic system that glues the overflows into place. An RX90 was deployed to perform this task. The cycle time is 7.72 seconds per unit, and provides a more uniform seal than that made by welding.

The lavatory moves down a conveyor belt where the RX90 picks up the overflow part. Then the robot puts the overflow into place under the glue dispensing nozzle where a uniform coating of adhesive is applied. Next, the robot attaches the overflow onto the proper place on the back of the lavatory.

The RX90 is a six-axis robot with a load capacity of nine kilograms. This unit has a reach of 985 mm to 1,185 mm with a repeatability of 0.02 mm. The maximum speed of the RX90 ranges from 296 degrees per second to 1,125 degrees per second, depending on the axis involved. The adhesive used for the overflow application is hot glue, but not a hot melt glue.

As in all types of manufacturing, the challenge of eliminating waste is important to ensure profitability.

'Because the adhesive materials are so expensive, minimizing waste is important,' notes Karl Wirth of Fanuc. 'Glues are expensive and are used more and more readily. One thing our customers don't like to do is manually touch-up, which costs them time and money.'

With the use of increasingly expensive adhesives and their long cure times, how do robot makers solve this problem? The engineers at Motoman have devised a technique that minimizes wasted glue by utilizing a disposable tip at the end-of-arm-tool.

Motoman's Jack Justice explained: 'It is a tip that mixes the chemicals together, forming a homogeneous solution. If the glue sits too long, you are not going to have the consistency at delivery, or you are going to have wasted materials.'

To ensure that there is less prematurely cured glue in the robot, there must be as short a cycle time as possible between each unit's assembly. The opposite difficulty of cure time is allowing sufficient time for the glue to adhere after it has been dispensed between the two parts it is intended to bond. A clamp or gripper can be used to hold the glued parts in place to maintain surface contact between the material and the adhesive.

Another challenge in robotic gluing systems is the problem of access to the parts to be fastened. The primary method to accomplish this is by using a robot with more programmed axes than is typical of other applications. Don Searcy, vice president of Reis Robotics, advocates this concept.

'The main difficulty is getting proper access to the part. This is solved by using a six-axis robot,' he says.

Reis manufactures a standard line of peripheral equipment or a positioning system for gluing. This system locates the part, positions the part and the robot. Expanding on this point, Searcy comments, 'We can program the positioner, which is driven by the same kind of program as the robot axes. There can be up to 24 axes of programming.'

Reis Robotics, of Elgin, Il, makes several models of robots proficient at gluing tasks. Their RV series of six-axis robots come in payload capacity of six, 16, 60, and 130 kilograms, which reach ranging from 1,935 mm to 2,850 mm.

It is the Reis' RV series of robots that Mercedes-Benz uses to partially assemble their A-class automobiles. The car's interior frame, exterior lower body panel, license plate light cover, rear spoilers and rear window are assembled or installed using 12 Reis machines. With the exception of the window, each of these constituent parts is attached to the lower exterior body panel through the use of gluing. The interior frame is preheated in a robotic cell prior to the applying of a two-part polyurethane adhesive. The glue is mixed in the nozzle at the end-of-arm tool. A similar process is used on the license plate light cover before being connected to the lower exterior body panel.

The exterior body panel and the spoiler are also preheated before being fastened to the interior frame. An RV130 robot picks up the lower exterior panel assembly along with the spoiler, and places them on the interior frame. After the adhesive is cured, the procedure is repeated for the installation of the rear window by another RV 130 robot. A car is completed every 72 seconds.

All facets of the assembly process are monitored by a Reis robot controller, which oversees the preheating temperature, the rate of glue flow, clamping pressures/time, and speed of parts flow. To manage this, Reis has designed a technology that can guide the robot to make precise movements.

Don Searcy described this feature as 'A six dimensional/axis mouse-like system that attaches magnetically to the wrist of the robot. This allows the operator to literally move the robot by hand to put it where it's needed. This can also be done with a computer by way of a teach pendant for more precise movements so that the robot can be positioned for glue applications.' Reis supplies the robot, the controller, and safety devices like light curtains, as well as the integration of the network.

Stick With Robots for Better Gluing Solutions
With increasing frequency, manufacturers are turning to gluing processes for their manufacturing needs. This is true of a large cross-section of industries, from the building trades, to hi-tech, to transportation the trend for gluing applications is on the rise. And across all these sectors is the need for a manufacturing and assembly process that is efficient, precise and economical. Robotic solutions provide dramatic time and cost savings, and are the proven leader in high quality process management for gluing and dispensing automation, as attested in the few examples discussed in this article.