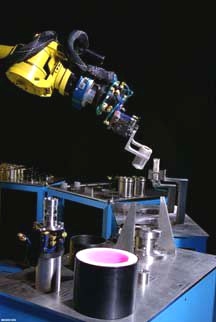 With the fall of the Soviet Union in 1989, there was a drive by NATO and Warsaw Pact countries to reduce the large stockpiles of aging nuclear, chemical, biological, and conventional weapons. Because of the inherent hazards involved, the Unites States turned to robotics as a means of permanently demilitarizing these munitions.

'The work we do tends to be out on the cutting edge,' says Larry Shipers, manager of the System Technology Department in the Intelligent Systems and Robotics Center of Sandia National Laboratories, based in Albuquerque, NM. The unique challenges of weapons decommissioning required an equally unique robotic solution.

The robotics are a pick-and-place application. That is, the robot picks up munitions from a crate or a pallet and places it in a location where a process is performed. While the details of the process vary from one weapon to another, this is the general approach.

'If there is a fuse, a center fire or an initiator, a robot will segregate them. If the munitions are mines or cluster bombs, the system will segregate those components as well. The segregated individual parts are sent off to be further processed,' continued Shipers.

If workers undertook the operation directly, only one bomb could be processed per day. With the use of robotics, up to twenty-four could be done in an eight hour shift. The procedure is lengthy but relatively straightforward. The disassembly process that munitions go through varies for the type of bomb.

One example would be gas generators, which are a constituent of nuclear weapons. Generally, robots are used to open the container that the ordnance is shipped in and removes them. The container is either a crate or pallet. The robot extracts the generator from the bomb. Then, the robot removes a threaded lock ring after which the machine withdraws a closure ring. Next, the robot thoroughly pours out the explosive, ensuring to dislodging any stubborn powder. Over time, the stabilizing ingredient within the propellant breaks down, making the propellant even more of a hazard to workers and the environment. This leads to an increase in the risk of accidental ignition. The subsequent step is the removal of a threaded igniter, and putting it on a pallet.

Often, the ensuing step is a process of cryo-fracturing. This procedure involves a robot placing the munitions in a bath of liquid nitrogen, where it will remain from fifteen minutes to two hours, depending on the size of the weapon. The extreme cold of the nitrogen, less than minus 200 degrees Celsius, makes the ordnance quite brittle, inducing it to break with ease. The robot extracts the chilled bomb and hands it off to another specialized robot. This robot, in turn, places the munitions into a large hydraulic press. There, the powerful press crushes the body of the ordinance so that it cannot be reused. The tooling on the press that breaks the bomb is specific to a particular type of weapon. The remainder is then put into a final destruction phase by a robot. This is a rotary kiln incinerator, a plasma arc incinerator, or a super critical water oxidation system.

Because the robots that demilitarize weapons are dealing with highly dangerous chemical and/or radiation, they must be easily cleaned and maintained remotely.

The equipment needs to be cleaned remotely so that people can enter the workcell for maintenance. When people enter the workcell, they need to be fully protected with bubble suits. The system must be designed with robust equipment so that it requires relatively little maintenance or repair. Should the workcell require maintenance, it can be easily cleaned. There are no sharp edges to tear the bubble suit. The workcell is as modular as possible so workers need to do little to remove and replace a failed component.

The chemical agents are so treacherous that if one drop gets on the skin, it could cause death in twenty minutes unless a worker has been inoculated. When there is a hazardous particle problem, such as a chemical or biological agent, or even nuclear contaminated dust, filtration is more important than shielding. The infrastructure of a nuclear weapon demilitarizing workcell is made up of leaded concrete walls with special windows and filtration systems. The workcell is designed to fit into this environment. Included in the infrastructure is often a cable system that penetrates the shielded walls for controlling the robot or the radioactive compounds within.

The workcells have to be designed to withstand the effects of radiation. This includes radiation resistant lubricants, wire insulation, paint, seals and gaskets. Radiation causes these fixtures to get hard and brittle over time causing premature breakage. Wires subjected to nuclear radiation often break prematurely. A crack could lead to a short circuit, which would likely would result in fire due to the presence of volatile chemicals. Where chemical weapons are decommissioned, a special paint is required to withstand the decontamination solution. This cleaning fluid is sodium hydroxide, a compound that is very harsh on a robot's paint.

The robots are designed for remote maintainability. Once the robots are in an environment containing hazardous or radioactive materials it is pretty tough for a person to enter that environment for repairs or maintenance.

The Urge to Purge
One method that keeps robots in a weapon demilitarization workcell comparatively low maintenance is the act of purging. Often the robot is fully purged to insure that no dust collects inside. Purging consists of the robot's internal parts put under pressure greater than that of the ambient environment. This pressure, which is of compressed air or a neutral gas, prevents moisture, chemicals, and dust that might be radioactive or explosive from getting into the inner mechanisms of the robot. Should any leaks develop, the hazardous elements will remain out of the robot's interior segments rather than going into them.

Another facet of weapons demilitarization that makes it unique from other robotic applications stems from the fact, unlike manufacturing, decommissioning takes things apart.

'When putting stuff together, you usually have a design, you know exactly what is there. You do not have to worry about components being corroded, assembled incorrectly, or human error. Some munitions that come in are at the end of their useful life and there can be unstable chemicals,' says Sandia's Larry Shipers.

When crates of fifty-year old munitions come in for disassembly, it is difficult to know if the shells are full, bent, or even how they were put together. There are a lot of variables that are not present in assembly manufacturing, which can pose potentially fatal problems when dismantling them. When assembling things, even nuclear weapons, it is a hands-on process. The exception is for the radioactive material being inserted in to the bomb. The problem with disassembly is there is usually some sort of contamination, or at least the risk of it. It is important to keep people physically removed from the operation as is possible.

Paint it Ain't, But Painting Systems are Great
The robots of choice for weapons demilitarization are explosion proof painting systems. These machines are either pedestal or gantry configurations, which are in compliance with gas, dust and fiber protection level of Class I, Division 2.

There are applications that use an electrically operated but manually controlled manipulator arms. Such manipulators can go through a box of munitions that has been buried for forty years, and picks stuff out of it. The contents of the box or its orientation could be unknown, so there is not a need for programming the manipulator. An operator looks through a thick window or through a camera, directing the system remotely.

A system that Sandia utilizes for weapons demilitarization is from Staubli's RX series of pedestal painting robots. The RX 60 and RX 90 are from the IP 65 protection class, and can be mounted on the floor or on the ceiling.

He continues: 'Sandia uses robots within their standard specifications in their operating environment. We add the custom tooling, software and sensors, in conjunction with commercial hardware. The software is either commercial or is designed by us. If we can buy what we need, we do so. If not, we have to make it. This is true for both hardware and software. Invariably, we just can not go and buy these items off the shelf, so we have to design and build it ourselves.'

Industrial robots are helping to make the world safer by removing people from some of the most hazardous tasks on earth. From the factory floor to the labs at Sandia, robots provide solutions for even the most dangerous work.