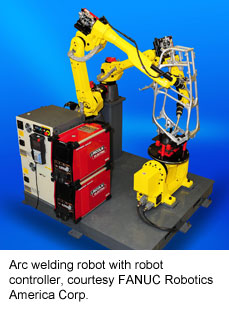 The software architecture of industrial robots, the “brains” of an automated work cell, enables the robot to perform assigned tasks quickly, repeatedly and accurately.

“Robotics are all about the requirements of an application, such as reach, speed, payload, inertia, joint rotation and performance. Robots look different because they can be used for many different applications,” says Claude Dinsmoor, Material Handling General Manager at FANUC Robotics America Corp. (Rochester Hills, Michigan). “Software and controls generally have a baseline architecture but have a built-in unique architecture on top of that aimed at an application.” 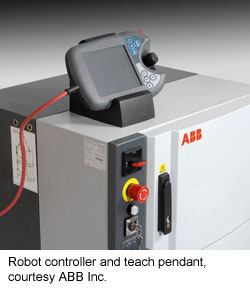 Likewise, Erik Nieves, Technology Director with the Motoman Robotics Division of Yaskawa America Inc. (Miamisburg, Ohio) says, “Robot software architecture is about performance and the user interface. The performance of the machine must hold the accuracy required for the application. The software must integrate necessary technologies to be effective.”

Continuing, Nieves says, “The application drives the manipulator’s interface, which might be unique. However, the software kernel of the kinematics is common across all applications but the end-user’s interface to the robot is driven by the application.”

Nieves cites examples to illustrate his point. “End-users of a palletizing system do not want to look at software functionality reserved for spot welding applications. Both applications might use the same software controlling the robot’s actual motion, but the graphical user interface must be application-specific. The application layer for a painting system will be all about spray rates, nozzles and speed. The robot in the next work cell might be dispensing adhesive so will have a different graphical user interface even if the software is identical to the painting work cell.”

Dinsmoor makes an analogy using the operating system of personal computers. “The software architecture tends to be very unique on an application level. Each application has a common base architecture somewhat like the operating system for personal computers which gives a computer a level of functionality. The software then verges off to the application area, such as Excel, Word or Outlook.” Dinsmoor says robotic software architectures are similar in that “The robot is in a factory to solve a problem. Robot manufacturers drive to have the function of the robot match the application and make the 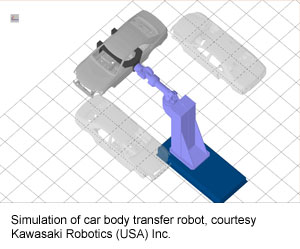 Robert Little, Chief Executive Officer of ATI Industrial Automation (Apex, North Carolina), a tool changer manufacturer, has a similar take on standardized robots and software architectures. “I see a trend moving towards more commonality but the technology advances so quickly that end-users do not stay with one system too long. Tool changers have control modules. The first tool changer we designed used DeviceNet, the standard for several companies. DeviceNet evolved over the last 15 years but companies have moved towards Ethernet or Profinet.”

Little adds that “Standard platforms are publicly available from vendors to implement and end-users know how they operate, helping them to standardize. Commonality puts more complication onto tooling vendors but less complication onto the robot.”

Robot software architecture has evolved and continues to do so, says John Dulchinos, President and Chief Executive Officer of Adept Technology Inc. (Pleasanton, California). “Robots through the 1990s  and the early 2000’s were viewed as the center of the manufacturing universe and many end-users wanted to make the robot controller absorb all control functions within the work cell. The controller was expected to take on an expansive role in managing an entire work cell’s architecture.”

Dulchinos says robot controllers have matured and established plant-wide software and controls architecture, such as Allen-Bradley or Siemens programmable logic controllers (PLC). “End-users ask us how to more effectively connect their robots to those architectures rather than having the robot take on a bigger and bigger role in a factory.”

Robot software and controls architecture plug seamlessly into a PLC’s architecture whether Rockwell’s or Siemens’, Dulchinos says. “Robots cleanly connect to today’s manufacturing plant standards. Controls have become significantly smaller so can be built into the robot’s base, using much less valuable real estate in a plant. Integrating control architecture functionality directly into the robot lowers costs, is more space efficient and allows for high-speed networks such as Ethernet I/P, Fire Wire or USB to directly connect into PLCs or personal computers.”

“Off-the-shelf computer hardware could be used as a robot controller. The latest computers available to consumers run much faster than those employed in most robot controllers,” explains Hunt. “The issue is being robust enough for the environment. Robot companies spend a lot of time and money proving out their hardware and software solutions for safety and robustness. When your personal computer crashes, does a two-ton iron arm swoop down and take out your living room wall? That possibility gives robot manufacturers pause when designing the system.”

Dulchinos concurs with Hunt’s analysis. “Personal computers are not designed to be a real-time, high performance operating system but puts a high emphasis on mouse and keyboard tasks and on the display. These are low-priority tasks in a robot application but high priority to someone using a personal computer. Off-the-shelf personal computers are not as effective as a purposely-built robot controller because the quality is not up there and does not have high enough reliability.” Computers lack electromagnetic current protection but can augment a broad set of application software and peripherals, Dulchinos says. 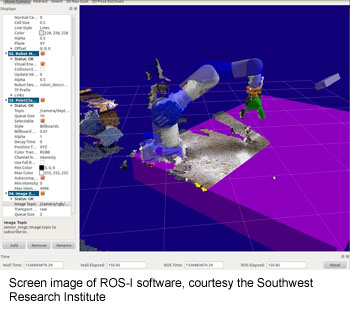 Software architecture of industrial robots tend to be proprietary and dedicated to that specific robot make. While proprietary robot software will not go away anytime soon, a trend towards open source robot operating systems got a big boost with the advent of the Robot Operating System-Industrial (ROS-I).

Hvass’ colleague at SwRI, Jeremy Zoss, Senior Research Engineer, says “ROS has been widely adopted by university researchers. The research community is often several years ahead of offerings by commercial robot vendors, and ROS-I provides the bridge to leverage that new research on existing industrial platforms. ROS-I may not be necessary for basic pick-and-place applications, but enables industrial robot users to deploy robots in more unstructured and collaborative ways.”

Hvass agrees but adds a caveat. “We do not want to imply that ROS-I provides critical human-safety functions yet.  Industrial safety standards still apply.”

Zoss goes on to say, “ROS-I gives end-users the opportunity to use newly developed code from academic researchers without having to work around limitations of proprietary controllers. ROS-I provides a common interface to a variety of different industrial robot platforms, meaning end-users can deploy a single application on a variety of robots with minimal code changes.”

Robot manufactures increasingly accommodate ROS-I into their robot's software architecture. “Our robots have a tight connection to the ROS platform,” says Dulchinos. “Our software products plug into the ROS environment for end-users who want to leverage an open source strategy for software.”

Motoman’s Erik Nieves says, “ROS has achieved a critical mass within the development world among researchers and is easily portable. A researcher in California can easily collaborate with a researcher in Germany or Taiwan. ROS is very powerful, a good open source robot software. As such, the research community embraced the system.”

How has ROS-I impacted the robotics industry?

“Researchers are taking advantage of low-cost technologies, attaching them to a robot and writing a little piece of code using ROS to achieve functionality. Industrial robot makers that do not adopt an open source-friendly approach are frozen out of being able to use these new technologies,” says Nieves. “When we see enough examples of using an open source-friendly robot controller across the robotics industry, then we will see the industry getting serious about an open source strategy.”

ROS-I will become a significant element in the robotics industry when the platform becomes sufficiently stable, is compatible with most major brands of industrial robots and finds acceptance among large end-users of robotics. “The ROS-I consortium will be successful when it brings in big end-users in automotive and other industries that want to leverage the ROS system to solve problems on their factory floor,” says Nieves.

Shafi’s webinar. “Will look at the evolution and design of motors and link design of industrial robots. A tutorial will explain the functions of robot controllers and the three levels of software architecture: controller level, enabling application and vertical solution levels.”

Shafi cites how smarter architecture gives better management over a work cell. “In the past, controllers had one processor handling vision and communication. Now, vision and communication are separated by different processors. When a robot welds contoured surfaces, the robot has greater repeatability, precision and higher throughput with a multi-processing control architecture.”

Shafi will examine the history, development and future trends of industrial robot design, their controllers and software, plotting trends and how flexible automation could be applied to new products and markets.

Faster, Cheaper, Safer
When will the architecture of industrial robots allow truly collaborative work with humans without requiring fences or light curtains?

“Robots can work alongside people but at low performance levels. I think that will change,” predicts Dulchinos. “In five years, expect to see more robots built to safely work around people while their performance goes up.”