Rise of the Machines

Robotic technology is nothing new to the finishing industry.  For decades, painting robots have been used in automotive, aerospace and general industrial facilities.  At the same time, the hefty price tags associated with introducing one or more robots to a facility kept many small and mid-size job shops in a modern day Dark Age.  However, that is beginning to change.  Thanks to a new breed of smaller, more flexible units, robots are quickly making their way into small and medium-sized job shops with a Terminator-like perseverance that would make even Ah-nuld proud.

Until recently, job shops have been slow to embrace robotic technology.  That’s because of the ‘‘overkill’‘ factor, according to Barton Faylor, manager of new products at FANUC Robotics America, Inc.  ‘‘If you have a large job shop that handles short runs of multiple part types, you’d want to buy the biggest robot you can for your money,’‘ he says.  ‘‘But if you’re only going to buy [robotic] equipment for glove box covers, why buy a bigger robot?’‘  Because many small to mid-sized job shops focus on those large production runs of one or two products, they’ve been forced to buy a large system or hold off on automating altogether.

Years ago, another obstacle was the relatively steep learning curve for ‘‘teaching’‘ the robot and training its human operators.  So even if job shop owners could afford the capital expenses associated with introducing a robot into their plant, they may not have been able to afford some of the ancillary costs, such as shutting down the paint line for several days while the necessary training takes place.

But today – thanks in part to the demands of lean manufacturing – suppliers and finishers alike are beginning to realize the importance of maneuverability and flexibility on the shop floor.  The result is a new generation of smaller, more affordable robots designed for specific tasks, but versatile enough to take on new projects as required. 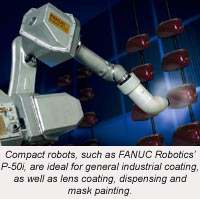 Flexibility and Efficiency
Included in the new generation of robots is the FANUC P-50i , a compact robot designed for the application of general industrial coatings, as well as lens coating, mask painting and dispensing.  The six-axis machine is the ninth in a generation of FANUC coating robots designed to operate in hazardous environments.

In developing the P-50i, one of the major considerations was the robot’s footprint – the amount of space that it would occupy on the job shop floor.  The base of the P-50i occupies just 492 sq mm of space, and the unit can be mounted from walls or ceilings, freeing up even more real estate on the floor.  According to Faylor, it also makes way for a potentially cleaner painting environment.  ‘‘By using an invert or wall-mounted robot, you are able to make the booth floor easier to clean,’‘ he says. 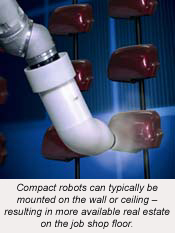 According to Faylor, size is just one of the factors that FANUC’s engineers looked at as they developed a robot for use in small work areas.  The P-50i has been engineered to be able to accommodate manifold-mount spray guns and rotary atomizers. ‘‘One of the things we did was we wanted to make the P-50i have the payload capabilities to handle the wide range of applicators that we’re seeing in the industry,’‘ he says.

The engineers of the P-50i also took pains to protect it from the sometimes hazardous conditions – such as dust and dirt - that sometimes exist in manufacturing environments.  The robot utilizes a hollow-wrist design which allows for all of the hoses used by the P-50i to be stored within the arm of the robot itself, protecting them from the elements and giving the robot a greater degree of mobility. ‘‘When you are painting a part such as a mirror housing, if you have external routed hoses, then not only do you have to worry about the arm hitting things, you have to worry about the hoses flopping around banging into things’‘ says Faylor.  ‘‘By using the hollow-wrist, we are containing the hoses and preventing those collisions from happening.’‘  The hollow wrist design also eases the burden on programmers, allowing them to focus exclusively on the robot motion as it pertains to the painting of the part.

Easing the Learning Curve
FANUC realized that a smaller, more flexible robot would only be a minor improvement if it was not accompanied by a tool that could help job shop owners streamline the sometimes complicated and time-consuming robot teaching process.  Consequently, the company’s software developers created PaintPRO™, a PC-based simulation tool designed to simplify robotic path teaching and paint process development.

The concept behind the PaintPRO™ software is a relatively simple one.  Using a personal computer, the operator views a graphical representation (typically a CAD drawing) of a part and determines what areas of that part will be coated.  The software also enables the user to compare and evaluate several different painting methods.  He can then plot out the robot’s paint path manually, or instruct the software to do so automatically.  PaintPRO™ does not require the use of a teach pendant (a portable control device which requires the operator to physically to lead the robot through the desired sequence of events), so all of the teaching can be done from the operator’s PC. 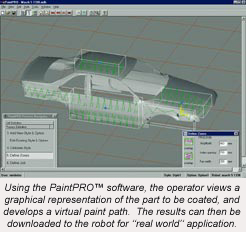 ‘‘[PaintPRO™] is essentially is a virtual robot system,’‘ says Faylor.  Not only does the software disentangle the teaching process – reducing the amount of time that it takes to program robots – the fact that it is a virtual process means that programmers can teach the robot without having to shut the production line down for hours, or even days.  Once the paint path has been finalized and validated, the path can be downloaded to the robot for application.

Looking Forward
Faylor says that the development of the PaintPRO™ software is representative of an industry-wide movement to simplify the robot teaching process for smaller job shops, something which he expects will be a major focus for FANUC and other companies in the next few years. ‘‘One of the things that the industry has always asked is, ‘How do I teach parts faster?’’‘ he says.  ‘‘In the near future, we’ll see more efforts to streamline the CAD-to-path process.’‘

Because robots are becoming more and more flexible, Faylor believes that we can also look forward to more creative uses of robotics in the painting industry.  ‘‘We might start using robots to manipulate parts and move them around while they are being sprayed,’‘ he offers.  Doing so would allow smaller robots to paint large parts.  Another possibility – spawned by the growing demand for UV curable coatings – would be to use robots to maneuver UV lamps around complex parts.

Regardless of whether job shop owners are looking to invest in robotics now, or considering it for the future, Faylor says that it is important that prospective buyers do their homework.  ‘‘FANUC is one of several robotic suppliers,’‘ he says.  ‘‘There are a lot of good choices out there.  The end-user is not stuck with a single approach, nor is he limited to a single technology.  Most of the major robotic suppliers have application centers available.  I think it is important for the buyer to not be afraid to want to see the technology in action and even take it for a ‘test drive.’’‘