PC Evolution Into Robotics to Be Showcased at Robots & Vision Show 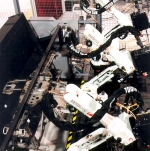 From Motoman Inc. (West Carrollton, OH) comes the XRC robot controller that controls three robots and external axes. This results in simplified programming and higher productivity, since I/O handshaking between the robots is eliminated. 'Programming three robots has been simplified with features such as collision avoidance software and simultaneous program control,' explains Carl Traynor, director of marketing for Motoman Inc. 'Collision avoidance software runs independently from the application software and minimizes collisions due to programming errors. The XRC controller allows each robot to work simultaneously on a single part, or independently for unrelated applications.'

'There are major advantages with the collision avoidance software technology,' says Erik Nieves, manager of technology advancements for Motoman Inc. 'We are literally tripling productivity, because where you have one part that would have required three times the cycle time, now you can have as many as three robots working on the same part simultaneously.'

'The controller's network represents a new generation of intelligent automation for the marketplace,' says Joe Campbell, vice president of marketing for Adept Technology. 'We're offering the robot control in a reduced form factor and with ease of installation, troubleshooting, and support.'

The new series will be initially launched fully configured for standard applications that do not require vision or conveyor belt tracking. The internally expandable SmartController will come with full support for AdeptVision AVI and conveyor belt tracking for motion and vision applications. The SmartControllers feature several high-speed communication interfaces, including Fast Ethernet and IEEE 1394, also known as FireWire. The IEEE 1394 interface is the backbone of Adept's new distributed controls architecture, which was initially introduced with the company's SmartModules. The SmartControllers offer scalability and support for the company's new IEEE 1394-based digital I/O and general motion expansion modules.

FANUC Robotics North America Inc. (Rochester Hills, MI) will feature its new ARC Mate 100i Model B in an arc-welding cell working on a tubular part. The robot has a compact wrist for easy reach and has six axes payload capacity of 6kg exclusively designed for arc-welding applications.

The motion envelope of the arm includes that of the previous model and has 8% larger horizontal stroke. This large motion envelope enables the robot to weld larger parts, such as frames of auto parts, construction machines, etc. The wrist size is also 19% smaller, which enables the robot to enter into smaller openings in the workspace. The robot joint speed is significantly faster, making the cycle time shorter.

The cell will also demonstrate ARCworks PRO PC package, which acts as a production supervisor to maintain high throughput and quality from an arc-welding system.

The cell will also feature the new i Pendant, a color graphic user interface device. This pendant provides a user interface to the R-J3i Model B controller. The intuitive color graphic interface, presented in a multi-window environment, makes the i Pendant easy to use and learn. It also provides the user with integrated help and diagnostics functions as well as enhanced robot and process data. This provides an integrated environment for displaying critical information at the robot.

'We've been spending a lot of time with connectivity on Ethernet and getting it to the point where we have strong support for Internet and Ethernet standards in and out of the robot,' explains Claude Dinsmoor, general manager for product development for FANUC Robotics. 'Ethernet is standard on the RJ3iB as it was on the RJ3. We support file transfer up and down to the robot, both client and server, which makes it very easy to back up or to get files off a central server in the plant. We will be coming out with some innovations that will allow web access into the robot. The robot as shipped can come with a web server option. So you can literally make it part of your plant network. Every robot could be a website, which will enable customers to put a home page in the robot that will inform them how the robot is doing. This enables the engineer to view the operation from any PC within his factory network.'

Dinsmoor goes on to say that the RJ3iB architecture has been optimized both for running the robot and for providing communications capabilities. 'The multi-processor was an innovation when we went to the RJ3 series that allowed us to distribute the processing required to put us on Ethernet and Fieldbuses separately from the processing that we use to actually run the robot and execute process control,' continues Dinsmoor. 'We've actually been working on executing an architecture knowing that connectivity will be the next major requirement from our customers. We feel that this is one of the areas of innovation for robotics over the next decade.'

Another company that is leveraging the Microsoft Windows NT and Windows 2000 operating systems is ABB Automation Inc. (Auburn Hills, MI). 'We're using the Visual environment from Microsoft and also Java for network applications for browsers on the robot,' says Dave Hanby, vice president of software applications for ABB Automation. 'We're using open standard browsers, which will enable engineers to monitor robot performance over a common network using common protocols. This gives the user an enormous amount of power without having to use custom clients and custom software. If the user is familiar with using an internet browser and HTML, he can visualize whatever he needs. He can format it in the way he wants to use it. And also, we allow him to modify the web server inside the robot. So if he wants to display different types of information and format it in a method of his choice, he has that capability.'

Hanby goes on to say that many controls manufacturers are starting to use general purpose computer architectures and running emulations of their PLCs under common operating systems. This provides an opportunity for the company to merge the two control types because it is running common operating systems. 'It gives us the advantage of being able to combine a robot controller with a PLC,' continues Hanby. 'This not only reduces the cost to the customer, but also gives him a strong integrated environment-no more having to write robot programs and then trying to connect them to I/O and then to a PLC which is either over a network or through discrete I/O. We can use a common I/O system and we can add or augment the robot control to run a full-blown PLC.'

From KUKA Roboter GmbH (Augsburg, Germany) comes the Soft-PLC, which combines the functions of a PLC with the features of an industrial standard PC. This controller is specially designed for integration in a standard PC. 'It enables real-time control and communication at microsecond speed and includes a range of features such as scalable performance options, open interfaces, and reduced cycles,' says Heinrich Munz, product management, manager concept validation. Soft-PLC saves on extra control hardware.

Applications include work as a robot-integrated PLC, performance as primary plant control, and the capability to customize solutions in welding, gluing, and painting.

The open architecture PC-based Universal Robot Controller using Windows NT as its operating platform will be on display from Robotic Workspace Technologies Inc. (Fort Myers, FL). The Microsoft platform makes it possible to introduce what is claimed to be the world's first universal robot programming language, according to Walter Weisel, president/CEO/chairman of the company. The programming language is called RobotScript and it will run any robot controlled by the universal robot controller.

All robots use programming languages to command the robot to move to specific locations, signal outputs, and to read inputs. The programming language is what gives a robot its ability to execute a task, to work with peripheral devices like sensors and conveyors, and to make decisions. It defines the limits of the system's processing capability and flexibility.
'Currently, there are no standards for robot languages,' explains Weisel. 'Each robot manufacturer has developed its own language, each with its unique syntax and data structures. Most factories use multiple robot types and brands and multiple robot languages. Therefore, robot programmers must be proficient in many robot languages or several programmers, each specializing in one language, must be kept on staff.'

RobotScript is based on the Microsoft interpreted computer language Visual Basic Scripting Edition or VBScript. The universal robot controller that is used with the language is an open architecture PC control. When applied to older robot arms, it effectively replaces many of the original expensive electromechanical and proprietary components with software operations. Built-in capabilities include networking, the ability to interface with existing automated systems, and remote connectivity for monitoring and reporting.

The URC is designed to 'plug and play' using the exact plug connectors and wiring going from the old robot arm to its old control. There are significant spare parts cost savings for multiple robot users who switch their older robot arms to the URC.

The URC is said to offer equal or better performance than the original robot controller for a robot arm in good condition. There are increases recorded in data processing speed using the Pentium Series Processor technology. Flexible, expandable I/O and up to 32 axes server control offer system integration possibilities.

As an example, Weisel says that the majority of robotic systems came on the scene in the early 90's. 'So, if you have 80,000 robots that are between 8 and 10 years old, they still have another 10 to 15 years of life in the mechanical arms,' he avers. 'Those robots can be given a new lease on life for a fraction of the cost that it would take to buy an entirely new installed base of robots.'

James F. Manji is a free-lance writer in Brunswick, OH. He specializes in manufacturing automation topics.