Muscle isn't enough. For a motion system to operate effectively, it needs some sort of overarching command capability, whether that originates from a central source or is distributed on axis-by-axis basis. Just as applications vary widely, for example from semiconductor processing to dockside cranes, so do the control solutions. Today, vendors are broadening from the traditional PLCs/motion controller design, to deliver alternative control solutions ranging from multicore computer processors to embedded microcontrollers to FPGAs. Let's take a closer look.

For years, the PLC was the primary tool for electronic machine control. As axis counts climbed and path planning became more sophisticated, the computational burden passed to dedicated motion controllers. Adding onboard memory and processing power to drives allowed them to support distributed control architectures, daisy chaining drives together in master-slave configurations. That same time period saw the emergence of soft motion – changing from PCs to microcontrollers.

Soft motion is an expression of the greater trend of executing functionality in software rather than hardware, as exemplified by technologies like software-defined radio. In some ways, soft motion grew out of popular demand, says Sal Spada, Research Director at the ARC Advisory Group. “Oftentimes, machine builders had to switch to so-called PC platforms because they couldn't get the performance they needed from a standard PLC platform.” The changing requirements of the industrial automation market outpaced the design cycles of PLCs, causing machine builders to seek other options. Soft motion allowed industrial users to leverage the advances of the greater PC market, along with its economies of scale, to get more computational power. 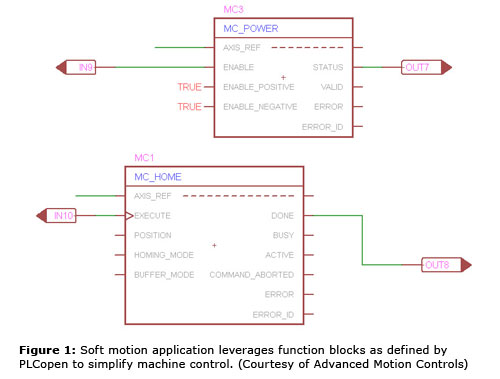 Forget about the blue screen of death that you probably associate with PCs and Windows operating systems. The types of PCs that enable soft motion don't face the same perils as your home computer. The software is designed for interoperability and the system performs just a handful of clearly defined tasks. Worried about the determinism of communication via a packet-based system like Ethernet? Don't be, says Jason Goerges, General Manager at ACS Motion Control (Bloomington, Minnesota). "The name soft motion conjures up some ideas of not being fully deterministic and not being as high-performance as a dedicated hardware-based system,” he observes. “In our experience, soft motion is actually the opposite.”

In some cases, the implementation is transparent to the end-user; in others, manufacturers embed PC cards in their own housings, resulting in products that look very much like PLCs even though they are PC based. In either case, what the customers care most about is whether the solution offers the performance and reliability levels they need.

Soft motion in action
The most direct implementation of soft motion is an application that operates on a commodity industrial PC, coupled with intelligent drives. In this instance, the hardware platform is transparent to the software. "It incorporates at its core the ability to send commands to the drive so the intelligence for motion can be in the drive but the command for the path is in the software," says Karl Meier, Director of Marketing at Advanced Motion Controls (Camarillo, California). This particular system operates on function block programming as defined by PLCopen and the IEC 61131 standard (see figure 1). Users can take advantage of a library of existing function blocks; including a proprietary block that can translate C++ code into function block.

Some vendors work with a combined hardware/software solution, for example with multicore processors. ACS started out with a hardware-based solution, an embedded multi-processor architecture utilizing PCI bus communication. It was an approach designed to deliver enough bandwidth to support ultra-high-speed/performance applications or systems that integrate additional capabilities like machine vision. More recently, the company has upgraded its architecture by taking advantage of multi-core PCs to implement soft motion, and relying on real time Ethernet (EtherCAT) to provide communication to devices such as motor amplifiers. To implement soft motion, they erase Windows from one of the cores and implement a proprietary real-time operating system (RTOS). The core that runs the RTOS focuses on motion and time sensitive machine control tasks, and is protected from the rest of the system. Meanwhile, the Windows-based core can handle noncritical tasks like the HMI interface or off-line simulation.

It's an approach that delivers the benefits of soft motion without exposing the system to the instabilities of the Windows OS. "If you logically isolate the non-real-time application from the real-time soft motion then you can achieve independence," says Goerges. “You might get the blue screen in Windows but your soft motion will still continue to run.”

The two cores communicate via a high-speed virtual TCP/IP Ethernet link and shared RAM. The company is working on expanding its platform to support the increased processing power of next generation CPUs, which is critical to enabling new features like a redundant ring-type architecture to ensure a resilient network.

Embedded solutions
The next level of embedded control is typified by Lenze (Uxbridge, Massachusetts), which includes a soft motion platform based on an ARM Cortex MCU in place of the standard PLC/motion controller combination. Designed for classical embedded electronics, the ARM Cortex provides limited capabilities. It can't do synchronized motion but it can handle very simple positioning and electronic gearing while remaining compact, economical, and efficient. 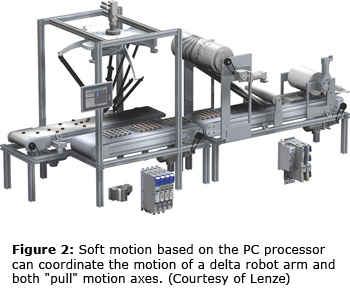 For more complex motion tasks, the company offers an embedded solution based on an Intel processor that can handle tens of axes. It can also handle tasks like coordinating the control of a delta robot arm simultaneously with controlling four or five additional axes, for example (see figure 2).

To extend this solution for applications that would tax even a high-performance processor requires a solution that is also programmable, but in hardware. Combining an embedded processor with a user-programmable FPGA allows some of the control logic and the I/O triggering to be implemented in hardware, while trajectory generation and higher-level processes still live on the processor. With this solution, users can get the flexibility they want at the ultra-high speeds they need. “The combination has the ability to really get into applications where people are pushing the edge of what's possible with specific tasks," says Nate Holmes, Product Marketing Manager at National Instruments (Austin, Texas). "You can use the approach to solve a variety of applications with a variety of form factors and requirements." An array supporting a 300-mm wafer process for semiconductor manufacturing could be easily reprogrammed to handle 450-mm wafers, for example.

One of the key philosophies underlying the platform is accessibility. Normally, FPGA programming requires skills in machine level languages like VHSIC hardware description language (VDHL). The NI platform makes it easy for the user to program the array without intensive programming experience.

Simulation
Platform aside, Spada considers the real advances to be in the development tools. "There's a tremendous breakthrough in terms of the simulation and diagnostic tools that are being delivered with these platforms," he says. "It's giving the engineers tools right on their motion control systems that were not available 10 years ago. They can solve very subtle motion control issues very easily without having a lot of expertise.”

Today's soft motion platforms make it easy to integrate simulation in a way not possible with conventional controllers. "Soft motion allows you to use all the other tools that people have been developing for the main control system: simulation, control design, model-based control," says Holmes. "Before, those probably wouldn’t have run on your motion controller. It was a fixed function box. Now, you have the ability to use all these other tools at once.” Simulation allows design teams to make informed decisions about motors, drives, etc. earlier in the process. Today's platforms can generate advanced algorithms, validate performance off-line, then generate code automatically. The design, integration, and tuning processes all become more efficient.

Of course, having the tools doesn't guarantee that the market will use them. Several machinery cycles need to pass before the widespread adoption of new technology, which can take five or six years. “I think there's always kind of a lag behind what is really possible versus what's actually applied," says Spada. "90% of the machine builders probably won't even touch those types of technologies but in some markets they need to eke out every bit of performance they can. When you're doing things like nanometer-type control, it's absolutely essential to look at those types of solutions.” Of course, being an early adopter in your market sector is also a good way to gain an advantage over the competition.

To be fair, the level of programmability and openness delivered by soft motion does have some drawbacks. One concern is whether a machine builder can guarantee performance if much of the system operation is open and software programmable. "How do you certify that your system will always fail safe the same way every time?" asks Holmes. "If it is configurable, the end user could go in and change it. While openness creates value for end users, it also makes keeping system behavior consistent and reliable much more challenging."

Another challenge is that maintenance technicians who are completely comfortable with swapping out controller boxes may not possess the right skill set to solve problems with the software layer of soft motion. On the bright side, today's networked components allow the OEM or integrator to log on to a device even halfway around the world to address software problems and apply updates quickly and easily.

As the technology gets more capable but also more complex, the question is how to make it accessible to the greater market of machine builders, plants, and so on, but in a way that is both effective and safe. "It's something that I think a lot of people are struggling with," says Holmes. "Yes, they want faster operation and higher throughput but to do that, they feel that they need a control specialist to make it work. I don't think that's a maintainable solution long-term. We need to advance the technology but it's going to need to be packaged in a way that people can use out of the box." As the latest crop of soft motion entries shows, the industry is making great strides toward delivering user-friendly solutions that improve performance and speed development time for the right application.