One of the overriding focuses today in motion control is adding intelligence to the system. Nowhere is this trend embodied more than in the development of intelligent motors. An intelligent motor integrates some or all of the support electronics into the motor itself, so that it is a single unit that can be installed or removed with a limited number of cables. 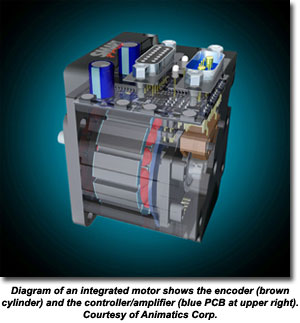 An intelligent motor can integrate just the drive, or both the drive and controller, or even drive, controller and encoder electronics. They can also incorporate elements like digital signal processors (DSPs) or field-programmable gate arrays (FPGAs) to permit sophisticated operations like observer control, which is based on mathematical modeling of non-linearities.

“They’re much less likely to fail, but even when they do fail, anyone who can turn a screwdriver can replace the whole control system,” says Robert Bigler, CEO of Animatics Corp. (Santa Clara, California), which holds seminal patents in the area. “If there’s an axis failure on a machine, you don’t crack open a cabinet full of controls, pull out schematics and fly engineers in, you just get a screwdriver. You don’t have to have downtime if you keep a spare.”

“If you’re running a factory, it certainly makes it easy to pull out that motor and replace it,” says John Mazurkiewicz, product manager at Baldor Electric Co. (Fort Smith, Arkansas). “You save on maintenance time in terms of troubleshooting. But you are replacing the motor and the electronics, so it’s a more costly item than if you replace only the motor or the feedback device or the external electronics.”

The application decides whether an intelligent motor or a conventional system is best, says Dan Jones, president of Incremotion Associates Inc. (Thousand Oaks, California). In a semiconductor fab, in which five or ten minutes of downtime can cost hundreds of thousands of dollars, the ability to swap out an integrated part without squandering time in troubleshooting is critical. In the case of a machine tool, timing is less critical. “You’re allowed maybe a couple of hours to break that down,” Jones says. “There, you might just take a component out. It’s a case of different strokes for different applications.”

Simplified Development
Intelligent motors also offer potential advantages in the design phase. Engineering cable harnesses for motion control systems can be extremely time consuming. Intelligent motors eliminate the need for that design, as well as for the design of controller cabinets. This not only speeds development time, it can have the additional benefit of reducing overall system footprint.

The motors are the essence of distributed control, though their control capabilities can also allow motors to be daisy-chained together and networked. “There’s a practical limit, based on the size of the motors and the gauge of the cables,” Bigler notes. “The smart motor can be a full distributed control system where intelligence is at the node, or it can be a centralized system in which all the motors are just slaved to some central PLC [programmable logic controller] in the cabinet.”

Courtesy of the electronics, integrated motors also offer varying levels of programmability. Many intelligent motors have at least some capacity to react to I/O and perform basic motion tasks. In other words, there is a growing ability for motors to perform control tasks beyond their own motion, even to the degree of actually running a machine.

The Cost Comparison
On the face of it, adding components to a motor would seem to drive the cost up. Not so, argues Bigler. “Making an integrated motor forces you to simplify. Engineers designing traditional motion control systems tend to grab this, grab that, throw it all together. You don’t have that luxury when making an integrated servo.”

The additional components add size and weight to the motor, and minimizing their number reduces both, not to mention decreasing potential points of failure. “It really puts the onus on the initial design. It forces you to say, ‘how do I get rid of this part? How do I get rid of that part?’ Maybe the CPU can perform this task, or you could get a more powerful CPU and have it do that task, too. It forces you to minimize the design.”

Some of what is removed involves components to support the cables, such as line drivers for encoder signals, differential line receivers at the receiving end, noise immunity circuitry, and so on. An integrated motor removes the need for conversion of digital to analog signals for torque commands, for instance. “There’s just a ton of stuff that’s eliminated and the rest has to be simplified in order to fit in the servo,” Bigler says. “To make it work right you have to boil it down to the bare essential components.”

Boil it down, indeed. According to Bigler, an integrated servo contains only about 25% of the parts of a conventional servo system. “The only reason it’s not a quarter of the price is that they’re not manufactured in the same kinds of volumes as traditional servos – yet,” he says.

The Hot Question
One of the most commonly cited concerns with intelligent motors is heat. Motors generate heat, which, as a general rule, shortens the lifetime of electronics. Typical motors are rated for a maximum operating temperature of 155 deg C (311° F), whereas integrated circuits are typically given an upper limit of 70 to 85 deg C (158° F to 185° F).

Detractors say that integrating the electronics into a motor means “derating” it to operate at a lower temperature. That brings up the worst kept secret in motion control, which is that users rarely operate their motors in the upper range.

“We’ll get phone calls here where people will say ‘the motor’s running warm, therefore we need a bigger motor,’” says Mazurkiewicz. The first thing he’ll ask is how hot the motor is running. “They’ll say, ‘Well, I don’t know because I haven’t measured it but I can feel the heat radiating from the motor,’” he recounts. “They’re not pushing that motor hard enough, because if you can put your hand on the motor it’s not running anywhere near the motor’s design limit. I think the human hand gets uncomfortable at 80 deg C, and in general, when the motor winding on a brushless motor is at 155 deg C, the outside case temperature will be running 100 to125 deg C.”

Unless an application truly requires operation at high temperatures -- say, a glass factory or foundry -- temperature is not necessarily going to be an issue. “They wouldn’t be a good choice where there’s certain processes that are very high temperature,” says Bigler. “If you’re bolting the things to an oven and you’re actually using the motors where they’re rated on paper, for example, an integrated servo would not give you the torque margins that a traditional servo with the controls separated would.”

Size Matters
Intertia might be another criterion in deciding whether or not to use an intelligent motor. If you’re designing a robot arm that requires tight control, you want to minimize mass. In such cases, it’s best to put the controls in the base or cabinet rather than having them add weight to the motor.

It also comes down to a question of torque. The servo motor market in general peaks at lower horsepowers in a bell curve that drops off again at very small powers and sizes. Nowhere is this more true than for intelligent motors, which are typically 1 hp or less.

“Every time you double the power in an integrated motor, it becomes four times harder to make,” says Bigler. “It’s a challenge to make higher power integrated motors and the benefits taper off -- when the motor weighs 30 lbs, maybe you’d rather have a controller in the cabinets and figure out which one it is and undo the cable.”

According to Rosser Pryor, president of system integrator Factory Automation Systems Inc. (Atlanta, Georgia), the sweet spot for intelligent motors is a single axis, or even limited coordinated motion over several axes. The problem arises when that coordination becomes more sophisticated.

“We’ve actually used them for coordinated motion, just not tight coordination,” he clarifies. “Some people think coordinated motion means axis A moves, and when it finishes, axis B moves, then when it finishes, axis C moves. These motors can do that famously. What they don’t do well is coordinate the motion between one and the other to draw a circle. I’m not saying it can’t be done. I’m saying that it becomes much more difficult and the performance is not particularly good.”