With the focus on global warming and clean energy, solar power is big business. The market grew 62% in 2007 alone, reaching 2,826 megawatts, according to analyst Solarbuzz. Other agencies predict that the market will triple by 2010. To satisfy mounting demand, manufacturers need to find ways to produce solar panels more rapidly, and that points to automation.

Solar cells generate electricity by converting incident photons into electrical current via the photoelectric effect. They consist of photovoltaic materials such as silicon, patterned with the circuitry to channel the current produced. Historically, solar cells have been fabricated on process tools that each performs a single step, for example patterning or inspection. For each of the five to 15 process steps necessary to convert a silicon wafer into a photovoltaic cell, the tools have typically been loaded by hand and the resultant product inspected manually. With today’s rising demand, however, manufacturers are turning to a more efficient approach. 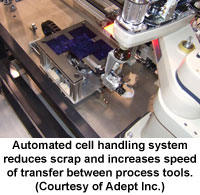 “At the most significant level, the industry needs to drive volume up out of the same factory space,” says John Dulchinos, president and CEO of Adept Technology Inc. (Livermore, California). “They need to drive yield up and scrap down -- all point to the need to automate.”

Two or three decades ago, silicon solar cells consisted of ingots heavy enough that roofs had to be reinforced to carry the load. Today, silicon photovoltaics consist of wafers as thin as 150 um, reducing material costs and increasing conversion efficiency, all of which improves cost performance. That's good news on the competitive front, edging solar power ever closer to the goal of price parity with conventionally produced energy from the power grid. “In the next three to five years, certain parts of the country and certain parts of the world will reach grid parity,” says Dulchinos. “That should be a milestone event and will trigger higher volumes in the future.”

Thin may offer performance advantages but it complicates the manufacturing process. Silicon is brittle, and the thinner the cells, the more easily they break. At a time when manufacturers can’t produce enough product to meet demand, reducing scrap is a simple way to increase yield. That's where motion control can help by automating handling and inspection tasks into a single process step. In addition to minimizing breakage, automation also allows manufacturers to define quality at each step in the process while reducing cost.

It’s a clear goal, but not necessarily simple. Photovoltaic manufacturing lines may not present the 300-piece-per-second throughput challenges of a beverage packaging line, but the performance demands are still stringent. The work envelope can be a meter or two across, yet the line must operate at 1800 to 3600 parts per hour. “When you think of basically picking a solar cell off a conveyor belt, inspecting it, and loading it into a tool across a one meter span in one second, that's a pretty high rate of speed,” Dulchinos observes. 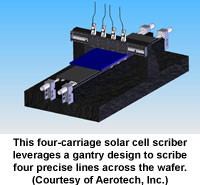 The photovoltaic cells are only semi-oriented on the conveyor belt, which makes machine vision a key part of the overall design. Integrating the vision system with the motion system allows the machine to identify the cells as they arrive on a conveyor belt moving at several inches per second and communicate their position information to the controller. The controller combines this information with encoder data from the conveyor to allow a pick-and-place unit to capture the cells on the fly and transfer them to the tool or inspection station with a positional accuracy of 50 to 100 um. “It requires a tightly coupled imaging system and a tightly coupled servo system that’s able to move the mechanism and synchronize it with the moving belt,” says Dulchinos. “It's a very complicated application.”

Adept uses smart drives in distributed control architecture, combined with a PowerPC-based motion controller that closes the servo loop at 8 kHz. A .NET application on top simplifies programming and operation. And in an industry hiring new workers seemingly every week, user friendliness is a good thing.

Thin film photovoltaics
Of course, silicon is not the only photovoltaic entry. Many promising technologies are based on thin-film approaches. Thin-film modules most commonly consist of three layers, all of which typically require scribing to isolate elements. This is done using a gantry type configuration driven by mechanical actuators or linear motors. The platform might carry a 600 mm x 1200 mm part beneath a mechanical scriber or a laser that would remove the layers.

Throughput is always a concern - the systems operate at 1 to 3 m/s - but accuracy is also an issue. Among the challenges are supplying a stable velocity, rapid turnaround, and quick response in the case of line stoppage. Linear actuators like belts and ball screws offer options, but linear motors are most often used. Although their cost is higher, they offer greater accuracy and flexibility.

A thin film process tool may have as many as ten scribing heads that need to function independently. “This is where the linear motors become very helpful,” says Al Ciez, division manager of the positioning systems division of Aerotech Inc. (Pittsburgh, Pennsylvania). A linear motor with a single magnet track can have multiple coils, each assigned to a different scribe head. “Linear motors provide high speed but this approach dramatically increases system throughput,” says Ciez. “You can gang all these heads on one common rail system and be able to articulate where each goes individually in a package that’s basically the same size as the scribing head itself.” 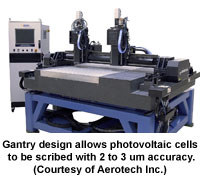 For these types of applications, bearing design is critical. “The scribe lines have to be very straight and very parallel,” says Ciez. “Mechanical bearings have to be true in order to rule lines across the entire panel to 2 um or 3 um accuracy.”

Fabrication typically takes place in a class 10,000 cleanroom environment. The scribing process itself generates particles, in addition to those produced by the motion system’s mechanical bearings or cables running in cable tracks. For these high throughput systems, a bigger concern is thermal management, typically tackled by air cooling or water cooling.

A photovoltaic fabrication line faces more than just challenging performance specs. Duty cycles typically hover near 100%. “It all comes down to getting as many panels done as quickly as you can,” says John Lindell, product manager in Aerotech’s Test and Measurement Group. “The machine has to run 24/7 because the real dollars are made with those machines [scribing] panels. A lot of companies give us requirements for dynamic straightness and those kinds of things but there is always the question of the uptime of the machine and throughput. They all want the cost per panel to go down.”

Systems level design
Beyond component concerns, there are system-level considerations. Networking is a key requirement in any high-throughput manufacturing environment. It’s not just a matter of providing shop floor data to the top floor or simplifying maintenance. Networking automated inspection stations, for example, allows the system to provide feedback to the process tools to enhance performance and increase yield. “We can look at printing on the solar cell and identify whether it's a trend in the printing and whether it's shifting over a period of time,” says Dulchinos. “If we have the ability to communicate data upstream to the process tool that may have created the defect, we really provide a very strong process control tool.”

At the end of fabrication, solar devices are classed by efficiency; the more efficient the device, the higher the price. That makes reworking pieces practical, but only to a point. If found soon enough, certain defects can be repaired with only a few extra steps, which makes salvaging the piece economical. If the same piece made it all the way to the end of the line, instead, the number of additional processes required to rework it would be cost prohibitive. Automated inspection on a networked system can catch errors early, allowing manufacturers to salvage product that otherwise they would have had to scrap. 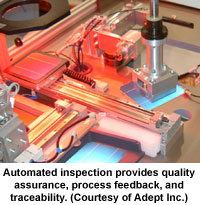 Part of cost control is integrating safety into the system. Safety is, of course, primarily concerned with ensuring the health of staff, but it also plays a role in minimizing scrap, reducing maintenance requirements, and cutting downtime. “There’s the process portion of safety, which isn't necessarily just protecting people but protecting the final product,” says Lindell. “In the event that an operator hits the e-stop, how do you decelerate the product in a safe fashion so that you don't have breakage?” The solution varies by application but the key is to integrate safety from the beginning. “A lot of it involves handling, loading, and unloading, as well as acceleration and deceleration. It's always in the forefront of our thinking,” says Lindell. “Nobody wants their product to be damaged.”

Despite the number of years it has been around, the photovoltaic industry is far from mature. With all the market forces in play, it exists in a state of near constant flux, creating perhaps the biggest challenge to suppliers. “Things are evolving very quickly,” says Dulchinos. “There is a lot of variability in processes right now. In inspection for silicon-based solar cells, we've got a list of 50 defects that they're looking for but we find that list is growing 20% every six months. The industry just doesn’t have enough high volume production history with these processes to have driven them to a high degree of efficiency, so dealing with that is a challenge.”

Challenges aside, green power is the growth industry of the future. Meeting ever growing demand is key, however. Motion control provides the solution in an efficient, modular technology that can allow factories to future proof their operations while minimizing energy consumption. And that’s a powerful solution.

With Smart MechatroniX, Bosch Rexroth offers new solutions for the Factory of the Future

The Biggest Trend in Controls is Choice