In the beginning, automobiles were fairly simple mechanical systems that performed a fairly simple mechanical task - transporting people, creatures, and goods from one place to another. Today, the task remains simple, but even low-end cars boast sophisticated features, powered, in part, by motion control. For motor and subsystem manufacturers, automotive applications present a list of conflicting demands. "Motors have to be small, robust, last forever, and cost nothing," says Peter Jones, Chief Technology Officer at Juken Swiss Technology Ltd.

Although many cars feature digital displays, the gold standard remains the analog dial. If you’ve got a rotary speedometer or tachometer, chances are good that you’ve got a stepper motor or two buried behind your instrument panel. Driven by the signal from the vehicle speed sensor (VSS) that monitors the crankshaft, stepper motors mesh with the gears on the instrument needle to turn it to the appropriate position. Typical VSS designs feature a toothed metal wheel attached to the crankshaft that modulates a magnetic field. The faster the wheel turns the higher frequency of the signal, which gets processed into absolute speed. 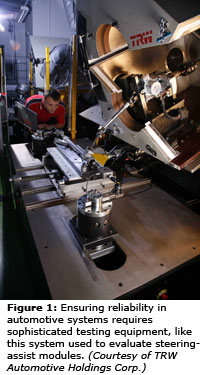 Stepper motors operate open loop and yet produce reliable motion - you command a step, you get a step. “The micro-stepping is very precise," says JST’s Jones. "You drive the motor against the stop, and then you know there are 4320 micro-steps to the stop on the other side.” The compact devices provide the torque required without the need for a gearbox. That's important for dashboard applications, where space is always at a premium.

Of course, instruments need to respond at night as well as during the day. In early designs, a trio of LEDs mounted at the base of the indicator shaft illuminated the needle.  At JST, designers took a different tack, designing a transparent-shaft stepper motor that cuts the demand for LEDs down to a single emitter. LEDs cost roughly $.20 apiece, so eliminating two of them reduces the overall cost of the assembly by $.40. That may not sound like much until you compare it to the cost of the stepper motor itself which is around $1. In a cost-driven industry, every penny counts.

The polymer indicator shaft transmits light up to the needle, but it also diffuses it out to the sides. That creates stray light that could impair dashboard readability. In response, the JST team surrounded the shaft with a thin steel housing. Not only does it block unwanted light transmission, it results in a more robust component. On its own, the plastic is not strong enough to stand up to disassembly. As a result, components taken apart for maintenance would have to be discarded. With the steel sleeve, that is no longer a problem.

The motors tend to be small - less than 10 mm high and around 30 mm in diameter. Operating off around 20 mA, they generate about 1.5 mNm. Reliability is essential in automotive applications, requiring comprehensive testing (see figure 1). Perhaps the biggest challenge comes from shock and vibration. To ensure that the motors can tolerate the abuse, JST tests them to 6G of vibration, as well as shock tests of 20G. 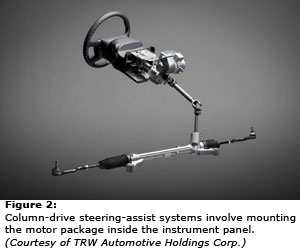 A steering-assist system consists of a motor, drive and control electronics, and a gearbox. Assisted steering can roughly be divided into two classes: column-drive designs and rack-drive designs. Column-drive systems originated with more compact vehicles, which require less torque to steer, and thus, smaller motors. As a result, the motor package can be situated inside the instrument panel, behind the instrument cluster (see figure 2). The location protects the motors and electronics from temperature extremes and corrosives like salt spray, but the confined space limits the size of devices that can be used.

Larger vehicles like SUVs require more muscle, which means that the motors are too large to fit in the instrument panel. Instead, the rack-drive package is banished to the engine compartment, a punishing environment at the best of times (see figure 3). “You're typically close to the catalytic converter so the heat is going to be extraordinary," says Cregeur. "Often times, applications have requirements for heat shields and deflectors to keep some of that heat away from the electronics. A column drive system that's protected in the passenger compartment doesn't have to be sealed from salt spray and anti-freeze and all the nasty stuff that happens in the engine compartment. It's a much friendlier environment.” 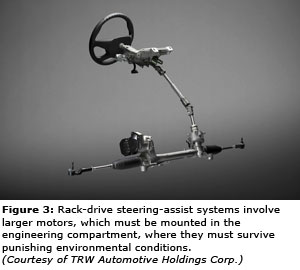 Steering assist subsystems require sophisticated control to ensure safety and effective operation. "We use a hierarchical system with a sequential controls sequence," says Cregeur. "We drive the output of our system based on current, so we first apply the lowest level algorithms to determine what the current needs to be in the motor to get the proper output torque. Then on top of that, we nest input commands from the driver or from stimulus from the road.” The idea is to filter out instantaneous spikes to the system that might be triggered by running over a pothole, for example, to prevent it from rippling back up to the driver's hands.

Look, Ma, No Hands
In the 1990s, technologists predicted a rapid shift to automated highways with vehicles that operated themselves. Fifteen years later, self-driving vehicles have yet to materialize. That said, several models on the market today do boast automated parking features, or systems that use radar and cameras to not only warn of lane departures but apply a small amount of torque to the steering column to guide the vehicle back between the markings. A more advanced form, called a lane guide, actually constrains the vehicle to an imaginary trough in the center of the lane. In theory, the system could allow a driver to travel hands-free.

The question is how to implement this sort of system safely. From the standpoint of steering only, TRW’s approach is an arbitrator in the control algorithm that assesses the current loop, the input demand, and the torque overlay to determine the accuracy of the combined command sequence. "You have to have an ultimate error check that says, ‘This is a sensible answer,’" says Cregeur. "You can do that in a couple of ways: by having a redundant microprocessor run algorithms and do a redundant majority vote on it, or using a smart [application-specific integrated circuit] to do a watchdog function. You have to have some sort of a watchdog in there.” Adding in brakes and sensors, and what TRW calls a driver-assist program, requires additional safeguards. "There is always what we call an executive module that performs a calculation and as the ultimate controller says, ‘Okay, looking at what's coming through the radar and applying all the safeguards, this is really the signal I want to send to the steering, the signal I want to send to the braking,'” he adds.

Despite the progress that has been made, our romance with the driving experience and the open road doesn't appear in danger anytime soon. The problem is not one of technology so much as logistics and cost. “Can drive by wire be done? Yes,” says Cregeur. “Is it cost-effective? No, because of the redundancies that you would have to have. From a size, weight, and cost standpoint it's not practical yet. Doing steer by wire, brake by wire in a 12 V system is probably a bridge too far.” That said, as the technologies change, so do the possibilities. "With hybrids and things like that, you’ve got a lot more on more power," he says. “I think the market will get to drive by wire in time.”