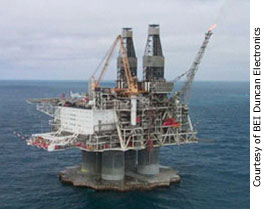 Energy. It’s the word on everybody’s lips. Oil literally fuels the economy and drilling for petroleum today is a sophisticated process that maximizes efficiency and optimizes results. Well depths can range to tens of thousands of feet, with temperatures often rising well beyond anything seen in an industrial environment. There’s a role for motion control to play in this market; let’s take a closer look.

In a typical well, a rotary diamond bit drills through the rock. A mixture of clay, water, and chemicals called mud is pumped into the hole to both cool the bit and carry debris to the surface; there, the mud is filtered before being recirculated. In the old days, bores were strictly vertical; no more -- today bores can shift laterally as needed to better access subsurface oil-bearing formations. Measurement while drilling (MWD) tracks the physical characteristics of the drilling process, monitoring bore pitch, straightness, and so on. Logging while drilling (LWD) provides data about the medium being drilled through, tracking rock types, geologic formations, and the presence of natural gas, water, oil, and other types of materials.

In one common MWD/LWD method, tools call pulsers send localized pressure waves up through the mud in the borehole, which changes the properties of the waves. At the surface, variations in the wave properties can be analyzed to yield data on the materials below. The pressure waves are generated at the level of the drill head by servo-motor-driven valves that open and close to intermittently block and admit mud.

The environment presents a singular challenge. At levels of 10,000 or 20,000 feet below the earth's surface, temperatures can hover near 200°C. The drilling process itself generates substantial, ongoing levels of shock and vibration and pressure. Add to that stringent reliability and lifetime requirements, and you've got a serious engineering challenge.

Heating Up
Thermal management is always a consideration in engineering, but it goes in spades for downhole applications. Designing a motor to operate at the typical industrial maximum of 85 deg C is a far cry from designing one to operate at 150 to 200 deg C. “They're drilling deeper, they're expecting more in the way of reliability, they're putting the motors into conditions that they haven't really been put into in the past,” says Walter Smith, senior applications engineer, motor products at BEI Kimco Magnetics (Vista, California), which supplies servo motors for pulsers. “There's always a push in the industry to get the temperature capabilities higher and higher.” Such temperatures restrict the choice of technologies and present a challenge to electronics, in particular. The best approach to take depends on who you talk to, Smith says. “Some schools of thought feel that you should expose the components to those temperatures whereas others feel that isolating the components from those temperatures is really the best way to go.”

Thermal management really starts at the design level, with choice of components. The BEI Kimco team avoids using Hall sensors for commutation, for example, and prefers resolvers rather than encoders for feedback. Adhesives, varnishes, and lubricants have to be selected on the basis of survivability in high-temperature environments. It's not a question of heat conductivity so much as robustness, the ability of the material to maintain a bond with the substrate. On the plus side, proper application of varnish can assist with heat transfer. The magnet material must also be chosen for high-temperature stability; typically rare-earth magnets are used and neodymium avoided.

Speaking of heat transfer, one thermal management mechanism is a byproduct of the solution to a different problem. In addition to heat, the pulsers are also exposed to significant pressures from the surroundings. To help equalize pressure, components are immersed in oil. The approach helps stabilize temperature because the large thermal mass of the oil acts as a heatsink. Of course, the oil immersion adds another level of complexity -- the epoxy adhesive that bonds the magnet must be one that does not break down in oil.

“Most of these wireline tools are basically chasing the drill,” says Smith. “They usually have to fit into a diameter of around 1.5 inches. Obviously, as things get smaller, they get more difficult.”

Properly sizing the motor for the application can be a balancing act. For a low-efficiency motor, the larger size might still generate heat but its thermal resistance (deg C/W) would be lower. A smaller, higher efficiency motor would present a greater thermal resistance. Here, the heatsinking capabilities of the surrounding oil provide a significant advantage, mitigating that value.

Not surprisingly, insulation is also a factor. In general, the motors tend to operate at higher voltages with lower currents, so the insulation needs to be designed appropriately. “The higher the voltage, the lower the current you will need to go through the long line. That will reduce the resistance loss along the line and increase the overall efficiency,” says Du. “With a higher voltage, you have to pay special attention to the motor insulation system, make sure that, dielectricly speaking, the motor is strong enough under the oil conditions.”

Simply Shocking
The downhole environment can be filled with shock and vibration. Some tools are lowered into the borehole on their own; others are attached to the drill head. “The challenge of temperature and shock and vibration are certainly something that we don't see in normal applications,” says John Pindroh, business development manager at BEI Duncan Electronics (Irvine, California), which produces a potentiometric devices for formation-logging sensors that must operate at temperatures as high as 300 deg C. “[The probes] that are on the drilling head are obviously going to see a lot of that shock and vibration. We have a combination of conductive plastics and contact materials to help us endure those. In both cases, the temperatures are extremely high. We have a rather unique blend of materials that allows us to tolerate those temperatures for an infinite amount of time.”

Which brings up the question of lifetime and reliability. Downtime is anathema to any industrial application, but in the case of oil drilling, which often reaches to depths of several miles, tool failure quite simply cannot be tolerated. Product warrantees run for about a year, typically with rigorous maintenance schedules. In certain higher temperature jobs, users prefer to discard the devices after a single use rather than taking the chance of problems once the device is downhole. “It's so expensive to pull it back out, they don't want the risk of failure,” says Jerry Brierton, national sales manager at BEI Kimco.  In all cases, lifetime is a fundamental concern of the design team. Of course, engineering hours and exotic materials can drive the costs to buy an order of magnitude or more compared to a standard industrial device.

Cost Conscious
What about that cost? When oil hit record prices in the summer of 2008, wells that had been shut down because the cost of oil recovery outweighed the returns suddenly looked much more appealing. More recent economic pressures may have brought oil prices back down to 2006 levels, but they’re unlikely to stay there, especially with peak oil looming. And oil companies have to take the long view. “Right now we have not seen a retrenchment in the industry, even as a result of the latest economic news,” says Craig Resnick, research director at ARC Advisory Group (Dedham, Massachusetts). “These companies are continuing to invest. They can't have manic-depressive decision-making. They can't say one day we’re in, the next day we’re out. They have to set a vision and look to it.”

Tools developed and shelved because of cost issues are being brought to the forefront again. “From the standpoint of cost, it's become much more feasible than it had in years past,” says Smith.

Opportunities for motion control are emerging even outside of downhole applications. Increasingly, the same companies producing energy are also working to conserve it. “This is where motion control comes into play,” says Resnick, pointing to the use of variable speed drives on pumps and fans on offshore drilling platforms to minimize power usage. “You're able to save a third of the energy that you’re using on an offshore platform, making it a lot easier for that platform to have energy available for other functions. Applying variable speed drives to fixed-speed devices provides an energy savings and in many cases offers ROI of six months to a year."

In other words, there are opportunities to be had in the oil and gas industry. The perennial danger in promising markets, however, can be that the bulk of the market may already be subscribed. Many in the motion control industry are eyeing the oil and gas sector, but should they be if they do not already have a foothold? “You do have many large global suppliers that can satisfy, say, 80% of all the applications that are available,” says Resnick. “The thing is that the major suppliers don’t want to build niche products. That’s where entrepreneurs have the opportunity to grow in all the automation spaces and certainly in the motion space because you can have smaller motion control companies that do some things very well.”

The overall thinking seems to be that even with a combo of solar and wind farms, the petroleum market will remain. So figure out what your company does well, find an underserved niche, and develop a solution that will meet customer needs.