Hypothesis, prediction, experimental verification, theory. The scientific method is the foundation of science, and repeatability lies at its core. It makes sense, then, that automation is a key part of the infrastructure of most laboratories. While the laboratory may not present the environmental challenges of the industrial environment - heat, dust, contamination, to name a few - scientific applications present challenges of their own.

The first difficulty is the lack of consistency.  Laboratory applications vary widely, from simple pick-and-place or synchronization type tasks to the high-performance operations of “big science” installations like particle accelerators.  Low-end applications may consist of a handful of axes performing unsynchronized or minimally synchronized motion.  High-end applications may not only require tight synchronization among dozens of axes but synchronization of motion with ancillary functions like data gathering or vision.  At the European Organization for Nuclear Research (CERN), for example, 128 separate controllers adjust the collimators that maintain the path of the circulating atoms in the particle accelerator. 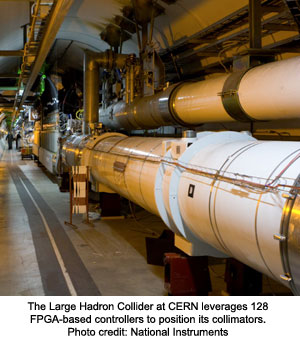 Clearly, the accuracy and repeatability required for atomic physics are quite different than those necessary to position an optic in a spectrometer, yet both are scientific applications.  In the case of industrial and OEM applications, vendors may have to customize for a range of applications, but the specifications tend to be more similar.  It is also far more practical to invest non-repeatable engineering hours in a product that may then be supplied in volumes of thousands.  "Trying to come up with a custom build is not very cost effective if you're talking about one application," says Christian Fritz, Product Manager for Motion and Mechatronics at National Instruments (Austin, Texas).  "That's why motion control vendors come up with products that support customization."

One trend that Fritz points to is the use of FPGAs to create custom motion controllers. The approach allows vendors to implement functionalities that cover the standard use cases for motion applications while giving the customers the freedom to implement custom control algorithms on high performance hardware components.  “One nice thing about FPGAs is the possibility to reconfigure them,” he says.  “Customers not only build one-of-a-kind systems, they want to reuse existing hardware and software when they come up with new experiments.  With FPGA-based systems, you can reconfigure your motion control algorithm and the I/O as often as you want to just by applying software to them.  They give you a lot of flexibility to reconfigure them and you can upgrade them as needed.”

There is, however, a price.  "In those types of systems the critical element is the software so the customer needs to have powerful software development tools to create motion control algorithms.  The burden is on the vendor to come up with tools that offer ease-of-use and at the same time flexibility and extensibility to those kinds of technology.”

Choosing Components
At a component level, the demands of the application define the technology to use.  Stepper motors frequently fulfill needs in low-end tasks.  High-end applications may require rotary servo motors or even linear servo motors, frequently with sophisticated optical feedback loops.  A mid-level application might work well with brushed DC motors.  Even here, there are different schools of thought, however.  “There’s no cost advantage [to steppers],” points out William Grenier, President and General Manager at National Aperture (Salem, New Hampshire), which supplies both. “In my experience, the servo motor really has a lot more torque and a lot more power.” Choosing a servo motor provides flexibility to address experiments yet to be developed.

Accuracy and repeatability can range from millimeters to nanometers.  Piezoelectric positioners can provide nanoscale accuracies and resolutions, but with limited travel.  Linear motors or rotary motors coupled with ball screws increase travel distance but also error. In cases requiring high resolution with long travel, the best approach may be a hybrid system.  One solution might be to combine a long-travel micro positioner with a 200-µm-travel nano positioner.

That might address the overall positioning requirements but it does present a control challenge.  A somewhat simpler alternative might be to go with an automated/manual hybrid.  "A lot of times biochemists want to look at a specimen under a high-powered microscope,” says Grenier.  “The challenge has always been that you can program the stage to move to a certain point but then there is always a fine-tuned motion that you want to do after that.”  Their solution is an additional manually adjustable encoder wheel that allows the user to make fine tweaks while looking at the sample through the microscope.

Not all scientific applications involve loads as light as microscope slides.  In cases that require moving heavier objects, a gearbox can be used to generate the necessary torque.  There are tradeoffs, though. Speed is one, but adding gearing can also impact system performance.  Anytime a gearbox is involved, there is the possibility of backlash. To some extent, the way the motion is accessed can be a help.  "Typically in an application where they would want to move in fairly fast and then stop and tweak from there, you’re pretty much always going in the same direction, so most of the backlash is taken out," says Grenier.  To minimize any possible effect, however, system designers can preload the gearbox, or use a so-called zero backlash design.  An alternative would be a damping element like an anti-backlash nut. In a well-characterized system, designers can also compensate for backlash via software, Grenier notes.

For the most demanding applications, perhaps the best solution is an output encoder.  “With a motor-mounted encoder you don't exactly know where you are because of the errors of the gear, the screw, backlash," says Beda Espinoza, Senior Product Marketing Manager of motion products at Newport Corp. (Irvine, California).  “An output encoder is basically attached to the moving part of the stage.  The output encoder tells you exactly where the object is relative to an axis."

Not all scientific applications consist of laboratory or big science experiments.  OEMs build everything from chemical analysis equipment to spectrometers.  Not surprisingly, they bring their own challenges to the job.  “More likely the OEMs will want something different, whether it's longer travel or better flatness," says Espinoza.  "It's at least going to be higher performance and the biggest part of that is packaging it to fit the stage within their equipment, and so it is a challenge providing everything in one package."

Materials can also be a factor in ensuring performance in the face of temperature swings.  It seems a bit non-intuitive, but thermal stabilization can be an issue even in an air-conditioned laboratory.  As a building heats up and personnel come and go during the day, temperatures may vacillate 5 or 10 degrees.  For experiments that can last hours or even days, it is important to ensure that positioning remains accurate.  Use of low-expansion housings can help address this.  Avoiding bimetallic fixtures is also helpful.

“The ruggedness factor is the demand for high-end industrial applications but if we talk about scientific applications, ruggedness not only means temperature range and shock and vibration survival but also reliability,” says Fritz.  Indeed, robustness is always going to be important, whether in a university laboratory that's going to want to use equipment for a decade or an OEM building an analytical instrument with a five-year guarantee.

Scientific applications may not provide the mass volumes of industrial solutions, but they represent a solid niche market that tends to be less subject to the vagaries of the economy.  Vendors can use it as a driver to produce ever better products, often while recruiting student users who may become loyal customers in future.  The experimental data is in:  Motion control has an important role to play in science.