Automobiles are classic symbols of motion. It is fitting, then, that motion control plays an important role in the manufacture, test, and operation of vehicles. Particularly in the midst of this challenging economic period, motion control provides economies of operation that allow companies to save big.

During the development phase, vehicles and subsystems must be designed and evaluated. Here, motion control can help. In particular, specialty sensors like roll-over and stability systems based on gyroscopes and accelerometers require high levels of precision from their testing systems. In other applications, motion control can provide force feedback to ensure that the system has the type of feel that drivers expect, for example in electronic shifters. Alternately, testing devices like the buttons on a radio requires precisely calibrated pressures - too hard, and the instrument can be damaged, too soft, and the pressure doesn't register. Motion control can supply the solution reliably and repeatably. 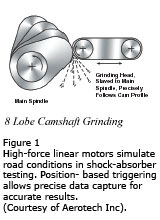 R&D applications like seatbelt testing require high-speed motion over fairly a long stroke to apply multiple Gs of force. Electronic shafting provides a more flexible, cleaner solution than hydraulics. A more recent trend for these applications has been a move away from rotary motors with crank pins and toward linear motors. “They can get to very high speeds in a  very short distance, rather than having to be feet long in order to get up to speed,” says Brian Cox, application engineer at Aerotech Inc. “Stroke length and the overall footprint of the machine become much smaller.”

To characterize spring and shock-absorber performance, engineers often need to capture data at very precise points along the line of travel (see figure 1). In theory, this equates to acquiring data at exact intervals. If the motion system suffers from any velocity instability, however, data acquisition keyed to time of travel can introduce error. A good solution is to use a linear motor and trigger data based on actual position feedback using a specialized controller function, instead. Such an approach can dramatically reduce error. “We’re getting sub-microsecond latencies between when the axis is actually at a position and when the output changes state,” says Cox. “Instead of moving to a position and stopping, settling, and capturing data, then moving to another position and stopping, settling, capturing data, you can do data capture on the fly.”

By combining such sophisticated controllers with linear motors, test engineers get significantly greater degrees of freedom in evaluating components. "With a rotary motor and a crank pin, you've got a very fixed motion that you can produce and many complicated motions that you really can't,” he observes. “Linear motors can generate a seemingly arbitrary motion profile so that they can really see what the shocks are doing."

Manufacturing Models
The automotive industry is rife with robotic arms and automated manufacturing. Many tasks, such as moving engine blocks and positioning chassis simply require horsepower. Increasingly, though, that horsepower needs to be complemented by the precision and flexibility of electronic shafting. As costs drop, the trend is toward putting servo motors even on positional actuators versus motion-control actuators. Servo motors don't suffer the inertial effects of AC motors, for example, because their deceleration and position can be programmed very accurately.

In brute-force, load-positioning applications, designers must balance speed, stroke length, load and lifetime, making trade offs for top performance while including safety margins to guard against lead screws buckling. As far as torque goes, adjusting the pitch of the screw to modify the amount of rotation required to generate motion provides a key degree of design freedom. As with adjusting the gearing, modifying the pitch of the lead screw can allow a high-speed, medium-torque 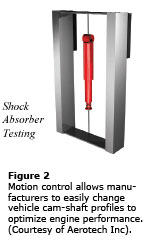 motor to accomplish the motion tasks of a higher-torque device. The trade-off is friction, but when the actuator is a roller screw or a ballscrew, the amount of added friction becomes nominal. Depending on the situation, the cost savings realized by switching to a lower-torque motor will outweigh the small decrease in efficiency.

Adjusting the cam shaft in a vehicle can improve engine performance and fuel economy. There was a time such changes meant swapping out or adjusting cams and gears on the machine itself. “You had to actually change the mechanics and now a lot of it is done through software and servo motors,” says Cox. Motion control provides manufacturers with the flexibility they need to optimize the vehicle cam shaft for each engine type (see figure 2). “It’s just a matter of changing some things in the program or the controller. It makes changeovers a lot easier than when you had master mechanical systems.”

Perhaps the most common automotive manufacturing applications use motion control for proof tests like determining that a seatbelt can tolerate a certain load or end-of-line testing, like ensuring that a door opens properly. Testing applications require higher-speed actuators with high duty cycle and repeatability, requiring long lifetime and consistent performance over that lifetime.

Not surprisingly, contamination becomes an issue in manufacturing environments. Linear motors can be applied successfully provided that they can be properly protected. Blowing air through the forcer coils performs a dual purpose, blocking contamination via positive pressure while removing heat.  "Air purges and paying close attention to shielding, guarding, and things like that really help but we do try to recommend that the users get in there and get the motors cleaned and lubricated on a reasonably regular schedule because it's certainly a lot cheaper to do that than to have to repair or replace the motor,” Cox says.

Automated Vehicles
In the 1990s, the concept of automated vehicles and highways was all the rage. Companies and organizations built, tested, and demonstrated them, predicting actual deployment within a horizon of a decade or so. Those predictions haven’t played out, perhaps due as much to the relationships that drivers have with their vehicles and the open road as to economics. The financial aspect shouldn't be ignored, however. The levels of redundancy and robustness required to ensure safety of automated systems have produced significant delays.

SKF Actuation Systems produced an automated concept car called Filo in the early 2000s. The vehicle made headlines but has yet to come to market. “There was a lot of interest but no money to industrialize the solution,” says Gianluca Oberto, Manager & Business Development Manager for the Drive-By-Wire business unit. “The cost to fully validate the different applications and bring the vehicle to production caused some delays. The production of Steer-by-Wire and Brake-by-Wire systems was forecast for delay of two or three years, which means that in the beginning of 2000, we were aiming at 2005 or 2006 to introduce this system in a car, but the introduction has been postponed to 2010 and now 2015, and so on.”

Rather than giving up on the idea, SKF scaled back its ambitions and took aim at a less glamorous but more promising market: off-road vehicles such as agricultural tractors and construction equipment like asphalt rollers, graders, and excavators. Such vehicles tend to drive at significantly slower speeds, typically with a smaller set of better-trained drivers, which simplifies some of the safety aspects of system qualification.

The company developed an electronic parking brake for off-road vehicles that will be installed in more than 10,000 tractors over 2009 to 2010. The EPB system provides two main functions, one for the parking brake and the other for the emergency brake. The system integrates a smart electromechanical actuator that interfaces electrically with the vehicle network via CANbus, and mechanically via a Bowden cable connected to the tractor transmission (see figure 3).

One obvious challenge for these systems is contamination by dust, fertilizer chemicals, and moisture. The SKF team developed an IP 67-rated sealed actuator that can survive immersion in up to 1 m of water. It is also vibration and shock resistant. "We have tested it at up to 25G without any problems,” says Oberto. “It's designed to be robust for the application.”

Perhaps the most important aspect of this kind of product is safety. The group designed the unit around microcontrollers. The main microprocessor runs normal operations, including functioning of the actuator-based parking brake. A second, safety microcontroller provides redundancy; in the event of failure of the primary microprocessor, the safety unit takes over.

The company also manufactures electronic steering input systems that provide passive feedback to the driver (see figure 4). Because vehicles such as asphalt rollers are so heavy and difficult to turn, they require hydraulic steering. The drivers still need to have the touch of the highway, however. The SKF system provides a resistant torque that allows the driver to feel what is happening between the vehicle and the asphalt without the need for hydraulics within the operator cabin. Integrated sensors detect the position of the steering wheel and provide feedback through the electromagnetic brake system, which applies a clamping force that gets converted into resistant torque. SKF has sold the system into the construction equipment, simulators and marine markets, and is currently making plans to move into the forklift market.