Motion control has long played an important role in the packaging of consumer items like food/beverage and pharmaceuticals. Today, falling prices and rising capabilities are propelling the technology further along in the packaging flow, into tasks such as palletizing that have previously been the province of pneumatics and hydraulics, or even AC and DC brushed motors. 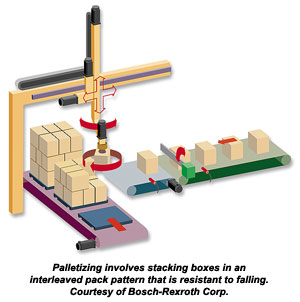 Palletizing involves stacking boxes or cases on pallets for transportation by fork lifts. One of the challenges of palletizing is weaving together the cartons on the pallet so that they form a stable, interleaved structure rather than a series of self-contained, poker-chip-like stacks that are easily tipped over. Clearly, the pack pattern differs from product to product. The flexibility offered by the programmability of electronic motion control allows manufacturers to palletize effectively even if they change SKUs every day -- or every hour.

Such nimbleness makes motion control a benefit to machine builders who are looking to differentiate their offerings. “There are a lot of custom builders who build one machine that does a particular product, but these machines need to be flexible enough for the different products that they are packaging in the end plant,” says Rich Braga, regional sales manager at Tolomatic Inc. (Hamel, Minnesota). “Now, OEMs can build a machine that's easily programmable to change on the fly. They can go from packaging a small box to a bigger box, a heavier product to a lighter product, change cycle speeds on the machine, all that stuff that you can’t do easily with air or hydraulic systems. It's just so much easier to do it with a motion control solution.”

“In the area of beverage packaging, we’re seeing more and more servos lately in cartoning and palletizing," says Dan Throne, food and packaging business manager at Bosch Rexroth Corp. (Hoffman Estates, Illinois). "They’re starting to become more and more automated, because the configurations of the beverage cartons have changed so significantly."

Forget about the classic six pack. These days, drinks often come in “fridge packs” - dispenser cartons designed specifically for refrigerator shelves. They get packaged in four packs, 12 packs, even 18 and 30 packs. The fridge packs are in turn packaged singly, doubly, and in different shapes and sizes, all of which need to be palletized with different pack patterns. In addition, the case packers and palletizers need to be able to accommodate unique packaging requirements from major chain retailers such as Wal-Mart and Costco.

Technology Trends that Count
According to Throne, a number of new trends make motion control appealing for palletizing, including networking, integrated components, and embedding robotics capabilities into controls. “Automated robotic palletizers require higher speed, higher throughput, better control of the robot or gantry that's doing the palletization, and better handling of the product,” he says.

He points to the emergence of the IEC 61131 standard as a big driver, providing as it does a standardized language for programmable logic controllers and their peripherals. “What’s neat about IEC 61131 is that robotic function blocks can be used within it, which means that you no longer need to use a specialized robot controller to do palletizing,” he says. “We’ve seen a trend emerging of integrating robotic functions into motion and logic controllers.”

“End customers and OEMs want to see IEC language used because they have already a familiarity with ladder logic, for example,” says Throne. “They no longer want to send someone for specialized robot controller training and have to buy software and have that independent knowledge of the robot.”

Networking Advantages
Ultimately, it’s all about making life easier for the customer. Networking is another way to do that. Networking allows machine-to-machine coordination and data exchange that improves throughput while reducing maintenance costs. Imagine, for example, that we are installing a pair of palletizers at Joe’s Lumber. Each has its own HMI application for the touchscreen that runs it, and each application is based on four variables, such as machine speed, product, RFID label and stack pattern on the pallet.

Ethernet allows the two palletizers to communicate so that if one of them goes down, product can be diverted to the other. This allows the backup machine to pick up where the other left off, using the same variables.

Better Price Points
The falling cost of motion control technology has also had a hand in penetration of the palletizing market. Pneumatic and hydraulic solutions may have their drawbacks, but ten or even five years ago they still offered a substantial cost advantage over electronic servo systems. Now, the value proposition is getting easier to argue, Braga says, particularly for controls.

“They’re smaller, have more I/O, and are easier to program for the OEM and the end user,” he says. “If you’re building a packaging machine or a palletizing machine of some sort, [the shift] has made it easier to transition from air or hydraulic to motion control. Even though the cost is higher, it's not as significant a jump as it once might have been.” 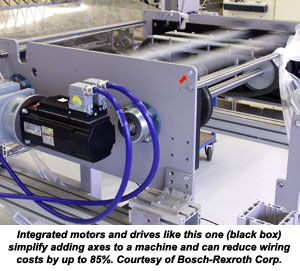 Eliminating the pneumatics and hydraulics can potentially remove the need for compressors, pumps and filters, not to mention leaks. Motion control technology becomes even more appealing in the case of applications such as food packaging, which require clean solutions and can't tolerate hydraulic fluid, for example.

Meanwhile, the new smart components add value for users who have limited motion control knowledge or for whom downtime exacts a hefty premium. Integrated motors with onboard drives can not only reduce footprint but reduce the space required in the electronics cabinet by as much as 70%, Throne says.

The single most important trend in motion control in terms of market penetration may well be its increasing accessibility. “It's getting easier to use, and that's what people want,” Braga notes. These machines are going to plants and maintenance people at these plants want to be able to quickly figure out how to program it, so ease of use is a priority.”

So far, we’ve focused on electronic solutions, but sometimes motion control can bring electronic flexibility to pneumatics or hydraulics, for example in a system built by Intelligent Motion Systems Inc. (Marlborough, Connecticut). “The stepper would present the gate or the stop so that when the air cylinder fired, it would only go a certain distance and bump into that gate,” says application engineering manager Bob Parente. “The ability to adjust from package size to package size, even though it was still using air, was better controlled by having this type of gate to prevent the motion from going past a certain point.”

No matter how they’re used, it seems, motion control systems have benefits to offer. When you add increased programmability, embedded robotics functionality, networked systems and distributed architectures, plus integrated motor/drive systems that yield smaller, higher performance machines at a steadily falling price, the value proposition is hard to ignore, Throne says. “It’s a perfect example of technology moving us all forward and making us more competitive in the global marketplace.”