Life sciences carry enormous potential to improve the lives of people around the world. In a twist both ironic and unsurprising, the discipline focused on life benefits enormously from the capabilities offered by the inanimate technology of motion control. Whether it’s DNA analysis for forensics and pharmacology, or chip-level analysis of molecules and proteins, life sciences applications present both opportunity and challenges for motion control.

The first question to ask is whether a process can be automated, the second, whether the process should be automated. With proper design, motion control can bring big benefits to laboratory processes - not just higher throughput but greater consistency, reduced error, and improved quality. "In the case of biotech, each run is a little mini science experiment, so we want the repeatability and the precision that can be yielded with an automated system,” says Weston Griffin, Mechatronics Engineer at GE Global Research.

“Customers are looking to integrate multiple functions and to be able to really work with the extraction, processing, and movement of the samples,” agrees Gareth Ellis, Global Product Manager, Life Sciences, GE Healthcare. As applications grow more sophisticated, the performance demands intensify.

Take DNA sequencing as an example. Low-precision motion elements perform the task of moving the DNA chips in and out of the machine, where hydraulic or fluid-flow components deliver reagents. Once the reactions take place for each sample, a second system positions a camera over each sample to take an image for analysis. The core data-acquisition motion systems involve high-resolution motion along the x, y, and z axes, often with an additional rotary axis to compensate for misalignment.

Compared to a packaging line consisting of hundred highly-synchronized axes, the motion requirements seem simple - until you consider the scale. There was a time the sample chambers on DNA well plates were separated by distances on the order of millimeters, easy to address with open-loop stepper motors. Today, as part of an effort to drastically reduce the cost of DNA sequencing, chips can feature in excess of 60,000 separate DNA probes on a substrate a mere centimeter or two on a side. That increases the performance demands by orders magnitude. "Now you need to be able to position to sub-micron type accuracy," says Ron Rekowski, advanced automation division manager at Aerotech Inc. “You’re going from a brute force, low-cost automation application to a very high-end inspection application.”

Systems typically use one of two methods to image the plates: continuous scan or step-and-image. Each carries its own challenges. In the case of discrete imaging, the system must step, settle, then capture an image. The faster the settling time, the higher the throughput of the system. “It's a question of how quickly you can 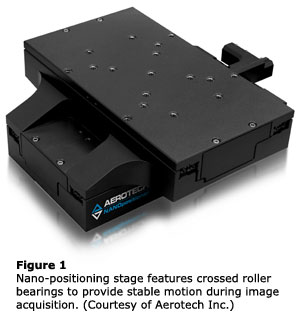 move from point A to point B and be stable," says Rekowski. "You're talking position tolerances that are in the tens to hundreds of nanometers.” It's more than a question of motor performance; it's a system-wide design challenge. To ensure accuracy, system motion has to be based on a high-resolution, high-fidelity feedback device. The mechanical structure needs to be stiff enough to minimize vibration. Polynomial motion profiles can be designed to avoid exciting resonances that might increase settling times.

Continuous-scan imaging seems as though it might be easier than discrete imaging, but it carries challenges of its own. In continuous-scan mode, the camera fires based on positional sequence. Any dithering can blur images, so velocity control becomes essential, as does straightness of travel (see figure 1). "The cameras have such high magnification, they don't have a lot of focal depth, so the mechanical system needs to be extremely flat," says Rekowski. "If it's not extremely flat then you need a closed-loop servo control system that monitors the height of your substrate and adjusts the focus on the fly, so you’re moving extremely high-bandwidth type systems. Your servo has to be capable of sustaining these data rates.”

With tens of thousands of samples involved, sequencing an entire chip can require hours of near-constant operation. To maximize throughput, systems need to image as rapidly as possible, ideally at a rate of one sample per image frame; at standard video frame rates, that means acquiring data every 33 ms. Particularly for step-and-image systems, it's a demanding process. "You need to make a move [from sample A to sample B] within the frame rate and leave yourself time to settle, and then do it again," says Rekowski. "That's an extremely high-duty-cycle application. Even though the moves are quite small, it’s happening at very high rates so you need to make sure that your bearing and motor technology are up to the task.”

Indeed, reliability is every bit as important as for high-margin applications like semiconductor fabrication. “When [DNA sequencers] go down, it's an extremely expensive proposition in terms of lost revenue," says Rekowski. Samples are precious - in the case of forensic evidence, they can be irreplaceable and the results a matter of life or death. Systems can't afford to fail. Although the instruments tend to be tabletop sized rather than hundreds of feet, the use of smart, network components still provides big benefits. "Visibility deep into the process is very important," says Rekowski. "Going with networked, distributed drives allows you to look all the way down to the currents that are commanded in the individual phases of the motors so you can detect when things are starting to go wrong."

The freedom to perform maintenance at a convenient time instead of interrupting an analysis in mid-process is one important advantage to servo motors. The ease of replacement is another. The positioning elements in a sequencer tend to be deeply embedded in the machine. If those elements are mechanical slides or air bearings, taking the machine apart and replacing them can be both complex and time-consuming. It's far easier to swap out an electrical component mounted in an 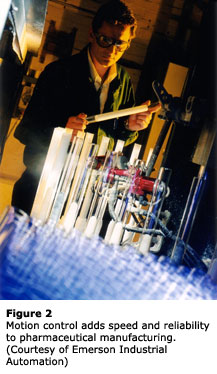 Disposable design
Data acquisition and materials handling are not the only tasks performed by motion control in the life sciences. Although pumping fluid seems like a good task for a fixed-speed motor, in drug discovery and drug manufacturing alike, applications require the flexibility of electromechanical technology. “Some of these processes we’re investigating require very precise control and specific aliquots of fluid,” says Griffin. “They can vary within the same process, so you're dispensing one amount in one case and a different amount in another. Simple on-off, fixed-speed motors, while they’re cost-effective, don't have the capability for the dispensing tasks needed for the application.”

Although research-grade systems can afford to trade off price for performance, manufacturing operations like pharmaceutical production must focus on controlling costs and reducing risk. One recent trend in this area involves using disposable bioreactors for biotech and pharmaceutical drug production when possible and pushing the complexity into the machine. The approach eliminates the problem of cross contamination and sterilization, but it poses new design issues. "You can no longer insert devices into the reactors to perform the necessary process steps, such as flow control, agitation, and monitoring control variables like pH, oxygen levels, etc,” says Steve Bartz, Director of Motion Control at Emerson Industrial Automation. “If you’re using a disposable bag, you don't want to insert stainless-steel sensors or agitators, which would potentially contaminate the mixture. You have to come up with new ways to gain access to the solutions such as using magnetic coupling to manipulate a disposable agitator.”

In the case of analytic systems or even point-of-care devices, the disposable approach provides another way of thinking about cost. “Say you want put a pressure sensor on your device," Griffin says. "Even a $4 pressure sensor may be too much for a disposable kit. You have to look at other solutions like gathering input on the hardware side of things, putting some of the cost into the machine itself.” Another approach is to use plastic versions of components like valves. It works, so long as the focus remains on performance. The devices have to be coupled in a simple, reliable way that provides repeatability and precision.

A final trend Griffin sees is the use of dedicated motion controllers, or even PCs, rather than programmable-logic controllers (PLCs) to run the machine. PCs provide scalability and permit a greater degree of fine tuning on each axis, he notes. “I don't know many folks that use PLCs for this application space because it's so limiting," he says. "They’re really more geared toward factories. With a lot of the processes that I'm dealing with, you need to do things in parallel with the same controller - you may need to synchronize multiple axes, you may need to also deal with a lot of I/O and analog input in terms of sensors and sensor feedback and while PLCs can do that, I've always found them somewhat limiting for these kind of benchtop type systems in this field.”

As healthcare increasingly leverages genomics and proteomics, the life sciences sector is becoming big business. For the technology to realize its promise for the majority of society, though, processes need to be fast, economical, and unfailingly reliable. The power of motion control will bring life sciences to the forefront.

What’s The Power Behind ETHERNET Powerlink