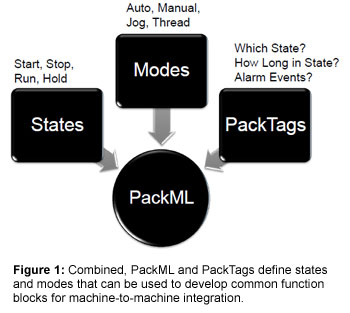 For applications such as packaging and printing, factory floors can feature machine lines hundreds of feet long. In the traditional model, the individual elements—a form-fill-seal machine and a case packer, for example—frequently operate as difficult-to-integrate silos. At the motion layer, machine operation requires equipment-automation programming to cover dozens of activities, some sophisticated and unique, some mundane; yet all require engineering hours to code, test, and validate. End-users, in particular, needed a better way to bring all of this together. Over the past decade, the International Society of Automation standard ISA-88, initially developed for batch processing, has been augmented to encompass packaging challenges. The latest version of the standard now features concepts that apply to packaging and there is a packaging state model and interface model (PackML, PackTags) that simplify integration in modular machine lines, and a section focused on the motion layer (Make2Pack) that opens the way to modular code development and enormous savings in machine design.

After establishing ISA-88 in the late 1980s to create a modular approach for the batch processing industry, the ISA started development of Make2Pack (ISA-88 Part 5) to address equipment and control modules. In the early 2000’s, the Organization for Machine Automation and Control (OMAC), driven in large part by end-users like Procter & Gamble, began work on a standard of its own to address packaging, in particular. In 2008, the two organizations combined efforts to release PackML (ISA TR88.00.02-2008 Machine and Unit States: An Implementation Example of ISA-88). PackML delivered a state model that simplifies integration in modular machine lines (see figure 1).

A fairly typical packaging line might include a machine that erects a carton, a machine that inserts the product into that carton, another machine that applies the label, one that inserts the cartons into cases, a final machine that loads those cases onto pallets. In a traditional design, each of those machines is a separate element, often from different vendors and with very different software that needs to be integrated. “Each machine in a line has a different procedure that is used for ‘auto/production’ but has the same method to activate that procedure and view the results and control the machine, even though it is very different from the machines around it,” says retired P&G engineer and one-time OMAC committee chair Dave Chappell, now CTO of Complete Manufacturing Automation Associates (Denver, Colorado). Developing the capability to monitor the entire line for process control, or adjust operations over the entire line can be a time-consuming challenge. PackML defines a series of modes (e.g. production, cleanout, etc.) and states (e.g. Stopped,Idle, Starting, Execute, etc.) designed to give a common look and feel to the machine interfaces. PackTags, part of the same ISA-TR88 release, are named data elements used for open architecture, interoperable data exchange in packaging machinery.

For manufacturers, remaining competitive means monitoring throughput and metrics like overall equipment effectiveness (OEE) in real time, and that requires data. The state model approach not only simplifies machine-to-machine integration but enables communication from shop floor to top floor. “You can watch the bottles fly by or bags being filled but that’s like trying to drive a car by seeing how fast you go past fence posts versus actually looking at a speedometer,” says Dennis Brandl, Chief Consultant at B&RL Consulting. “You'd like to have quantitative information available across your entire line which means you want to collect information from a disparate group of equipment.” The state model approach provides an easy way to integrate a line and deliver that capablity, which is why end users are increasingly interested in it.

The state model approach also simplifies operation at the supervisory control level, giving manufacturers the ability to slow the line down if a problem has cropped up on the back end. It allows them to take control of the entire production line as opposed to each individual machine. It also provides a more sophisticated level of process control. “Just because each machine is running optimally doesn't mean that the entire line is running optimally,” says Brandl. “As you collect information you can use that information to determine where your bottlenecks are and optimize your process.”

Modularity isn’t just about line-level integration, however. Applied to the machine level, it can significantly speed and simplify the design of new equipment and improve maintenance of existing versions.

Motion benefits
There was a time that operating at 600 parts per minute was fast for a particular packaging machine. These days, the same machine is creeping toward 700. Delivering that level of functionality can involve thousands of lines of code, turning the development of a new platform into a lengthy process. Just as PackML provides the modular reusable code blocks for the PackML start/stop/hold etc., Make2Pack provides the guidelines for reusable automation blocks that seamlessly interact with every start/stop/hold block developed for the PackML model implementation.

Consider a bagging machine, whose operation can be divided into modes like “producing,” “setup,” etc. (see figure 2). The machine has a series of status lights and warning alarms that correspond to various operations. Each of those operations—turning on green and blue lights and sounding a horn when the machine starts up, for example—must be executed in the control software. At the same type, many of these same operations must be executed in virtually every machine in an OEM’s repertoire. Make2Pack provides guidelines for developing reusable code blocks for such common operations as start, stop, hold, etc., allowing developers to stop squandering time redoing the same task and instead focus on aspects of development the differentiate their product in the marketplace. Because developers no longer write and rewrite the same block in different ways and in different places in the code for each machine, the approach helps eliminate what refers to as spaghetti code.

“We've developed [reusable code] where one block will include all the basic control for an axis and it doesn't matter whether it's a servo motor, a stepper motor, a frequency drive, whatever,” says John Kowal, Packaging Market Development Manager at B&R Industrial Automation and OMAC board member. “One function block or at most two or three will handle all the motion—we’re vastly simplifying what would take multiple function blocks to create a simple, scalable, easy to reuse code block.”

The technique can deliver big savings to machine developers in terms of reduced engineering hours and faster to market, says Chappell. “There are companies that I've worked with that are realizing 80% plus reductions in what it takes to roll out new machines,” he notes.

Following the Make2Pack approach not only speeds development by minimizing time spent on common, repetitive tasks, it provides a modular structure to code organization. The format allows development teams to craft a document that they can show to other engineers on the project or even, eventually, to operators on the floor so that they can understand the various activities and actions of the machine. The standard is as much a design paradigm as a development tool. “The beauty of this approach is that now I can break my handling of the states and modes away from how my equipment modules and control modules are programmed,” says Dan Amundson, Technical Section Head at Procter & Gamble and OMAC board member. “It dramatically simplifies the software.” To see an example of the technique executed in ladder logic, see the sidebar to the left. 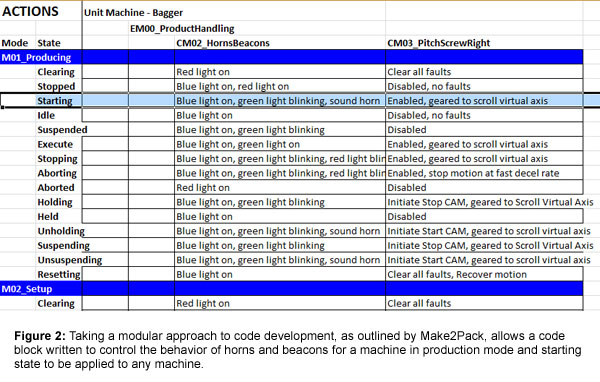 Once the design is complete, the actual process of building should devolve into an efficient, easily replicated process. That said, most OEMs offer a fair degree of customization. That’s easy to accomplish by tapping the wizards in the engineering department who did the development of the first place. Same thing holds true for maintenance. The problem arises when those wizards aren’t available, whether because of sick days, vacation, retirement, or simply moving to another company. That’s where the structure that Make2Pack adds to the process, as well as the reusable code blocks, convert maintenance into a process rather than a dependence on one specific person. That’s particularly important in the case of multinational firms shipping equipment all around the world.

Currently, the standard is still at the level of early adopters. Admittedly, it takes a certain amount of time and effort to adopt, although OMAC is in the process of forming workshops to ease the transition. One of the reasons that some OEMs are reluctant to embrace the standard is because they fear it will limit their ability to innovate. Not so, says Amundson. “There are a lot of mundane things that have to happen on every machine. Every machine that makes products for us has a start and stop button, they all have to have alarms, they all have to handle faults. Things like that are fairly mundane. PackML and Make2Pack allow us to do those mundane things in a repeatable way all the time. Rather than being hung up on how they’re going to program this start and stop, machine builders can focus on [a feature like] a control module for a feed screw that's unique, and make that really be their competitive advantage.”

There was a time ISA-88 was new to the batch process industry, as well; today, it is accepted practice. Ultimately, the acceptance of PackML and Make2Pack may just be a question of time. To the end-user, it provides big benefits, and they are going to increasingly demand it. “We get more repeatable solutions that are higher quality, and our experience so far is that it will make it easier for us to support these machines,” says Amundson. “At P&G, most of our business units are including PackML in their specifications and we are systematically expanding it further as it makes more business sense. I think this is the way of the future.”

Mechatronics and the Design of Intelligent Machines and Systems