Mixing it up: Trends in Packaging and Palletizing Robotics

The accelerating adoption of robotics has been among the most important trends in packaging and palletizing in recent years. With the speeds and flexibility that robotics offer, this trend will continue.

“Packaging and palletizing robotic applications are a growing industry. Just about everyone palletizes or packages their product,” says Kawasaki’s Bob Rochelle. 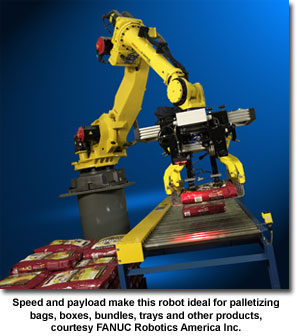 “The cost of robotic technology has come down while performance and user-friendliness continues to improve in packaging and palletizing applications,” says Dick Motley, Account Manager for Distribution Network with FANUC Robotics America Inc., Rochester Hills, Michigan. “The trend towards the widespread adoption of robotics in packaging and palletizing applications is similar to what we have seen in the computer industry.”

Packaging Trends
“Recent trends in packaging applications have seen an acceleration in the use of robotics over hard automation,” says John Dulchinos, President and Chief Operating Officer, at Adept Technology Inc., Livermore, California. “I see a couple of high-level trends that will continue in the next several years.”

Dulchinos’ second trend is the role of vision systems in packaging work cells. “Vision is more highly integrated in packaging robots because randomly oriented product placement at high speeds requires vision and conveyor tracking. In addition, color vision is replacing gray scale.” Dulchinos also says vision can be taught to recognize products that vary in shape, such as many food products.

As for the packaging itself, robots are handling more blister packages, those pre-formed plastic wrappers used for packaging everything from small consumer goods to unit-dose packaging of pharmaceuticals. “The biggest trend I see is more blister packs,” observes JR Musselman, Software Engineering Manager at Doerfer Companies, Greenville, South Carolina. “End-users like blister packs because they are inexpensive and can be handled at very high speeds.”

Robots are often called on to package irregularly shaped items. Robert Rochelle, North America Sales Manager with Kawasaki Robotics (USA) Inc., Wixom, Michigan, describes such a project. “If a box is going to be stuffed with something irregularly shaped, like a lawn mower, we take data of its smallest to largest dimensions. We design the tooling and the pallet pattern to take into account the largest dimension.” Rochelle points out that by doing a little reverse engineering, work cells are integrated to get the result the end-user needs.

Bigger Pallets, Smaller Pallets
Robotic palletizing also has picked up a great deal in the last several years, according to Richard Tallian, Robotic Consumer Industry Segment Manager, ABB Inc., Auburn Hills, Michigan. “We are seeing a trend away from traditional palletizing work cells where a robot services up to four product in-feed stations and up to four outgoing pallets,” Tallian says. “The robotics industry is now seeing projects where a single robot is dedicated to a single end-of-line palletizing station. End-users are trying to avoid conventional material handling equipment.” Instead, end-users are putting robots at the end of the line to do complete palletizing operations, submits Tallian.

Tallian adds that larger end-users are driving a change towards smaller pallets that are used as displays in their stores. These pallets are assembled in a warehouse, trucked to the point of retail and put directly into stores. “Large retail stores are moving away from conventional pallets, which were traditionally loaded to heights over 86 inches. Now we are seeing more pallets loaded to 56 inches because the end-user wants these pallets placed directly into a store as end-of-aisle displays.” 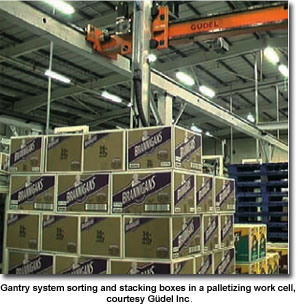 On the other end of the size scale, some end-users want robots to build larger pallets to maximize trucking efficiency. “The trend has been towards 110-inch high pallets, because that is what end-users can transport with by truck,” observes Brian Kocks, Sales Manager for Modules and Robotics, with Güdel Inc., Ann Arbor, Michigan. Loads are also getting heavier. “We are starting to see payloads going over the standard 100 kg.”

Mix and Match
Robotics building mixed loads for a specific customer represents a significant emerging trend in palletizing applications, says Dick Motley. “I have seen more building pallets to order. The challenge is to build a puzzle where the pallet is made of a variety of shapes, sizes and weights that goes to the point of retail,” reports Motley. “Vision and software evaluate stability, shipping density to build that pallet puzzle.”

The variation of products to be mixed poses its own set of variables that integrators must take into account when designing palletizing work cells. “A store might want to have heavy, odd-shaped bottles of laundry detergent stacked on the same pallet as cases of fragile drinking glasses or boxes of snack food items," describes Motoman’s Tom Sipple. “End-users would not want to stack the laundry detergent on top of the glasses or next to the food items. These are factors that must be considered." Grippers must be flexible and able to handle a wide range of products sizes, shapes and weights, advises Sipple.

Matthew Garcia, Robotics Product Manger at Thiele Technologies, Reedley, California agrees that mixed-load palletizing is an emerging trend within robotics. “The biggest trend is mixed-load palletizing rather than one product filling an entire pallet. End-users are starting to look for robotic systems that can place multiple products onto one pallet.”

Garcia adds that end-users are now building a complete mixed-to-order pallet for delivery to one location rather than having to order a series of entire pallets of individual products. “Mixed-load palletizing is in its infancy, due to the complex programming required for this application. When companies realize the value of mixed-load palletizing, they will begin to heavily invest in it.” Mixed-load palletizing will be the norm in three to five years, forecasts Garcia. 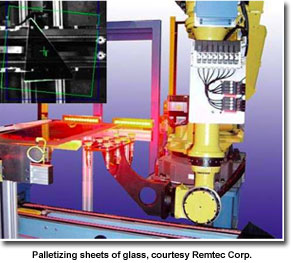 Mixed-load robotic palletizing applications are slowly moving from large-scale end-users to smaller manufacturers and distributers. “Mixed-load palletizing is heading in the direction of being the norm. Automated solutions are adopted first by larger, higher-volume operations such as distribution centers, where volumes are very high,” claims, Keith Rosnell, Chief Executive Officer of Remtec Corp., Cincinnati, Ohio. “Falling costs of robots and controllers, and the difficulty in getting labor leads to more mixed-load palletizing applications being installed into smaller plants, which have a more diverse product mix. That is spurring adoption of robotics systems because they are more flexible by nature than hard automation.”

Rosnell goes on to say “Remtec has seen less single SKU unit loads on pallets and more made-to-order palletizing applications and non-standard types of cases such as open cases.” Rosnell explains that open top cases can be packed with just about anything and are used for mixed-load packing operations. “Remtec integrated a work cell where the robot depalletizes cases of carton flats and loads them into a high-speed cartoning machine. The robot finds the case on the pallet, flips it over and places the contents onto the cartoning machine,” Rosnell recalls. “The contents of those cases were carton flats but it could have been anything.”

Mixed, Sometimes Shaken
After a pallet of merchandise has been shipped, it needs to be dismantled at its destination. Robotics have an important role in depalletizing, although the task is often made more challenging due to shifting of the contents during shipping. A box or carton may not be where it was relative to other items on the pallet prior to trucking.

ABB’s Richard Tallian also speaks of robotic depalletizing applications. “Depalletizing uses a vision system to identify where a box is on a pallet then locate layer by layer where a product is,” Tallian says. “During shipment, products shift around on a pallet, so depalletizing is more difficult because integrators have to make the work cell more adaptive in identifying where the product is located.”

Matthew Garcia gives an example of a recently integrated depalletizing work cell. “We use a camera mounted on the end of a robot that takes an image of where the product should be and uses a vision system to re-calibrate the robot’s position so the product can be picked properly.” In warehouses and re-distribution centers, where multiple products are on a pallet, a vision system is used to depalletize to make it easier to stack for delivery to its next destination.

Continuing Trends: The Impact of Energy Costs and the Environment
Changes in manufacturing, primarily due to dramatic increases in energy costs will boost robotic packaging and palletizing business. “I read and hear a lot about sustainability and a broad rethinking of packaging design with attention to the packaging line, energy consumption and new materials. These developments will be favorable to robotics due to their inherent flexibility,” asserts Dick Motley. “Robotics can accommodate new forms of packaging easily which is not so with conventional technology.”

Richard Tallian also believes higher energy costs will change the nature of packaging and palletizing, and that robotics can help smooth that change. “I see considerable focus on warehouse distribution and that is still evolving. A great deal of effort is being put into reducing energy costs and reducing materials, particularly pallets, cardboard and shrink-wrap. These environmental issues will really impact packaging and palletizing robotics”

For more information, you may contact any of the experts listed in this article or visit RIA’s Info Center on Robotics Online.