Whether it's fabricating car parts, pizza pans, or the structural panels and members of the machine that presses those parts, metal processing plays an essential role in our lives. For decades, mechanical and hydraulic systems constituted the state-of-the-art in industrial metal processing machinery. Today, motion control increasingly provides manufacturers with the flexibility, reliability, and ease of use that they need to remain competitive in a demanding global market (see figure 1).

Metal processing encompasses a wide range of techniques, from the deep-draw metal stamping that creates products like soup pots and transformer housings to the laser cutting used to form the chassis of bulldozers. The applications may not present the stringent requirements of a 300-part-per-minute packaging line, but they pose challenges of their own. Parts often fit closely together with other parts, imposing tight specifications for accuracy and quality. Motion control provides a level of performance required, whether it's operating a punch press or a positioning table in a laser cutting system. “With those tight tolerances, you have to have that accuracy,” says Jim Wiley, Jim Wiley, Product Manager at Parker Hannifin (Rohnert Park, 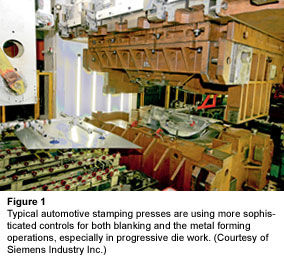 California). “From a controller standpoint, having a fast trajectory update date can be critical. It's not something you typically want to do with your drives updated over CANopen- or DeviceNet-based platforms.”

Computer-numeric-controlled or laser cutting machines may leverage servo motors to precisely move parts in three-dimensional space. That's not so difficult when the machine is moving a thin piece of auto-body metal. When it's a half-inch steel plate used to form the chassis of a backhoe, though, the mass can present high inertial loads. To reduce settling times and eliminate the possibility of parts shaking out of place, machine builders leverage more sophisticated trajectories like s-curve and trapezoidal motion profiles to minimize jerk and speed settling time. Control platforms often integrate both programmable logic controllers and dedicated motion controllers. Another increasingly popular approach is to use a programmable automation controller that can provide traditional motion-control functionality with more sophisticated options and easily programmable environment.

Pressing Business
Traditional mechanical presses leverage constant-speed motors and flywheels to form or punch patterns in sheet metal. Metal forming lines typically consist of multiple modules linked together in a master-slave configuration. In a blanking line, for example, a roll of sheet metal known as the coil first unspools on the uncoiler, and then passes into a straightener, in which multiple rollers manipulate the metal to remove damaged material and release the internal stresses so that the sheet will lay flat. Because metal pressing is a start stop operation, the process requires a looping pit to buffer the material before it is fed into the press by a position-controlled roll feed.

Inside the press itself, a crankshaft turns to cyclically transfer power to a die that punches, presses, or otherwise forms the material. After the press operation, stacking and conveying equipment removes the parts from the press. For lines with multiple presses, servo-driven transfer equipment provides precise motion in three dimensions to position the parts from one die to the next in the progressive operation (see figure 2).

Manufacturers using metal presses often find themselves trapped between conflicting demands. On one hand, maximizing throughput produces more parts at a lower overall cost. On the other hand, the physics of metal forming impose constraints on speed. Run a press too fast, and at best, quality suffers; at worst, the press itself can suffer catastrophic failure.

Consider a stamping or punching operation in a c-frame press, which looks just the way it sounds, with the metal punching taking place in the gap of the "C." During the process, the die applies force to the work piece, introducing tension and compression in the c-frame, until the metal of the work piece fractures and the hole is punched. In the instant of fracture, the equal and opposite force that the metal presented to oppose the force applied by the die suddenly disappears. This abrupt removal of compression results in snap through, which stresses the components of the machine in a phenomenon known as negative tonnage. The elements of the frame in compression suddenly go into tension, and those in tension switch to compression. For a few seconds of each cycle, the machine frame is wracked with stresses. 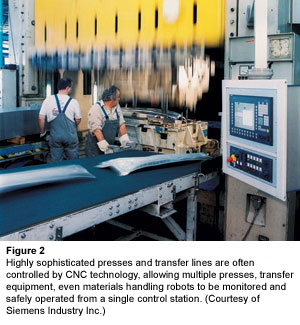 Ideally, a machine builder takes negative tonnage into account when developing a press, designing in sufficient structural strength as well as damping schemes to minimize the effects of negative tonnage. When run beyond its speed range, however, even the best designed machine can sustain damage. “If you're not careful, you can reach a point at which you will fatigue the structural members of the press and cause a mechanical failure by simply trying to run the press faster than it's designed to go,” says Jim Mantooth, Industry Business Developer at Siemens Industry Inc., (Norcross, Georgia).

Servo presses provide a way to get higher-speed operation without introducing excess negative tonnage. Unlike traditional motor-fly wheel combinations, servo presses operate with sophisticated velocity profiles, allowing machine builders to maximize throughput by optimizing acceleration, deceleration, and forming velocities. When you have completed a part, you accelerate at the maximum rate possible for the motor, within the boundary conditions of the press, until you get to top dead center. Then you begin decelerating the ram in the press to the ideal speed at which you would hit the material to begin the forming process,” says Mantooth. “By taking advantage of those periods of time between when you’ve completed the metal forming and the next impact of material on the presses, you can increase strokes per minute by as much as 30%.” Without these specialized motion profiles, the press process would require large energy spikes. The systems further enhance efficiency using regenerative braking. Designs can also be energy tuned to optimize in feed and the size of the regenerative braking capacitor bank.

Increases in the size of servomotors over the last few years have made the technology feasible not only for presses but for deep-draw metal forming processes of the type that form everything from sinks to engine-block covers, and for try-out presses, which allow end-users to test new dies for mechanical interferences. In the past, such applications required the muscle and flexibility of hydraulic presses. Not so, anymore. “Now, with a servo press, you can control the movement of the ram any way you wish because it is a true servo that's now powering the eccentric," says Mantooth. "Whereas traditionally a hydraulic press was used for deep drawing presses and try out applications, that can now be done with a servo press, which gets rid of the maintenance issues associated with hydraulic presses.”

Indeed, uptime is a big part of the servo press appeal. The just-in-time supply-chain model followed by many manufacturers is predicated on high-availability. In servo presses, smart components monitor their own health. High-speed networking, courtesy of Ethernet busses, delivers us performance and process-control data to management and maintenance. Load cells monitor the negative tonnage generated after snap through, checking to see whether the press is exceeding operating parameters. The feedback also provides early warning of tooling getting dull or any other maintenance issues that need to be addressed.

Meanwhile, as rising gas prices put the spot on fuel efficiency, manufacturers are turning to higher strength steels that can produce thinner, lighter parts. Switching to a different type of coil isn’t just a matter of selecting a new recipe in the HMI, however. Depending on the parameters, the change may require anything from new tooling to more powerful drives and motors.

Driven by a range of benefits including higher throughput, more robust performance, and simplified maintenance, motion control is increasingly carving out a niche for itself in the metal processing industry.