“Robot safety is important to RIA because lean and safe are partners in an application. We are refining the message of the importance of safe robot applications,” professes Jeff Fryman, RIA’s Director of Standards Development and coordinator of the conference’s agenda. “With the introduction of new international safety standards and updated R15.06, end-users need be prepared for advances in robot safety.” R15.06 is RIA’s guideline on safety requirements for industrial robot systems. 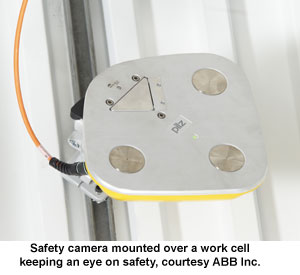 Robot users who attend the conference will have the opportunity to learn about changes in the safety standards. A presentation, “Updating Safety Standards” lead by Roberta Nelson Shea, General Manager and Chief Operating Officer at Pilz Automation Safety L.P. (Canton, Michigan) will look at current developments in robot safety standards. Nelson Shea, chair of RIA’s R15.06 committee said, “I will talk about what has been going on internationally in robot safety and explain how the International Organization for Standardization’s (ISO, Geneva, Switzerland) guidelines, 10218 Part 1, have been adopted by the American National Standards Institute (ANSI, Washington, DC.).

Nelson Shea continues, saying, “ISO 10218 looks different from R15.06 because the former has two parts. Part 1 covers designing and building a robot. Part 2 will cover integration and use of industrial robots.” 10218 will be a global standard for robots and their integration, harmonizing safeguarding requirements, says Nelson Shea. “End-users of robots will only need to know one safety standard. Integrators will not need to know a myriad of differences in safety requirements depending on where the robot system will be used,” remarked Nelson Shea. Part 2 is now being put in final draft form.

Nelson Shea turns her focus to power and force collaborative operation. “Power and forces the robot is capable of producing must be limited so that no one would be injured. We do not yet know what those values are yet.” 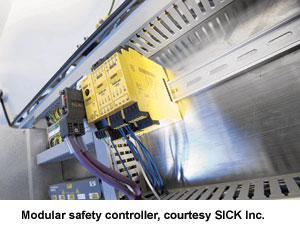 Ian Brough, Sales Engineer with SICK Inc. (Minneapolis, Minnesota) will conduct a workshop on functional safety. “My workshop will be an update of the ISO 13849-1 standard for robot safety control systems and what is changing in Europe. I will look at how end-users can ensure machine safety in the future by explaining new control concepts as defined by these new standards.” ISO 13849-1 relates to general principles for designing safety into industrial machinery and their control systems. Brough says he will do an in-depth analysis of how the new standard differs from the current method of rating safety devices, such as light curtains and scanners, through an example work cell.

Garmann outlines his workshop, saying, “Robert Rochelle and I will be speaking on how and why robotics makes financial sense even in a down market. We will tag team, covering several applications such as welding and material handling that have health and safety impacts like repetitive motion injuries.” Garmann adds, “Multi-channel circuits, safety PLCs and relays have become instrumental in increasing the safety of robot systems. These safety features in conjunction with new functional features are available in controllers to ensure robots do what they are programmed to.”

Chris Soranno, Machine and Process Safety Engineer of Omron STI (Fremont, California) will be speaking on selecting safeguards. “I will be talking about the hierarchy of applying controls and guidelines in selecting the proper one for an application. In addition, I will present an overview of safe guarding devices mentioned in the 15.06 standard.”

Soranno’s hierarchy of control ranges from removing a person from a process through the use of robotics, to installing physical barriers and presence sensing devices such as light curtains and safety mats within work cells. The next level of control involves lights, beepers and other means to make people aware of threats to safety. The next levels of safety control stems from proper training and the use of personal protective equipment along the lines of ear plugs and eye protection. 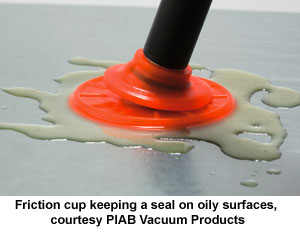 PIAB Vacuum Products (Hingham, Massachusetts) will show its products during the National Robot Safety Conference’s tabletop trade fair. “PIAB will highlight a new suction cup design by demonstrating the friction capacity of different cup styles and their impact on holding force. We will compare a standard suction cup to new cleat designs for use in press applications,” says Edward McGovern, PIAB’s Vice President of Sales and Business Development. “With improved cup design, holding capacity increases 20 to 30 percent.” McGovern maintains increasing holding capacity is an important safety consideration so that sheet metal is not thrown around stamping presses.

McGovern describes PIAB’s second demonstration. “We will show a vacuum safety check valve that creates a seal between the vacuum pumping device and the part. This safety valve is used to hold a part in the event of losing pressure from a vacuum pump.” PIAB’s safety check valve demonstration will compare centralized and decentralized vacuum systems. “We give attendees the opportunity to decide which is the best system for their needs. Both centralized and decentralized vacuum systems are safety rated and hold parts when an emergency arises such as when a vacuum pump malfunctions or a line is cut,” says McGovern.

Likewise, Ross Controls (Troy, Michigan) will exhibit its pneumatic valves during the trade fair portion of the NRSC XXI. “When someone enters a work cell, our safety-rated valves put it into a zero energy state,” says Eric Cummings, Safety Industry Manager at Ross. “Robot safety standards have been updated to require isolating energy sources when people enter hazardous areas. If a person goes into a hazardous area a robot must stop.” Cummings adds, ”We want to expose the availability of pneumatic safety products. Integrators are very familiar with electrical safety controls like interlocks, safety relays, and light curtains.” 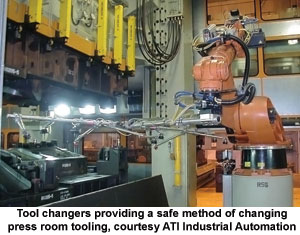 Many other robot and safety peripheral equipment manufacturers will exhibit during the tabletop trade fair (List of Exhibitors) at the National Robot Safety Conference XXI. “ATI Industrial Automation (ATI, Apex, North Carolina) will show our tool changer that allows robots to change tooling without a manual operation,” says Robert Little, Product Manager at ATI. “Also, our collision sensor can automatically reset itself after recovering from a crash. The end-user does not have to open the safety gate in order to reset the collision sensor, making for a safer application.”

Robin Schmidt, Chief Engineer of ABB Inc.‘s (Auburn Hills, Michigan) robotics division, will present attendees with case studies to illustrate what they have learned at the conference. “These case studies give practical examples of how to properly apply the new robot safety standards and review how common safety problems are solved.” 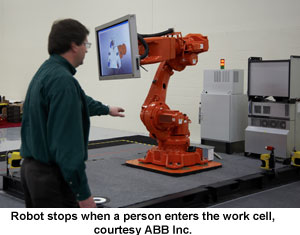 ABB will accentuate its software package designed to comply with the new robot safety standards. “Our controller software allows a robot’s motion to be monitored in a safe way. Previously, integrators had to design work cells with sturdy hard stops to prevent the robot going into certain areas,” says Schmidt. “Now we have software systems with a high enough safety rating to do that.” Hard stops have not gone away and still have a role to play in protecting robot operators, Schmidt concludes.

Other workshops include Fryman conducting seminars on “Understanding Robot Safety Standards” and leading exercises in risk assessment under R15.06, Aaron Priddy of the Occupational Safety and Health Administration (OSHA) speaking on OSHA’s take on robot safety, and a workshop on “Lean and Safe,“ given by safety consultants Bruce Main and Michael Taubitz.

What compels companies to attend the National Robot Safety Conference? “FANUC Robotics goes to support RIA,” says Claude Dinsmoor, General Manager at FANUC Robotics America Inc.(Rochester Hills, Michigan). “FANUC has been promoting the conference to our customers and integrators because we think the conference is the best forum to get smart on safety. Safety is absolutely vital and end-users must understand the new safety requirements.” Dinsmoor contends that, “Safety is best engineered into a work cell from the beginning of its planning phase rather than tacked on at the end as an afterthought.”

Dinsmoor speaks of debates over the best type of safeguarding devices for robotic work cells. “I hear of questions over the use of gate systems compared to using sensors and screens for protecting robot operators. I am interested in trying to learn how our customers view both of these methods at the safety conference.”

PIAB goes to the NRSC to connect with potential customers. “PIAB’s interest is helping companies improve their productivity through energy-efficient design, increased safety, and increased speed. The National Robot Safety Conference provides contacts that we do not ordinarily see day-to-day and is a forum to communicate with companies that need to improve their safety systems,” Ed McGovern says.

Deciding which workshop to attend poses a challenge for those attending the 21st Annual National Robot Safety Conference. “The safety conference has been organized with competing lines of interest, so attendees choose which is best for them. The conference is designed to give attendees track choices, to address the needs of various participants,” says Jeff Fryman.