Pilz offers a wide range of solutions for your automation. From sensor technology to control and drive technology – with safety and automation included! Not to mention modern operator and visualization systems that you can rely on. A variety of automation solutions for small, simple machines through to large, networked plant and machinery provide maximum flexibility. Whether you want to standardize your safety, implement safety and automation in the periphery or are looking for the solution for complete automation. Pilz develops environmentally-friendly products using ecological materials and energy-saving technologies. Our offices and production facilities are ecologically designed, environmentally-aware and energy-saving. As a solution supplier, Pilz services encompass the entire machine lifecycle, including risk assessment, safety concept, safety design, and more. CMSE – Certified Machinery Safety Expert, taught by Pilz, is the international qualification for machine safety.

With numerous multi-robot cells in use, a company wanted to increase existing robotic cell efficiency, making their systems more 'lean,' but with no compromise in safety. The company would only proceed if the new setup improved overall production uptime, was cost justifiable, and reduced the number of steps for troubleshooting.

Common safety issues were overlapping robot zones, continuous access for operators to load and unload parts, safe access for maintenance teams, and the need to keep other equipment running if one component became inoperative.

The company would evaluate the need for new equipment by the number of inputs and outputs it could handle, utilization of a common technology for different existing plant systems and quick, simple modification for future adaptations. Standardizing the control architecture would also simplify purchasing agreements, paperwork, and training. Employees would be able to handle different sections with minimal adjustments.

Initial Goals
The ideal system would address the following:

Lower costs: Components must be cost-competitive and meet all required needs. The safety system should use fewer parts, be easy to install and maintain, and simplify the layout.

Reliability: All components, including software, shall meet current global standards and be robust enough to adapt to foreseeable future issues. Reliable components will be operational for the life of the equipment, have diagnostic tools for easy identification of faults, and fast methods to verify faults are corrected before restarting the system.

Flexibility: A common technology that can change as the equipment and layout are modified for future production needs.

Improved diagnostics: Quickly identify the location and type of faults. Faults are kept in a centralized location, minimizing paper records.

Ease of installation: It should have components that can be installed or modified and tested during company shutdowns or weekends with standard tools and minimal training.

Tamper-proof: The equipment should have a testing capability to verify components are fully functional and have not been bypassed. The design will maximize operator access in the safest manner.

Communication: The new system should store and retrieve backup programs, verify the correct program is loaded, and send information to the main system with faults indication, status, and zones.

Constraints
The company had to deal with several fixed conditions. Floor space was limited to the current layout or smaller. Current equipment was in production with no immediate plans to change its configuration. A week-long company shutdown was scheduled as the next available time to make equipment changes.

At first, expanding current equipment with additional safety relays seemed the simplest solution. However, the company found troubleshooting faults difficult when the system shut down. There was a concern that safety controls might be bypassed if faults were not isolated and corrected quickly. Cabinets were already full of relays and crowded by new controls added since the system was first built. Time to test each connection was overwhelming and there was little room to add new relays for future expansion.

The next option was a configurable safety system, a series of modular relays that can be selected and configured based on the I/O count. It can be configured off-line with a PC and has certified safety function blocks. The modules are much smaller than the safety relays currently used and the same configuration can be used on multiple systems. Such a system would save cabinet space, and reduce wiring since the configurable software would be able to do most of the logic. A variety of communication modules are also available to send diagnostic information to a PLC, HMI, or computer. The cost of using this system was more affordable than replacing safety relays, but several systems would be needed to cover the entire cell. It may also have some limitations when handling multiple zones.

Traditional PLCs (Programmable Logical Controllers) have been a common technology in use throughout the plant. Many of the company’s programmers and maintenance personnel understood how to configure them and non-safety status information was already being sent to a central controls system.

Fieldbus Plus
There were several things the company already liked about its fieldbus system. It is modular with decentralized locations. Past systems have shown a reduction in wiring, which reduced costs and the potential of failure due to cuts and disconnections. They are flexible, since modules can be installed at various locations around the system. This reduces the need for redesigning the entire cell for future modifications. Diagnostics are increased since signals can be sent to a central computer system or PLC.

But the company didn’t know of anyone who had successfully implemented a standard PLC and fieldbus system for a safety solution. There were concerns about certification and developing programs that adequately address all safety functions while also controlling changes. Engineers were unsure their current PLC was suitable for safety applications.

According to current standards, a software/firmware-based system had to have redundancy, diversity, self-monitoring, and be certified for its application by a third party. A standard PLC cannot satisfy these requirements.

The company next looked at a safety PLC and fieldbus. Safety PLC’s are already in use at numerous plants with the technology documented as successful. Evaluating the software, the company found it would be able to safely monitor complex circuits. Certified function blocks were available for all safety devices including e-stops, light curtains, safety gates, and monitoring feedback loops.

The company found it could use over 2000 I/O points and have the flexibility to make changes by adding more safety fieldbus modules. Up to sixteen geographic zones could be used to monitor robots while operators load parts. Cable length could extend up to 3500 meters, and the system could extend further with the use of bridges, routers, and active junctions.

Fault diagnostics could be done manually using the embedded error stack on the system or by using communication modules such as Profibus DP, Interbus, Device Net, Control Net, Ethernet, or Serial. Faults could easily be displayed on an HMI (Human Machine Interface) to show location, type, and information necessary to repair and reset it.

Would It Work With Robots?
Robots are the main equipment used in the company’s system. How well would a safety PLC and fieldbus system interact with existing robots? The safety PLC can monitor the status and location of the robots with limiting sensors, thus safely allowing operators to load parts when the robots are in different zones. The company could also monitor production and local emergency stops.

Other benefits included wear-free solid state outputs. The company was experiencing random failures caused by contactors that were wearing out, and was already planning to replace safety relays. Overall wiring would be reduced by more than 50% using remote I/O with the fieldbus daisy-chained around the system. The system could continuously self-test itself and the safety devices, again sending status signals to the PLC or HMI to indicate faults.

While the safety PLC hardware was more expensive than the relays, engineering design, installation, and long-term maintenance figures were very favorable.  An independent study reported that a safety networking system can realize savings up to 50% compared to traditional safety relays.

The company selected the safe fieldbus system. Since the number of components was greatly reduced, extra space was available in the main controller and remote panels, which also made it easier to access equipment during installation and troubleshooting. Even though the system I/O was increased, the new design eliminated fourteen safety relays, 58 contactors, and all of the wiring associated with it. The entire system was designed and programmed and the panels built and pre-installed prior to a week-long plant shutdown. The company was able to complete installation in about four days, which left ample time for troubleshooting and start-up testing.

As a result, the company has been running with fewer shutdowns and greatly reduced troubleshooting time. Unauthorized bypassing of the system has been virtually eliminated since the company elected to use the monitored manual reset function. Selecting a safety system appropriate for the application can lead to increased production and greater profits. The resulting system can be both lean and safe. 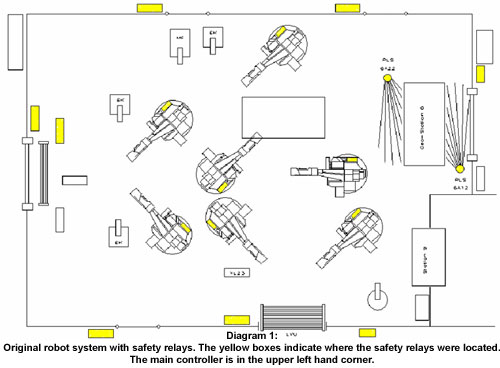 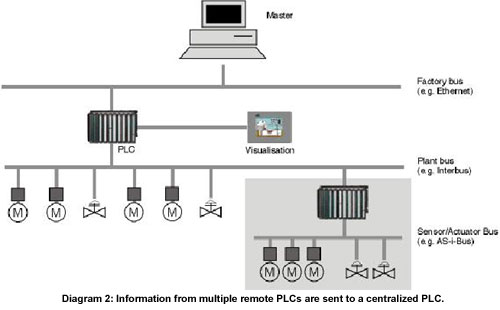 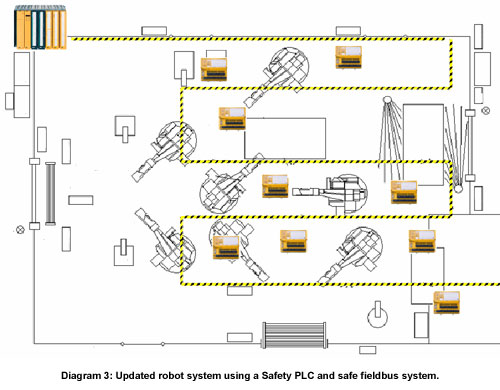