“The permanent magnet is a unique component in the energy conversion process. A permanent magnet in a stabilized condition is a reversible medium for energy transformation. Potential energy is stored both in the magnet volume and in the external field associated with the magnet. Permanent magnets often operate over a dynamic cycle where energy is converted from electrical or mechanical form to field energy and then returned to the original form.”

From a long history of applications in motors and sensors to market-driven new directions in medical, life sciences, 3D printing, and more, magnetic assemblies and applications continue to grow. “What’s important to understand is that magnets are in almost everything in our lives,” says Karla Takasumi, Director of Marketing at Dexter Magnetic Technologies (Elk Grove Village, IL) and chairperson of MCMA’s Permanent Magnet Division. “The industry of producers, fabricators, and material suppliers are contributing to more front-end design analysis and educating on best practices,” she says. “Everyone’s moving up the food chain.”

Ultimately Everything
All material in the world is made of atoms, molecules, and other particles affected by magnetic action, thus, it can be said that ultimately all material is magnetic material to some degree. Among these, those materials that have particularly strong magnetic dipoles and that furthermore have special magnetic properties that give them practical value are called magnetic materials. 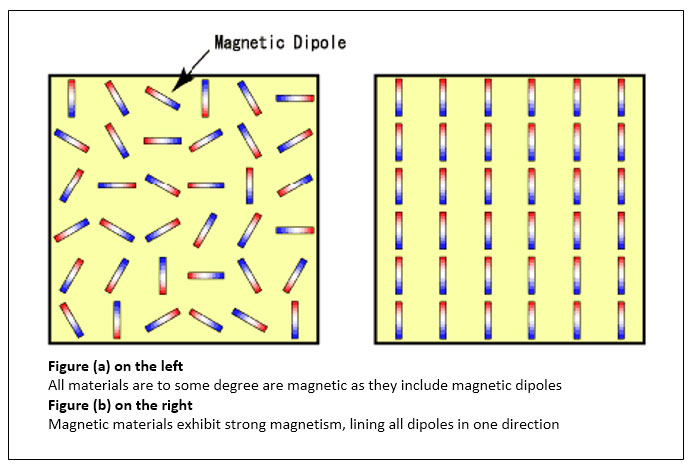 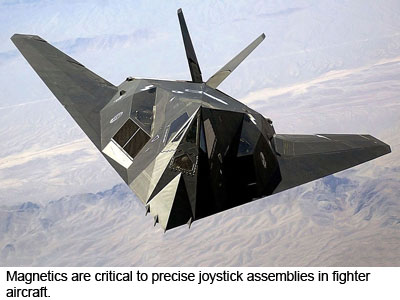 Production Choices
Magnets can be sintered, formed in presses, and even milled out of magnetic materials. Injection molding for magnetic materials is advancing to meet the needs of many industries. Consider joystick manufacturing. The joystick is a mechanism that translates the movement of a column into electronic information using permanent magnets – electronic information that can then be computer-processed. Such magnetic positional sensing is critical for human-machine interfaces from wheelchairs, forklifts, and fighter jets, just to name a few.

Magnetics are critical to precise joystick assemblies in fighter aircraft.
Injection-molded magnets are made by mixing magnetic material with a polymer binder, allowing the magnet to be molded just like any other moldable resin. One of the greatest advantages, EA Magnetics (Medford, NY) says, is the high degree of shape complexity possible, including gears, undercuts, and snap fits. Injection-molded magnets can be inserted directly onto or around existing components, often making production and assembly processes more efficient.

“Additive manufacturing in magnets provides multiple benefits,” commented Dr. John Ormerod, Senior Technical Advisor, Magnet Applications Inc. “They have more design flexibility, which is especially beneficial in sensor technology and it creates less waste than in the traditional sintering process.” NdFeB magnets are the most powerful on earth and are used in everything from robotics, wind turbines, electric vehicles, cell phones, electric motors and other consumer and industrial equipment.

“With rapidly advancing technologies, the ability to manufacture the strongest magnet available in any shape without tooling, in any quantity, unleashes so many design opportunities. The work has demonstrated the potential of additive manufacturing to be applied to wide range of magnetic materials and assemblies,” he added. 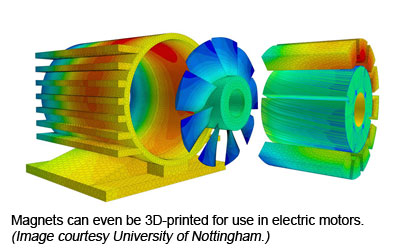 The research community agrees. “The possibility offered by additive manufacturing to extend the design of components to three-dimensional space without the constraints of traditional manufacturing introduces new opportunities towards the production of highly power-dense electrical machines, where the core magnetic material is added only where it is actually needed,” says the INNOVATE research team at the University of Nottingham (UK). “The impact of such innovative devices would be highly beneficial especially for transport applications, where weight is the primary determinant of vehicle efficiency.”

In particular, selective laser melting (SLM), a type of additive manufacturing, might foster the employment of 6.5% Si steels, known for their good magnetic properties such as high permeability, low hysteresis losses, and high electrical resistivity, the researchers continue. “Commercial application of these alloys has been limited due to their poor ductility, which makes their processing difficult. Owing to the powder-based, layer manufacturing approach of SLM, employing 6.5% Si steels for machine cores can now be envisaged indeed.” 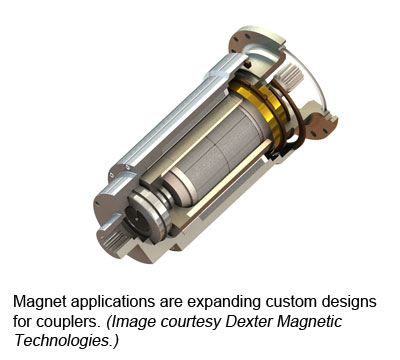 The driver is the portion of the mechanism connected to the prime mover (motor). Through magnetic interaction, the follower reacts to the motion of the driver, resulting in a non-contact transmission of mechanical energy. Non-contact motion transfer has multiple benefits. It allows for isolation of components, minimizing or eliminating mechanical vibrations through magnetic damping and allowing for inserting a mechanical barrier between the driver and follower to separate environments and allow for operation under pressure differentials.

“Magnetic applications allow customizing couplers for an expanding range of properties, such as transferring gripping power for stirring or end-of-arm tooling in robotics,” Takasumi notes. Such systems offer more precision than comparable mechanical or hydraulic applications. It pays to consider magnetics for the higher-efficiency and higher-precision needs of 21st Century production.

Global Motion Control and Motor Market Up 1.9% through Third Quarter