During World War II, American and British soldiers weren’t always able to take full advantage of being allies. Ammunition used by one army wouldn’t always fit the weapons of the other. Screws from a British tank wouldn’t fit an American M4 Sherman. After WWII, these same militaries learned their lessons and worked together to create common equipment and technical standards for performance and maintenance purposes. This effort led to groups of hierarchical standards referred to as MILSPEC in the U.S.

By the 1980s, however, the tail wagged the dog. Defense contractors had to comply with upwards of 30,000 MILSPEC standards to ensure maximum interoperability across armed forces and military platforms. But interoperability came with high costs and long delays as contractors struggled to make sure they complied with every relevant standard. Defense budgets exploded, and under significant criticism, Secretary of Defense William Perry issued the “Perry Memo” in 1994. The memo eliminated the need to require MILSPEC compliance unless the issuing governmental agency sought and received a waiver. Standards that once demanded mandatory compliance now precluded compliance, preferring the cost savings of industrial standards from groups such as ANSI, ISO, SAE, and others.

Like many support industries, machine vision benefited from military support of commercial standards, allowing smaller companies to compete for defense contracts denied them in the past because of costly regulatory requirements. Today, whenever they can, militaries around the globe turn to commercial standards for imaging and electronics, which, in turn, allow commercial markets to benefit from military technological advances. While unique military requirements always will demand customization for certain systems, the machine vision and broader imaging market continue to benefit from the shift away from MILSPEC to commercial standards.

Recent market reports from infrared imaging specialists Maxtech International Inc. and Yole Développement reveal how commercial markets have benefited from military industry support. From 2013 to 2018, Yole Développement expects the overall infrared camera market to grow by 23 percent, with more than 20 percent of that growth coming from commercial markets (see photo). What are the commercial applications driving that growth? They are many of the same markets responsible for the growth of visible sensors used in machine vision cameras: automotive, 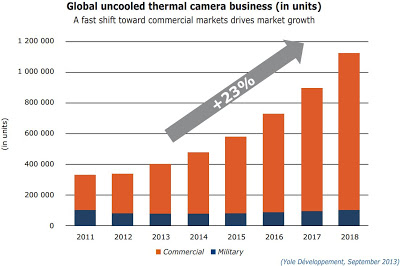 surveillance, thermography, and the emerging night-vision smartphone market. Just as the growth in personal computers drove down the cost of processing data, which benefited the machine vision market, the growth in imaging sensor sales volume and sensor performance also will benefit machine vision producers and consumers.

But just because the MILSPEC sensor has mostly gone the way of the dodo, and market reports reveal that military spending represents a smaller percentage of the overall imaging market each year, that does not mean the military’s use of imaging is dwindling. In fact, cameras have become ubiquitous within the military, mounted on everything from traditional armored platforms to the common infantryman.

NorPix Inc. (Montreal, Quebec, Canada), provider of high-speed digital video recording software and solutions, sells more and more imaging software to the military each year. “They’re primarily using it for research,” says NorPix President Luc Nocente. “Obviously, they rarely tell me what they’re doing with it, but we’re selling it to all of the armed forces. The military tends to work with a lot of different types of cameras. And our software works with any camera with any interface: USB, GigE, Camera Link, analog, compressed, uncompressed … we support them all. Our software also takes in other sensor data, such as IRIG military time stamping and GPS data protocols. So they can acquire images from multiple cameras, each with its own output, overlay location and time data, and store it on any device they like – solid state drives, standard hard drives, whatever. In the past, they’ve done everything from record video from cameras placed around ground vehicles to managing de-icing on plane wings.”

This ability to work with many different types of interfaces also has boosted the appeal of companies like Pleora Technologies (Kanata, Ontario, Canada), a supplier of high-speed video interfaces for military, medical, and automation. Pleora provides a variety of electronics for converting Camera Link, analog, and other camera outputs to GigE.

“Military vehicles are very concerned about size, weight, and power,” says John Phillips, senior manager, product management for Pleora. “The difference in weight between coax cable versus Cat 5 or 6 is only a few ounces per yard – a minimal amount. But when you have miles of coax running through your vehicle, it adds up. So the less weight, the more armor and speed.”

When it comes to putting imaging systems on the smallest of platforms – from soldiers to mini-drones – only custom vision solutions will do. For example, Imaging Solutions Group (Rochester, N.Y.) is part of the General Dynamics team competing for DARPA’s One Shot XG program.

Military snipers may get only one chance to hit their target. That’s why the One Shot program seeks to enable snipers to accurately hit targets with the first round, under crosswind conditions, day or night, at the maximum effective range of the weapon. To achieve this, the One Shot system provides a measured profile of downrange crosswind and range to target. This information is then used to compensate the bullet trajectory to offset crosswind effects and range-related bullet deviations, substantially increasing the probability of a first-shot hit.

“The ISG Imaging System we designed contained a CPU, FPGA, memory, and interfaces to all the various sensors in the system,” says Kerry Van Iseghem, co-founder of Imaging Solutions Group. “The system takes the inputs from all the environmental sensors and uses them to calculate the proper settings to recreate a new ’target’ that the sniper soldier could aim at to hit the intended target. The system is totally contained and manages all aspects of the product.”

The program completed Phase 2E in spring 2013 to reduce system size, weight, and power as well as extend the engagement range. The Phase 2E system will mount on a conventional spotting scope. The next-generation One Shot envisions a compact observation, measurement, and ballistic calculation system mountable on either the weapon or spotting scope. The developed system will measure all relevant physical phenomena that influence the ballistic trajectory and rapidly calculate and display the offset aim point and confidence metric in the shooter’s riflescope in either day or night conditions. The XG system seeks to exploit new technologies to operate over a range of visibilities, atmospheric turbulence, scintillation, and environmental conditions. One Shot XG Phase 2 began in March 2013 and is expected to be complete in Spring 2014.

Economic uncertainty and decreasing military budgets could pose a problem for the developers of imaging technology as defense markets account for a shrinking slice of the overall performance imaging market. However, as the military continues to adopt commercial standards while expanding the number of platforms that use imaging systems and supporting the development and transfer of advanced imaging technology, machine vision companies can expect their role in protecting people from aggression will continue to grow in both overall market terms and the number of market participants.