Linear Motors Part II: The Good, the Bad, and the Ugly 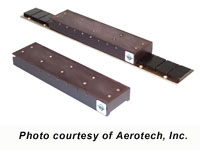 As discussed in Part I, a linear motor can be thought of as a rotary servo motor unrolled and laid flat to produce fundamentally linear motion. A traditional linear actuator is a mechanical element that converts the turning motion of a rotary servo motor into straight-line travel. The two both offer linear motion but with very different performance characteristics and trade-offs. There is no superior or inferior technology -- the choice of which to use depends on the application. Let’s take a closer look.

The rule of thumb for linear motors is that they shine in applications requiring high acceleration, high speeds, or high precision. In semiconductor metrology, for example, where resolution and throughput are critical and even an hour of downtime can cost tens of thousands of dollars, linear motors provide the ideal solution. But what about a less demanding situation? 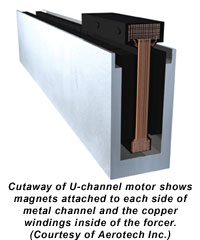 An early issue with linear motors was cost competitiveness. Linear motors require rare-earth magnets, which present one of the limiting factors to stroke length. Sure, in theory, magnets can be lined up practically endlessly, but in reality, quite aside from the challenge of ensuring sufficient rigidity over a long stroke length, the costs mount up, particularly for U-channel designs.

Iron-core motors can generate the same force using smaller magnets than the equivalent ironless design, so if muscle is the primary requirement and the performance specifications are relaxed enough to tolerate some cogging force disturbance resulting in dynamic position or velocity errors, iron-core could be the best approach. If the performance requirements are even looser, on the order of microns rather than nanometers, perhaps the linear actuator combination provides the most appropriate compromise -- choose a linear actuator for drug packaging, say, but a linear motor for the DNA sequencing of drug discovery.

Length of travel
Though plenty of exceptions exist, the optimal stroke length for linear motors ranges from a couple of millimeters to several meters. Lower than that, an alternative such as a flexure might be more effective; above, belt drives and then rack-and-pinion designs are probably better bets.

The stroke length of linear motors is constrained not just by cost and mounting stability but by the issue of cable management. To generate motion, the forcer has to be energized, which means the power cables need to travel with it the full stroke length. High-flex cable and the accompanying raceways are expensive, and the fact that cabling is the single biggest point of failure in motion control overall further complicates the issue. 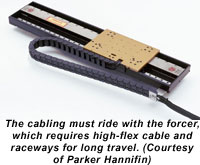 Of course, the very nature of linear motors can yield a clever solution to that problem. “Where we have those concerns, we will mount the forcer to the stationary base and move the magnet track,” says Joseph Profeta of Aerotech (Pittsburgh, Pennsylvania). “That way, all the cables come to the stationary forcer. You get a bit less acceleration out of a given motor because you’re not accelerating a coil, you’re accelerating a magnet track, which is heavier.” Obviously, the inertia of the magnet track must be taken into account in such a design. “If you were doing this for high G’s, that would not be good,” he acknowledges. “If you really don’t have a high-G application, this could be a very good design.”

Profeta cites Aerotech linear servo motors with peak forces ranging from 28 to 900 lbs, but here again, the fundamental design of linear motors lends itself to unique solutions that offer far more. “I have customers who will take our largest linear motors, put six of them together, and generate almost 6000 lbs of force,” says Profeta. “You can put multiple forcers in multiple tracks, mechanically fix them together, and then commutate them all together so they act as one motor; or you can put multiple forcers in the same magnet track and mount them to the carriage holding the load and treat them as one motor.”

Since we live in the real world and it is impossible to match up the commutation exactly, there is an efficiency penalty of a few percent to pay for this approach, but it may still yield the best all-around solution for a given application.

Head to Head
From a force standpoint, how do linear motors stack up to rotary motor/linear actuator combinations? “There’s a significant force tradeoff,” says Ben Furnish of Parker Hannifin (Cleveland, Ohio), who compares a 4-inch-wide, eight-pole slotless linear motor with a 4-inch-wide screw-driven product. “Our eight-pole linear motor has a peak force of 40 lbs (180 N) and a continuous force of 11 lbs (50 N). In this same profile with a NEMA 23 servo motor and our screw-driven product, the maximum axial load is 200 lbs, so if you look at it that way, you’re looking at basically a 20-times reduction in continuous force.”

The actual results will vary depending on screw pitch, screw diameter, motor coils and motor design, he is quick to note, and are limited by the axial bearings supporting the screw. The company’s 13-inch-wide iron-core linear motor can generate 1600 lbs of peak axial force compared to the 440 lbs provided by a 6-inch-wide screw driven product, for example, but the amount of space given up is considerable.

To paraphrase a political slogan, it’s the application, stupid. If force density is the primary concern, then an actuator is probably the best choice. If the application requires responsiveness, for example in a high-precision, high-acceleration application like LCD inspection, the trade-off of footprint for force to get the necessary performance is worthwhile.

Keeping it Clean
Contamination is a major issue for motion control in manufacturing environments and linear motors are no exception. “One big issue with standard linear motor design is the exposure to contamination, such as solid particulate or moisture,” says Jim Drennen, marketing manager at Tolomatic Inc. (Hamel, Minnesota). “This is true for ‘flatbed’ designs and less of an issue for [U-channel] designs.”

“It's very tough to completely seal the solution,” agrees Furnish. “You don’t want to be in a high-moisture environment. If you're going to put a linear motor in a water-jet cutting application, you've got to put positive pressure on it and make sure that it is well protected because the electronics of the linear motor are right there with the actuation.”

In the case of U-channel designs, inverting the U can minimize the chance of particulates entering the channel, but that creates thermal management issues that can compromise performance as a result of moving the mass of the magnet rail versus moving the mass of the forcer. Again, it’s a trade-off and again, the application drives the usage.

It isn’t just the environment that can affect the linear motor -- the linear motor can create problems with the environment. Unlike rotary designs, the large magnets in linear units can wreak havoc with magnetically-sensitive surroundings, for example in magnetic resonance imaging (MRI) machines. It can even be an issue in a more prosaic application like metal cutting. “You get these high force magnets that are trying to pull each one of these metal chips onto the magnet track, so linear motors are not going to perform well in those types of applications without proper protection,” Furnish says.

About Those Applications…
So where is the application sweet spot for linear motors? Metrology, for a start, in areas like semiconductor, LED and LCD manufacturing. Digital printing of large signs is also a growing market, as is the biomedical sector, and even small parts manufacturing, says Profeta, whose customers arrange pairs of linear motors in gantry configurations for assembly tasks. “You want to get as much product throughput as you can, so the high acceleration and speed you can get from these motors is advantageous. One thing we've been doing lately is fuel cell manufacturing; stencil cutting is another.” 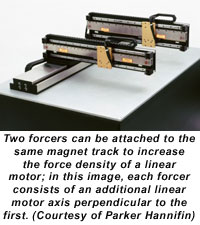 That answers the question of where, but what about the question of how much? Linear motor technology has been under development for decades, so where is it in terms of market acceptance? “For 30 years they’ve been coming of age,” says Drennan. “We don’t bump into them a lot because of the cost, but in certain applications they make a lot of sense.”

“I attribute it to the lifecycle of the consumer,” says Furnish. “You have the innovators, early adopters, early majority, late majority and the laggards. We’re at the stage now that it's becoming more commonplace to use a linear motor. We are shifting into that early majority stage.”

“The price of linear motors is coming down as we optimize the manufacturing process and the volumes go up, so we’re seeing them in more and more applications,” says Profeta. “[Aerotech] also manufactures stages with ball screws. I would say at this point we’re selling as many linear-motor stages, if not more, than ball-screw stages. We’re getting them into more and more applications. Ten years ago, most of the applications were laboratory style, in clean environments. We’re putting them into much more industrial types of operations now. One of the segments I look after is automotive, and we've been putting linear motors into a lot more auto applications.”

“Depending on your setup, you can almost get a linear motor solution for less than a belt drive would cost,” says Furnish. “You have the advantage of a linear motor with the direct drive, the fast response time, and no spring rate like the belt has for a very similar price point. The downside is you don’t have that mechanical advantage of the belt and pulley/gearbox to give you that extra force.”

Upsides and downsides - that really sums it all up. Consider your application carefully, understand your requirements, determine where your flexibility lies. Once you know how to think about your trade-offs, you’ll be in a position to make an informed decision about whether a linear motor or some sort of linear actuator will best serve your needs.

Implementing Safety in a World of Motion Control and Motors

PLCs Run With the PAC